Recovery is coming because the economy has found a new equilibrium. That’s what we are told. Except, that’s not what the data says.

Last week, I laid out the case that US government debt would be $50 trillion by 2030. That was using straight-line CBO projections along with the 2008 recovery pattern for government revenue.

I added in off-budget debt at its $269 billion yearly average. But now, USdebtclock.org projects off-budget deficit will rise by over $1 trillion this year.

With that in mind, it’s not just that we’ll have even higher debt by 2030. It’s that this mounting debt will further slow the recovery. 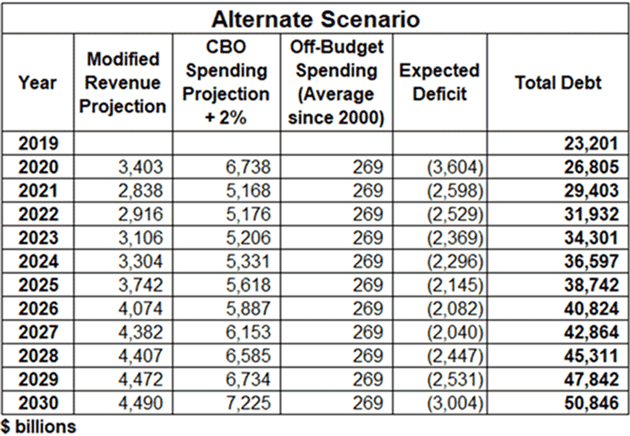 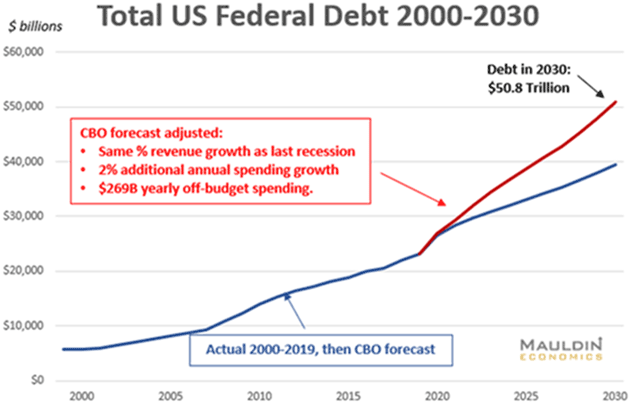 “Net Interest” is a significant and growing slice of federal spending. When your debt balance is measured in trillions, even tiny interest rate differences matter.

Uncle Sam gets a good deal because investors believe their Treasury purchases carry no credit risk. The main concern is inflation. That’s because enough of it could drive rates higher and raise the government’s borrowing costs.

Even the CBO’s optimistic projections show tax revenue barely covering “mandatory” entitlement spending and net interest in the next few years. Congress will have to either find more revenue or make big cuts to “discretionary” spending—which includes most of what we think the government does: defense, diplomacy, regulation, etc.

That could get ugly.

However, the CBO projections are likely wrong. Their borrowing cost estimates depend on interest rate assumptions that have been unreliable, to say the least.

The dotted lines below show CBO’s annual projections vs. the actual yield. You can see reality has been almost always lower than it thought. 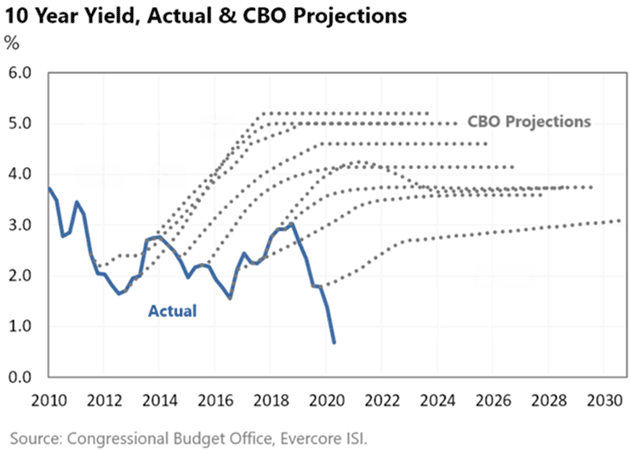 Of course, when you’re planning a budget, you want to err on the side of caution. It helps avoid nasty surprises.

The government’s interest costs have been mostly lower than expected because interest rates were lower than planned. 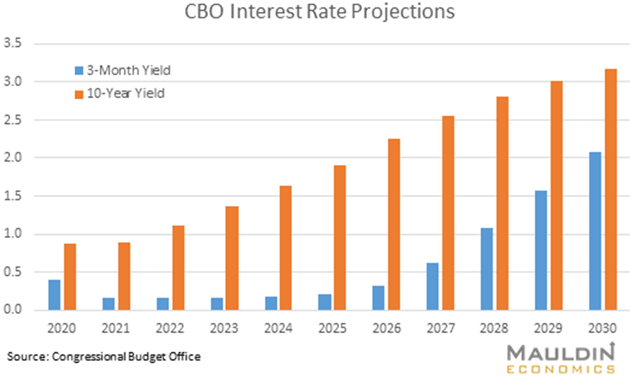 CBO expects a steady rise in the 10-year bond yield after 2021. Note, the government’s borrowing costs depend heavily on the maturity at which debt is issued and then rolled over. (Since no one expects the government to actually pay it down.)

With long-term yields now at historic lows, it seems to me it should back up the truck and sell as much 10-year paper as the market will buy.

That’s what any CFO would do in this environment: Borrow as much as you can for as long as you can.

Let me make it an even more aggressive assumption. If the government really thinks the 10-year is going to 3% in 2030, it should be selling every 30-year bond it can at 1.45% or 20-year bonds at 1.23%. Perhaps see if the market would take 50-year bonds, as some countries have.

While I don’t think we will do it in the next year, it would not surprise me that in the future we will sell something that looks like the old British consols, which were interest-only perpetual bonds. (Historical trivia: The US sold consols in 1870 at 4%. They have all been redeemed.)

The Federal Reserve is another factor in the government’s favor. It uses excess bank reserves and its own balance sheet to buy Treasury debt, then gives the interest it receives right back to the Treasury. So that part of the federal debt is effectively at 0% interest.

I believe the Federal Reserve will engage in Yield Curve Control if long-term interest rates move too high. That is, of course, financial repression and a monster body blow to the retiring Boomer generation.

To be fair, there are reasons to think a $50 trillion debt load is manageable. It depends on what you consider manageable is. Maybe survivable is a better word. But it will clearly slow or kill GDP growth. Think Japan and Europe.

I used to say Japan was a bug in search of a windshield. Will the same be said of the US?