Last year’s holiday sales season was one of the strongest in years. But unfortunately for America’s struggling retailers, many missed out on the sales bonanza as Amazon and other e-commerce platforms accrued nearly all of the sales growth while foot traffic at US malls was stagnant. Already, Kohl’s and Macy’s have helped crush the narrative of the strong consumer by slashing their earnings guidance, something that doesn’t bode well for Q4 GDP, thanks to what we warned would be an unsustainable inventory build up that has inflated growth numbers in recent quarters.

The retail space has already seen the first headline-grabbing retail bankruptcy of the year (see: Gymboree). And as Bloomberg warned in a story published this week, even after high-profile bankruptcies including Sears and Toys R’ Us, the “retail apocalypse” is far from over.

Though the Fed has capitulated to the whims of the market, retailers still make up about one-fifth of the universe of distresses borrowers. And on Friday, the head of the biggest mall owner in the US warned that more bankruptcies are coming this year. Economists are increasingly worried about a recession this year or next.

Simon Property Group CEO David Simon told investors on Friday during a conference call that there are chains that his company is “nervous” about. Anybody who has traveled to a US mall recently may have noticed this change: Where once there were shoppers, now they halls look disconcertingly empty. 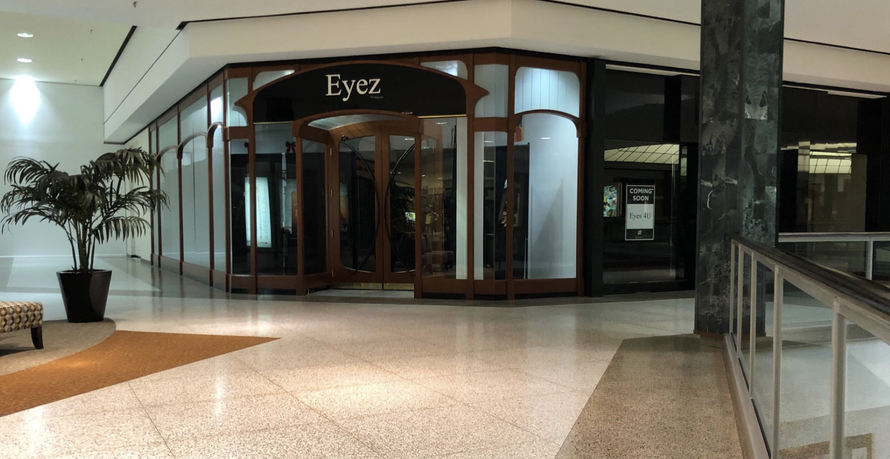 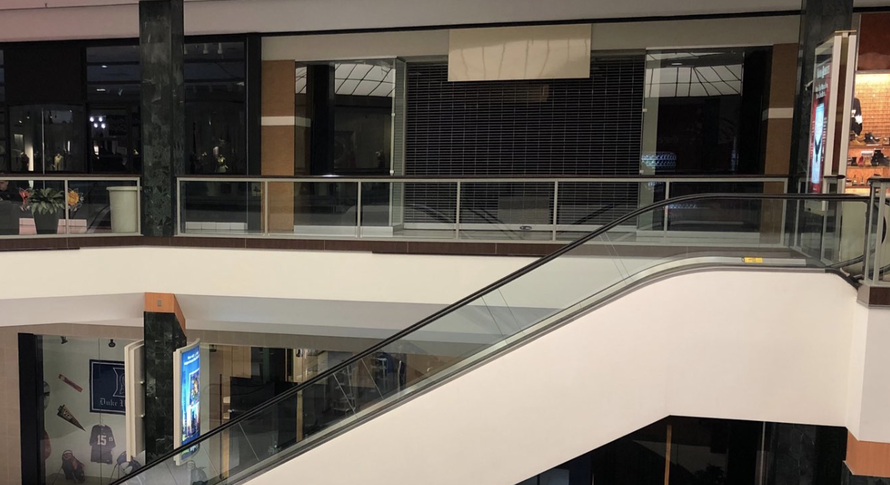 As Barry Bobrow and Lynn Whitmore at Wells Fargo Capital Finance warned, the industry is likely heading for a “prolonged restructuring” as the pre-crisis debt binge undertaken by retailers continues to haunt the broader industry. Retailers who are already weighed down with debt are also facing pressure to innovate and pivot to e-commerce. But their financial pressures are leaving them little wiggle room. Put another way, the problems facing Sears are effectively an extremely acute version of the problems facing the broader industry.

“We’re heading more and more into a distressed market,” said Bobrow, managing director at Wells Fargo Capital Finance. Whitmore, managing director of retail finance, says retailers are laboring under debt levels that “just eclipses anything we saw in the recession.”

Still, there are some reasons to be optimistic. Some chains have improved online sales, which Moody’s said could increase operating income by 5% or 6% this year. The ratings firm raised its outlook from stable to positive in October, the first shift since 2015. Only about 4.9% of retail mortgages were overdue in January, down from more than 6% at the start of 2018. However, these sunnier data points can largely be attributed to the fact that many of the biggest struggling retailers have already failed.

And defaults continue to be a problem. Default rates on retail junk bonds have risen to 10.2% as of December, according to Fitch Ratings, more than double the level from the same period in 2017. 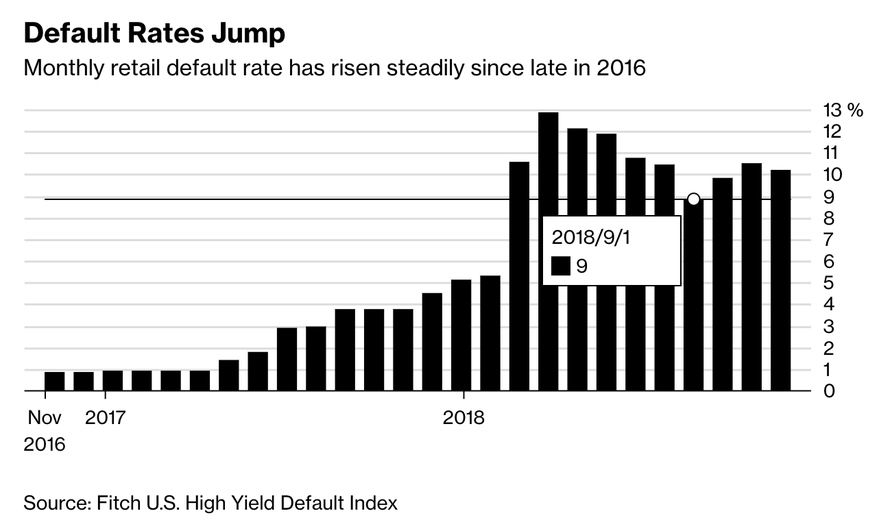 With that in mind, Bloomberg has published a list of some of the most troubled large retailers who could be at risk of bankruptcy during the year ahead.

The luxury retailer is saddled with nearly $5 billion of debt after its 2005 leveraged buyout and its 2013 sale to another set of private equity owners. The retailer has a $2.8 billion loan due next year,and has too much debt relative to its earnings, Moody’s analyst Christina Boni said in an interview. “If we had a magic wand and could get rid of their balance sheet issues, Neiman could move forward, focused on its core operations,” she said.

The retailer’s 8 percent notes due October 2021 trade at less than 50 cents on the dollar. Its first round of talks with its lenders ended last year in stalemate. The company is trying to talk to creditors again to cut its borrowings. A representative for the Dallas-based retailer said the company is confident it can come to a “mutually beneficial solution” with stakeholders. Neiman Marcus is in full compliance with debt agreements and has ample time to refinance its debt, the representative said.

NM is facing a veritable “debt wall” that will be almost impossible for the company to surmount without new financing. 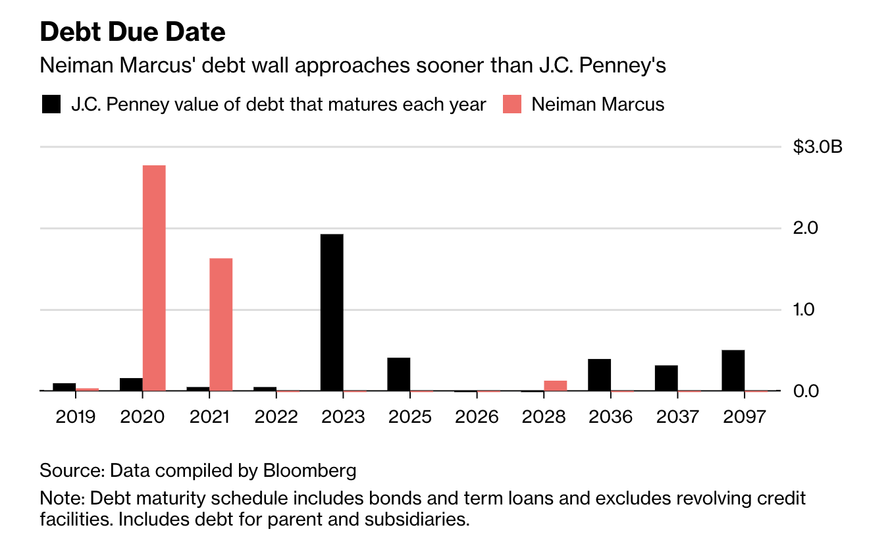 Two of the largest pet supply stores continue to face competitive pressures from mega-retailers like Amazon.com Inc. and Walmart Inc. Both PetSmart and Petco have struggled to improve their online sales to help keep competitors at bay.

PetSmart acquired Chewy.com in 2017, taking on $2 billion of additional borrowings in the process. Unfortunately, PetSmart’s earnings are declining, making it harder to carry its debt, Moody’s analyst Mickey Chadha said.

A representative for PetSmart said, “The pet category continues to grow. While we continue to experience customer channel shift to online at PetSmart, we feel we are well positioned to capture and benefit from the growth in online through Chewy, and we are gaining market share on an aggregate basis.”

Petco has less debt, Chadha said, but it remains to be seen whether its own online platform can stay competitive, and both chains are at risk of losing exclusive products that draw shoppers.

A representative for Petco said the company rebuilt momentum last year and returned to growth. The company focused on improving nutrition in their pet food, expanded its grooming, training and veterinary services businesses, and achieved “double-digit growth” in e-commerce, the representative said.

J.C. Penney has been through it all: boardroom battles, lawsuits, management turnover, activist battles — and that was just in 2013. In the five years since, it has had three CEOs. The current head, Jill Soltau, took over in October and said the retailer is on track to generate free cash flow in the latest fiscal year and reduce its bloated inventory.

A spokeswoman for J.C. Penney said that credit rating firms have maintained their highest liquidity rating for the retailer, and it has only $160 million of its more than $4 billion of debt coming due in the next four years.

Over the past four years, the owner of brands such as London Fog and Mossimo has endured a U.S. Securities and Exchange Commission accounting investigation, which isn’t over, and the departure of its founder as sales steadily slid. Now, Iconix has around $700 million of debt, including more than $100 million of busted convertible notes due 2023, which trade at about 44 cents on the dollar.

It’s even fighting with Jay-Z over his Rocawear brand, which it acquired in 2007. Eric Rosenthal, senior director of leveraged finance at Fitch Ratings, says the company is a “likely default” this year. Representatives for Iconix didn’t return requests for comment.

As if the situation wasn’t already dire enough, just imagine what the impact could be when the next recession finally arrives, or trade talks fail and Trump moves ahead with the next round of sanctions – or both happen simultaneously.

See also  Miami Cubans are getting pissed at Biden…
732 views