The richest people on Earth lost $511 billion this year after record first-half gains were obliterated by a succession of bruising market selloffs.

Global trade tensions and worries about a U.S. recession dragged markets lower at year-end, leaving the 500 people on the Bloomberg Billionaires Index with a combined net worth of $4.7 trillion as of Friday’s close. It’s only the second annual decline for the daily wealth index since its 2012 debut, and represents a sharp about-turn from the start of the year, when bullish investors helped propel the fortunes of the richest to a record $5.6 trillion.

See also  NY Gov. Cuomo: "We have to knock on those doors, and we have to convince people, put them in cars"

“As of late, investor anxiety has run high,” said Katie Nixon, chief investment officer at Northern Trust Wealth Management. “We do not expect a recession, but we are mindful of the downside risks to global growth.” 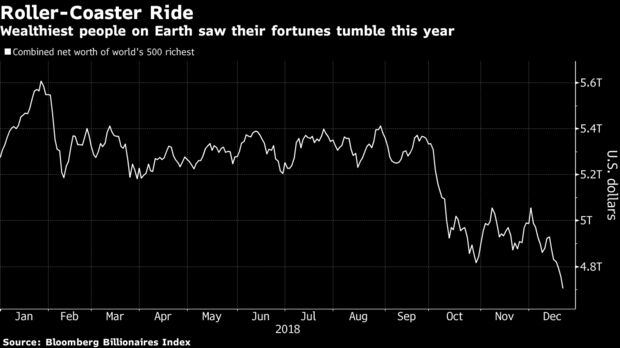 Even Jeff Bezos, who recorded the biggest gain for 2018, wasn’t spared the volatility. His fortune peaked at $168 billion in September, a $69 billion gain. It later tumbled $53 billion – more than the market value of Delta Air Lines Inc. or Ford Motor Co. – to leave him with $115 billion at year-end.

See also  Sydney lockdowns will continue until Christmas unless 80% of people get vaccinated says the Prime Minister, Scott Morrison

The Amazon.com Inc. founder had a better year than Mark Zuckerberg, who recorded the biggest loss since January, dropping $23 billion as Facebook Inc. careened from crisis to crisis. Overall, the 173 U.S. billionaires on the list – the largest cohort – lost 5.9 percent from their fortunes to leave them with $1.9 trillion…