My friends, I am sorry to say that I think the next year will probably be a perfect storm!

The bottom line is simple: the Empire is dying and this puts the entire planet at risk of war.

Do not worry too much about Russia: she is fine ready for everything and anything the Empire might throw at her.   [T]he hyper-cautious, some would say “flaccid”, policies of Putin towards the endless stream of sanctions and provocations by the West has given Russia the time she needed to prepare…. 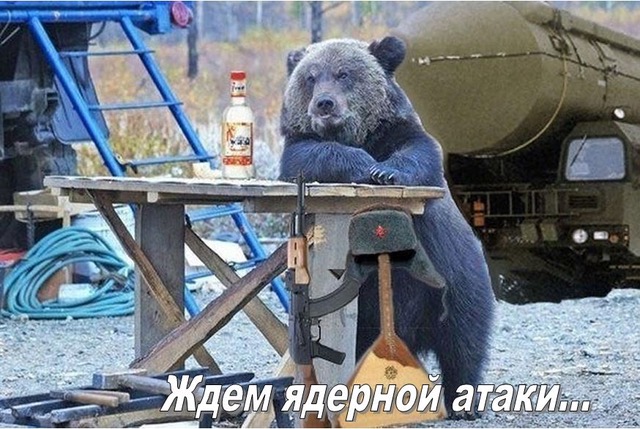 Translation: we are waiting for your nuclear attack

The “show” is also over for the puppet President in the Ukraine and for his neo-Nazi masters (see here for a discussion).

Latin America is in deep turmoil.  Uncle Shmuel has successfully ousted the legitimate leaders of Brazil and Bolivia….

As for Africa, Central Asia and the Indian subcontinent – they are all under various degrees of crises.

I believe that next year a major political crisis in the USA is inevitable.  Furthermore, both Europe and the Ukraine are on the brink of major political and economic problems.  And, finally, there is, in my opinion, a real possibility for a large scale war involving the USA and Israel: a war they will inevitably lose, thus creating a huge risk of nuclear strikes (at least in the Middle East).

Prepare for a major crisis

Make sure that most of your money is not in any bank (get small silver or gold coins; ammunition and medicines will also become currencies if things get really ugly), prepare emergency food rations.  Stock up on weapons (handguns and/or rifles) and the needed ammo if you can.

If possibly, try to locate/organize some place you can go and remain for a month or so (no less!).

The worst places to be in case of a severe crisis are 1) big cities 2) isolated rural cabins/homes.  I know that some survivalists advocate the “bug out” option, but in reality, unless you are in a group and well-armed, I consider this a dangerous option. The safest place is to be in a community,preferably a small town, where you have friends and you know and trust your neighbors.

Second, assuming that we don’t have a full-scale war or major social violence, prepare for economic hardship: even if you keep your job, your income will likely go down.  If you are self-employed, make sure to stock on whatever goods you need to provide your services. If you work for somebody else, prepare a “plan B” in case you get laid-off.

I am not an economist, so take that with this caveat in mind, but all my contacts in venture capital firms and traders all tell me that the US and EU economy are so enmeshed that if one collapses, so will the other.