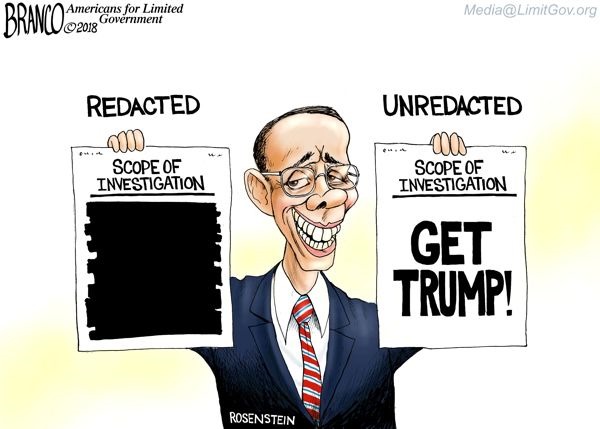 We are hearing a lot these days about how documents reluctantly provided to congress by the Department of Justice and the FBI have been heavily redacted, rendering them almost indecipherable.  The operative word here is “almost.”  There have been enough unredacted words or phrases in the documents submitted to congressional authorities to suspect one of the biggest cover-ups in American history.

The FBI is inadvertently leaving small breadcrumbs exposed for congressmen to seek further information and question why this or that redaction was made, if it appears there is no reason why the redaction should be classified given the context a particular document.  No intelligence source or method appears to be in jeopardy.  The only thing in jeopardy appears to be the reputation of DOJ and FBI officials.

The latest redaction contretemps involves a text message in which Peter Strzok (a key FBI official involved with the Clinton email probe and, for a while, the Trump-Russia collusion probe) tells his FBI lawyer girlfriend, Lisa Page, this after he returned from a trip to London for an FBI investigation: “And hi. Went well, best we could have expected. Other than [name is REDACTED] quote: “the White House is running this.”

Needless to say, this redaction caught the attention of congressional staffers who are looking into how the Department of Justice and FBI handled the Clinton and Russia investigations.  Senator Chuck Grassley shot off a letter the other day to the DOJ asking why the name of the person who said “the White House is running this” is redacted.  More important, Grassley wants to know why someone in the White House is running an activity involving the FBI.  Apparently, the FBI editor, who was responsible for redacting this particular text message by Strzok, failed to understand why such a tidbit of information would attract congressional attention.

Another text message written on August 15, 2016 by Peter Strzok received similar attention by congress and the main stream media.  An unredacted portion of his text message interchange with Lisa Page says, “I want to believe the path you threw out for consideration in Andy’s office – that there’s no way he gets elected – but I’m afraid we can’t take that risk.  It’s like an insurance policy in the unlikely event you die before you’re 40.”  Many observers believe the insurance policy Strzok is referring to is a plan to destroy Trump if, against strong odds, he should get elected president.

The FBI redactor in these and other cases is either incompetent at the art of a cover-up or he is a master of Freudian slips.  Either way, the onion of a mega-scandal is being peeling back slowly but surely and it doesn’t bode well for senior managers at the DOJ and the FBI, and where things may be heading for the Obama White House.  Astute congressional staffers can piece together redactions and where they appear in a document to surmise what or whom the deleted text is referring to.  And in some cases, it is evident that the deleted text has absolutely nothing to do with national security.  For example, the cost of a conference table in Ex-FBI Deputy Director Andrew McCabe’s office was redacted.  It was later discovered that the table cost $70,000.  It is obvious that the FBI redactor simply wanted to prevent anyone outside the Bureau from finding out that taxpayers had picked up the tab for an extravagant piece of office furniture.  The redaction in this particular case tried to cover-up an embarrassment and had nothing to do with classified information.  How embarrassing then would it be for the FBI and DOJ officials to be caught covering up a cover-up in the Clinton email case or be caught spying on Trump’s campaign or his administration after he was elected?  It would probably be embarrassing and incriminating enough for them to stonewall congressional requests for their files and then redact the hell out of them once they were compelled to deliver them.  And that’s exactly what we have been observing for some time now.

Fortunately, redactions can, with enough political or judicial pressure, be unredacted if it can be shown that their exposure poses no risk to national security or the safety of intelligence sources and methods.

If the objective is to keep congress and citizen watchdog groups at bay, the failure to redact telltale words and phrases probably indicates that rank-and-file FBI agents are not involved in the cover-up because they are famous for their attention to detail.  The questionable handling of the Clinton email probe and the Trump-Russia collusion investigation appears to be result of decisions made by officials at the top of the organization, who let the application of equal justice take a backseat to politics.  As a result, redactors are spending their time attempting to throw sand in our eyes, but stubborn facts have a way of showing through the smokescreen.

By leaving loose threads of incriminating evidence in the visible portion of the text, redactors are doing our congressional representatives a favor in their search for the truth.  Each redaction that is shown to be unjustified undermines the credibility of FBI and DOJ leaders, which, in turn, stimulates their congressional overseers to demand more records and more transparency.  Eventually, the entire house of cards will collapse.

The image in the cloudy mosaic is beginning to rear its ugly head.  And that image shows that our land’s top law enforcement officials weaponized our justice system to protect one party’s presidential candidate while attempting to destroy her opponent.  We can thank sloppy redactors for helping congress in the pursuit of the truth even though that wasn’t their original intention.