Each year the IRS releases aggregate data on individual income taxes, with a two-year delay. The Tax Foundation helpfully organizes the reports, and in January they released their summary of the data for 2015.

But we know averages can be deceiving, and this one certainly is. Most people paid well below that rate, and a small number paid a great deal more.

We’ll start at the bottom.

Note, that’s the lower half of taxpayers—meaning they filed tax returns. There’s a large group below them who didn’t have to file because they had no taxable income. So well over half the population either paid no income tax at all or paid a very low percentage rate.

Jealous? You shouldn’t be.

Do the math and you’ll see the average AGI for this bottom half of taxpayers was only $16,211. These are not wealthy people. Literally, housing and food and other basics are critical issues for them.

Most were employed in some way for at least part of 2015, since they have income, but they didn’t make much. The system is designed to give them a break on taxes, and it worked.

At the same time, this income inequality has a frustrating consequence: the other half of taxpayers bear almost the entire burden. Note that the top 10% pay 70% of income taxes. The top 50% pay 97%. 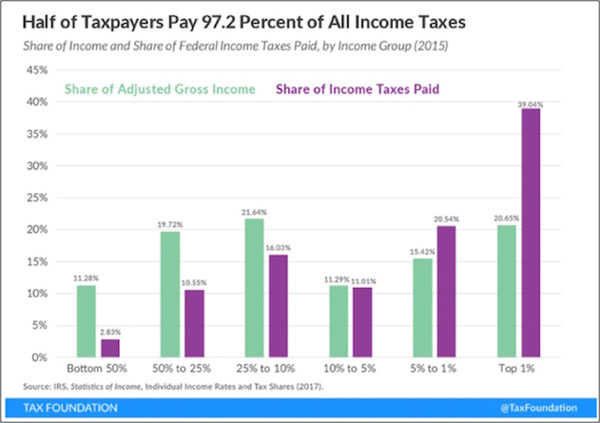 By design, it gives those at the bottom a lower rate.

In fact, it favors more than just that bottom half. As the chart shows, everyone except the top 5% pays a lower share of the total income taxes than their share of total income.

That’s not necessarily true of every taxpayer, since these are averages, but it’s certainly true for most.

The top 1%, which we are often told gets wildly favorable treatment, doesn’t look so lucky by this measure. It only received 20.65% of the income but paid almost 40% of the taxes.

Let me point out again, this tax structure is not an accident. The tax system is designed to produce this result. The public wants the wealthiest Americans to pay a higher percentage of their income, and they do. Provisions that reduce taxes for the middle and lower classes mean those in the top brackets pay more.

In other words, we have a highly progressive income tax system by any fair definition.

The New Bill Raise Taxes for the Rich

Changes in the recent tax bill will make the system even more progressive starting this year.

You would never know that if you read the media, which seems to think that the tax bill was a panacea for the rich. Wealthy people in high-tax states will certainly have to pay more.

But that’s the responsibility of those state governments, some of which seem intent on driving out their best revenue sources.

Laura Saunders, writing for the Wall Street Journal, uses analysis from the nonpartisan Tax Policy Center to demonstrate that the very top earners will now pay an even higher percentage of overall taxes.

According to Roberton Williams, an income-tax specialist with the Tax Policy Center, the share of taxes paid by the top 5% will rise despite the fact that people in it were the largest beneficiaries of the overhaul’s tax cut, both in dollars and percentages.

This is a vastly different picture from what the public perceives.