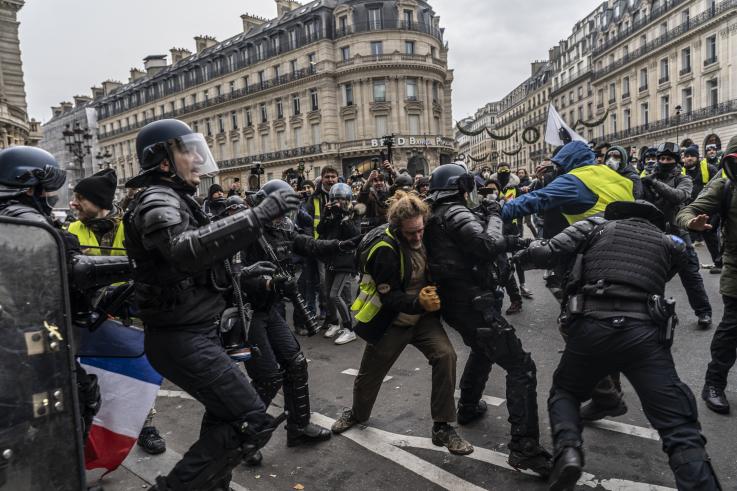 In every hierarchical pyramid of social control it’s essential for the elites to be protected by their guards.

If the praetorian guard ever turns on the Emperor, well then it’s all over.

For a long while, harkening back to the Ferguson protests in the wake of the Michael Brown shooting, I’ve been observing that if the police ever stopped to think about it, they’d quickly figure out that they are on the same side as the protestors in most cases.

New York’s finest should have joined the Occupy Wall Street crowd, not subjected them to intimidation and surveillance.

The various Sheriff’s forces and mercenaries arrayed against the Standing Rock water protectors could have and should have refused the job of being antagonizers and intimidators as they too need clean water and respect for the land.

On and on through every opportunity to suit up in riot gear and/or go under cover as agents provocateurs, the police should have refused on the principle that what the people were clamoring for were also in the police’s own best interests.

But some activists are calling on police to walk out on government negotiations, close down police stations and join the “gilets jaunes”—or yellow vest—protesters with whom they have been facing off since November 17.

Negotiations between three unions—Alliance, UNSA-Police and Unity-SGP-FO—and Interior Minister Christophe Castaner on Tuesday failed to reach a settlement.  As talks resumed on Wednesday, France 24 reported that activists were calling on forces across the country to commit to a “slowdown” and only respond to emergencies until the dispute had been settled.

Police have accumulated some 23 million hours of overtime that is yet to be paid. According to The Local France, police union leader Frédéric Lagache explained, “Faced with this irresponsibility [of the government], we are forced to be irresponsible in our actions.”

The Alliance and Unity-SGP-FO unions called for a “black day for the police” on Wednesday. The Alliance is using Twitter and Facebook to rally support for what it calls “Act 1” of the police protests, using the name given to the ongoing demonstrations held by the gilets jaunes. The group has also threatened to hold “Act II” and “Act III” if required.

Unions have already warned the government over a newly proposed budget set to be adopted Thursday, which Alliance said would cut around $70.8 million from the national police budget.

Such a blow would further degrade conditions for police amid their most pressing deployments for years. Denis Jacob, a spokesperson for the Alternative Police union, said the police are already “at breaking point.”

The government is offering a one-off bonus of around $342 to each officer deployed to face the gilets jaunes protests, totaling around $37.7 million. But this may not be enough to placate a force that claims to have been overworked and underpaid for years—unpaid overtime, for example, totals around $313 million nationwide, Le Monde reported.

Yeah, a whopping $342 dollars.  “Is that enough for you to bust a few heads for us Pierre?”

READ  RON PAUL: Vaccine Passports Might Be The Thing That Makes People Wake Up And Say Enough (VIDEO)
READ  It's happening 43 cases and 6 deaths

At any rate, the police are unhappy, and are probably noticing that they are in the unpopular position of having to beat up on their own ordinary citizens with legitimate gripes and grievances, and nobody likes to take off their uniform only to be reviled at the café and spit upon.

Further, the police’s own pensions and budgets are also under constant withering attack by the ever-rapacious elites who cannot possibly siphon off and squirrel away enough funds for themselves in overseas accounts.

Eventually it all; reaches a breaking point and it is then that the elites re-re-re-re-discover that they are but a tiny fraction of the physical population, and embarrassingly often without any useful skills when it comes to self-defense and connecting with the average person.

It’s spreading…and it will continue to spread as net energy continues to fall, the economic pie stagnates and then shrinks, and the elites attempt to stick the bills with those least responsible for them.