by Umar Farooq
Investors are reconsidering the effects of Donald Trump’s presidency. Markets have been on a bull run since the real estate tycoon was elected president in November. Wall Street’s S&P 500 hit record highs in recent days, while bond yields rose and the dollar reached a 14-year peak on hopes Mr. Trump’s proposed economic policies would deliver faster US economic growth. But after placing big bets on Trump presidency, investors are now wary as the president-elect’s first press conference contained no further detail about his proposed fiscal stimulus and infrastructure spending plans.

The US Dollar index fell a little over 1.5 percent from Wednesday highs today following President-elect Donald Trump’s first press conference since July. While many topics were covered, the particulars for the economy and trade which concern traders and investors were fewer than many had hoped. 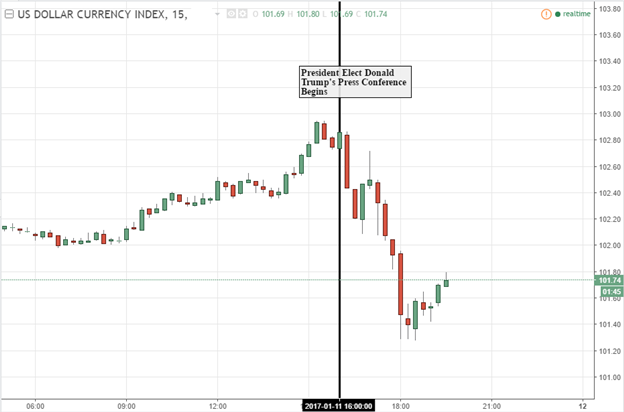 Source: goo.gl/XKQHyR
The dollar sank to a five-week low below 114 yen on Thursday and was on course for its worst week since November, hit by a loss of confidence in the U.S. reflation trade which has dominated markets since Donald Trump’s election.
The dollar was driven higher on Wednesday in expectation that Trump’s first news conference since his election as a president on November 8th would give more detail on new fiscal spending and tax measures to repatriate U.S. corporate capital held overseas. Mr. Trump’s speech instead was dominated by debate over Russian hacking and uncorroborated claims that he had in the past been caught in a compromising position in Moscow. The dollar rallied leading up to the press conference, but declined soon after.
“Investors were hoping for specific answers pertaining fiscal policies and tax reforms, but Trump did not address those. Instead it was more focused on bashing China and Mexico,” said Steven Englander, global head of G-10 currency strategy at Citi.
The greenback has increased more than 5% in value over the past three months, driven in large part on anticipation that Trump’s fiscal policies could speed up the economic growth and increase the inflation. That also carries the risk that the U.S. Federal Reserve will decide to raise interest rates at a pace faster than investors currently expect. Higher rates would boost the dollar by making U.S. assets more attractive to yield-seeking investors.
“If the markets believed that Trump was going to talk up the economy, announce all sorts of fiscal stimulus and generally be bullish, they were sadly mistaken,” says David Govett, head of precious metals at broker Marex Spectron. “I have to say that anyone who thinks this presidency is going to be all sweetness and light really needs to take a harder look at the man himself.”
Although, the greenback is losing steam against the major currencies, disappointing stakeholders, however, despite this initial little setback, Donald Trump’s expansionary fiscal policies for the United States are likely to strengthen the US dollar in the years to come. Investors eye the likelihood of higher inflation and boosted productivity/growth under the new policy impetus as they eventually gain traction in the longer run.