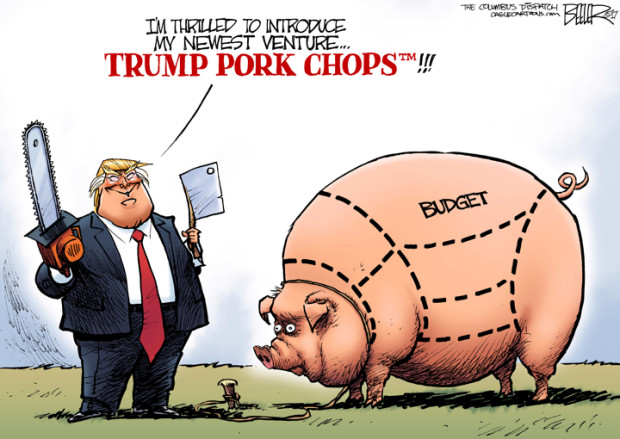 The Democrats are up in arms about the Trump budget. Cruel, Barbaric, Mean are some of the nicest words they have used to describe it and it just goes downhill from there. As usual the spokespeople of the Trump administration have not been able to defend the budget effectively so it falls upon independent bloggers like me to get the truth out the best I can. On a side note I am convinced Trump would be better served if he outsourced his messaging to independents , 4chan, and reddit. We would do a better job than his current team.
The primary line of attack the democrats are using is that President Trump is cutting 800 billion dollars from Medicaid therefore he is throwing grandma off a cliff. This is not true. The budget actually adds more money to medicaid and other entitlements every year. This is what is actually happening. There is a projection of how many people would be enrolled for Medicaid in the future and that medicaid would need a certain amount of money in the future. If you allocate less than that then the democrats deem it as a cut. If you are on medicaid this year and next this will not affect you.
Philosophy
The philosophy behind the budget plays a major part in the conflict here. When democrats and republicans make a budget they expect that the amount of people seeking entitlements will increase or stay at the same pace that they are now. When Trump and sane republicans make a budget they expect that this budget will help people earn more money and therefore this will reduce the number of people who rely on entitlements or at the very least slows the growth of the enrollees.
The budget is the blueprint of your plan for the economy. It is what you would like the economy to achieve. With the plans they present if the democrats are successful then you would have more people enrolled via welfare than ever. If the Trump plan is succesful then you would have fewer people enrolled for entitlements. Remember the budget is only supposed to be for one year. If it turns out the projections are not working then you can always add more money in the future. In essence the democrats want people mired in poverty and living of entitlements while Trump and sane republicans are taking a risk to lift them out of it.
Debt
At this point in the conversation it is usually the Republicans that cry out. What about the debt? If the plans to remove more people from entitlements fail then the deficit will be higher than ever. This is true, but then so what?
One thing that republicans don’t like to admit is that if Romney had won the debt would still have gone up. It may not have doubled like it did under Obama but it would still have gone up. If you put the most committed deficit hawk in power during the time of Obama the debt would have still gone up. At the end of the day any meaningful attempts to tackle the debt and deficits will have to go through entitlement reform. That is only possible if people are earning enough that they get out of it and are able to look at it objectively. Presiding over 8 years of supposedly massive growth while ordinary people have the same income they did when your massive growth started will not help it. If we have budgets that promote the status quo where we add more and more people to welfare then nothing will change and the problem will get worse. At some point we have to take the risk and try to lift people off poverty so they no longer need entitlements. Only then will they agree to change it.
Stimulus vs Tax Cut
Everyone democrat who was wildly applauding the stimulus by Obama is now staunchly opposed to the tax cuts by President Trump. The tax cuts and stimulus achieve the same thing. They stimulate the economy by making more money available to people. In the stimulus companies were able to stay open and keep paying their employees while others were able to expand and with tax cuts the same results are achieved.
There is one major difference that has to be pointed out. With the stimulus you gave all the benefits up front. Each company was handed a sack of money from the Obama administration. If the companies did not live up to their end of the deal then there was nothing Obama could do. Incidentally this is also the problem a lot of people have with the Iran deal. Tax cuts are different. They are not sacks of money to be handed out but rather promises that we will not take as much of their income in the future. It is implied that we are doing this so they can employ more Americans and offer higher wages. If this does not materialize then we can always remove the tax cuts.
In the past tax cuts were given but America was not a competitive place to invest in. Companies instead invested in India, China, and other countries. In effect our tax cuts funded their growth. To be completely fair with the corporations it is very hard to invest in a place that says on paper it will take 39.1% of your profits when other places say they will only take 15-20% sometimes less. It is time we used tax cuts to fund our growth.
The Trump budget is good enough. Something needs to be done to attempt to lift people up from poverty. If we keep doing what we have done before we will only achieve the same results.

See also  China punishes Evergrande Executives who knew about the situation, now time for the US to make the same with FED traders, I mean members.
See also  MARKETS A LOOK AHEAD: Is The Stock Market About To CRASH?
686 views

2 thoughts on “The Truth About the Trump Budget”