This tracker is tracking deaths, not cases. 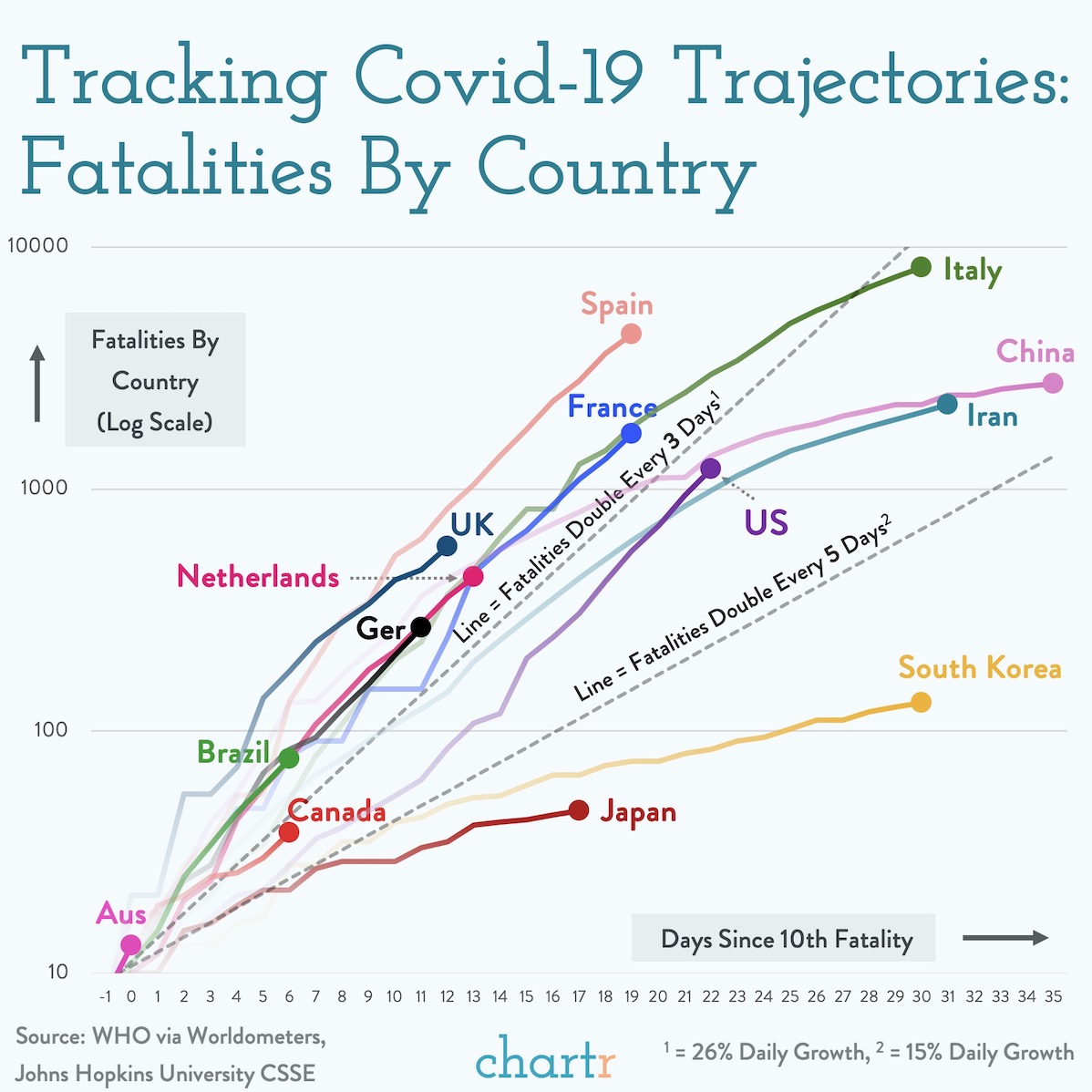 The United States officially has the most coronavirus cases, with almost 86,000 confirmed at the latest count. Sadly, because deaths are mounting and testing rates vary so substantially from country to country, it’s becoming more prudent to track fatalities, rather than confirmed cases.

This latest version of our tracker, inspired by the work of John Burn-Murdoch, tracks the fatalities of those countries most affected. As always it reveals some hopeful, and some worrying, trends about the spread of coronavirus.

READ  The Yield Curve Suggests a Recession is Imminent

1) Italy’s death count has crossed 8000, but crucially the curve is flattening, showing the effects of almost 3 weeks of full lockdown. Iran’s is also slowing.

2) Australia & Canada are a fair bit earlier in their infection cycle, and may be able to flatten their curve by implementing some best practice policies (testing, social distancing) a bit earlier than other countries.

1) The US will probably win the race that no-one wants to win, by likely becoming the first country with 100,000 cases. Its fatality curve also appears to be steepening, not getting flatter. Deaths have increased from 200 to 1209 in just 1 week, equivalent to daily growth of 29%.

READ  “Normally, only 2:1 margin is allowed. However, Robinhood traders are getting around this by using short dated out of the money calls options (with 15:1 margin). This has NEVER been the case, is new, and absolutely is what's driving up demand for TSLA's stock. When it reverses, it will be UGLY.”

2) Many other countries on lockdown, including the UK where Prime Minister Boris Johnson tested positive for coronavirus, remain on trajectories similar to that of Italy and Iran.

3) Brazil has now recorded almost 100 fatalities, with president Jair Bolsonaro arguably taking the most anti-scientific line of any world leader, arguing that Brazilians “never catch anything”.

Our advice? Same as ever, keep self-isolating, keep sticking to the advice of trusted professionals and epidemiologists.