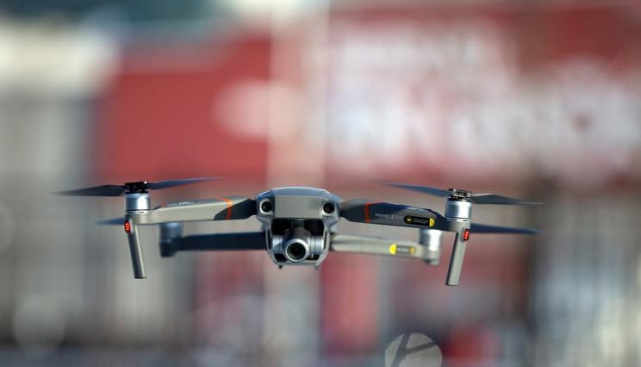 The future is now, old man! Or, to put it another way, despite the bellicose rhetoric, not to mention “hacking” accusations, the US military will use “made in China” drones, because reasons.

Even if this story may not sound like much, it speaks to a bigger issue.  This is the face of things to come.

After years of spying allegations and restrictions, the Pentagon has allowed the military to use two Chinese-made drones. The move has already stirred controversy.

A recent Pentagon report seen by the Hill found “no malicious code or intent” in two drone models manufactured by Da Jiang Innovations (DJI), a Chinese company and one of the world’s foremost drone makers. The report, dated May 6 and reported on Tuesday, concludes that DJI’s drones are “recommended for use by government entities and forces working with US services.”

Almost 80% of all drones used in the US and Canada are made by DJI. However, the US government has been suspicious of the devices for several years. The US Army stopped using them in 2017, and two years later the Department of Homeland Security (DHS) warned US firms against using them, claiming they gave the Chinese Communist Party “unfettered access” to user data.

The Pentagon heeded the DHS’ warning, and grounded all of the military’s 500 DJI drones last year, while the Department of Commerce added DJI to its economic blacklist, along with dozens of other Chinese technology companies. The blacklisting also came after DJI donated drones to 43 US law enforcement agencies at the outset of the coronavirus pandemic, sparking espionage concerns among ‘tough on China’ politicians and analysts.

DJI is not the only Chinese firm dogged by accusations of espionage. Tech giant Huawei found itself blacklisted by the Trump administration, while the Pentagon banned the sale of its phones, along with those manufactured by ZTE, on military bases. Huawei has consistently denied funneling information to the Chinese government, as have ZTE and DJI.

Okay, let’s unpack things. First, the neocons are already whining about China, and you must learn that he had previously introduced a Democrat-backed bill against the US military acquiring drones from China:

My bipartisan American Security Drone Act would ban the U.S. government from purchasing drones made by our adversaries. t.co/bw8d2v8Vbv t.co/iUU463F3ZR

However, things are more complicated than “muh spying”. To begin with, espionage and hacking concerns are literal boomer nonsense, or just dishonest rhetoric.

To give you the most obvious example, think about Huawei, China’s largest smartphone/telecom manufacturer. According to the US government, Huawei is selling smartphones in the US in order to spy on people, but we are never told how.

Huawei smartphones run on a version of Android, and after the US government banned Google software from running on Huawei machines, the Chinese were forced to develop their own OS from Google code.

The US government also claimed that Chinese social media company TikTok is used for spying on Americans. More precisely, on teenagers, since boomers are still on Facebook and YouTube.

The question is: why would China spy on American teenagers? What’s to gain there? Jailbait pictures? What are they even talking about?

However, the US government keeps saying that Chinese companies are spying on Americans, yet here we are in 2021:  the American military cannot source drones made by non-Chinese manufacturers. Even if the military stopped using Chinese made drones back in 2017, they’re now forced to resume the “made in China” program, because in the last 4 years, no American/European company was capable of filling the gap.

It’s pretty clear they put money into this project, but they failed.

And this is the main issue with modern-day America: we rely on China for basically everything, ranging from military drones to antibiotics and anything in between. Why? Because China has a real economy, unlike us.

How did this happen?

Well, woke (as in diversity ridden) American companies are actively destroying their own workers and their own creative base. Just remember that bizarre race indoctrination Lockheed Martin is doing.

Lockheed Martin is the face of the military-industrial complex (MIC), and one of the biggest arms, aerospace and security manufacturers in the world.  Lockheed Martin works almost exclusively with the US military.

Yet, they are incapable of building drones for the US military.

Well, maybe because they are trying to run intelligent white men out of their company.

On the other hand, Chinese companies are not trying to tell their workforce that it’s evil to be Chinese and they should be ashamed of being Chinese and successful.

The question is: why would an intelligent white engineer work for Lockheed Martin and be humiliated like this?

Why would you want to work for America and defend America, when you are constantly brainwashed with “you are evil because you’re white, and America is evil because white supremacy, racism” etc. ad nauseam?

There’s only one reason: for money. America is not a country anymore, but a business, a global kosher market if you want.

There’s no other reason to work for a US corporation other than buckets of money. There’s no identity, no value system, no patriotic sentiment anymore. All of that has been destroyed in recent years.

But, if it’s only about money, why bother with engineering and not going into finance? Wall Street will be the last place in the US to start requiring employees to do race re-education seminars.

The point being, you are not going to have a productive country with this woke anti-white anti-America crap.

Even the US government is now running programmes to teach children to hate themselves for being white, and then they are promoting drugs as the solution to self-hatred.

That’s why all of this money and tech know-how was poured into China since the eighties.

They were promising reforms and so on. Then, all of a sudden here comes Xi Jinping, and China is no longer on-board with the program.