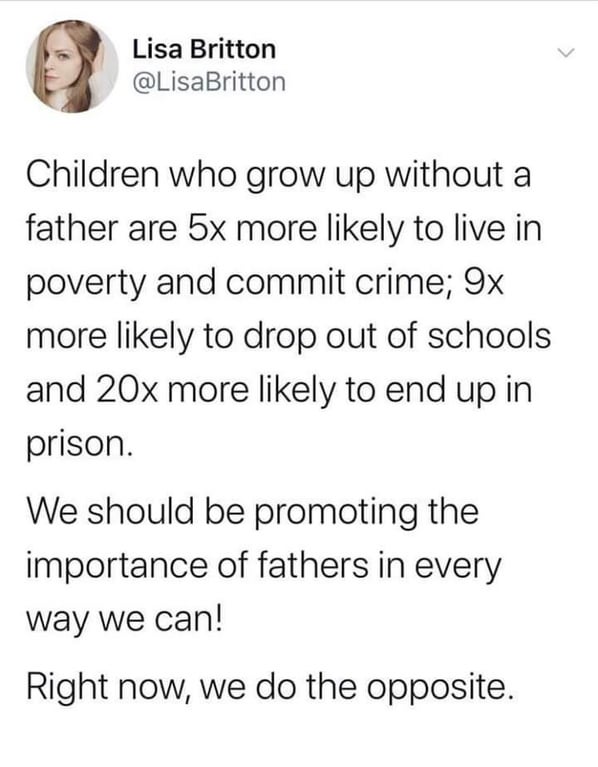 And the data keeps piling up.

Of the 27 deadliest mass shooters, 26 were Fatherless.

63% of youth suicides are from fatherless homes (US Dept. Of Health/Census) – 5 times the average.

90% of all homeless and runaway children are from fatherless homes – 32 times the average.

85% of all children who show behavior disorders come from fatherless homes – 20 times the average. (Center for Disease Control)

Father Factor in Education – Fatherless children are twice as likely to drop out of school.

Children with Fathers who are involved are 40% less likely to repeat a grade in school.

Children with Fathers who are involved are 70% less likely to drop out of school.

Children with Fathers who are involved are more likely to get A’s in school.

Children with Fathers who are involved are more likely to enjoy school and engage in extracurricular activities.

75% of all adolescent patients in chemical abuse centers come from fatherless homes – 10 times the average.

85% of all youths in prison come from fatherless homes – 20 times the average. (Fulton Co. Georgia, Texas Dept. of Correction)

Father Factor in Incarceration – Even after controlling for income, youths in father-absent households still had significantly higher odds of incarceration than those in mother-father families. Youths who never had a father in the household experienced the highest odds. A 2002 Department of Justice survey of 7,000 inmates revealed that 39% of jail inmates lived in mother-only households. Approximately forty-six percent of jail inmates in 2002 had a previously incarcerated family member. One-fifth experienced a father in prison or jail.

Father Factor in Crime – A study of 109 juvenile offenders indicated that family structure significantly predicts delinquency. Adolescents, particularly boys, in single-parent families were at higher risk of status, property and person delinquencies. Moreover, students attending schools with a high proportion of children of single parents are also at risk. A study of 13,986 women in prison showed that more than half grew up without their father. Forty-two percent grew up in a single-mother household and sixteen percent lived with neither parent

90% of homeless and runaway children are from fatherless homes. [US D.H.H.S., Bureau of the Census]

85% of youths in prisons grew up in a fatherless home. [F[Fulton County Georgia jail populations, Texas Department of Corrections, 1992]atherless boys and girls are: twice as likely to drop out of high school; twice as likely to end up in jail; four times more likely to need help for emotional or behavioral problems. [U[US D.H.H.S. news release, March 26, 1999]p>

All Sources for the Above Can Be Found Here