by Chris Black
Jeff Bezos’ blog, also known as the Washington Post, one of America’s most important newspapers which back in in the day was a bastion of investigative journalism, rewrote its State Of The Union headline following a massive backlash on social media from progressives/liberals or whatever you want to call the far left/social justice mob. The initial headline was tweeted by WaPo approximately one hour before the POTUS delivered his SOTU speech. The front-page headline reads: “|A call for bipartisanship”: 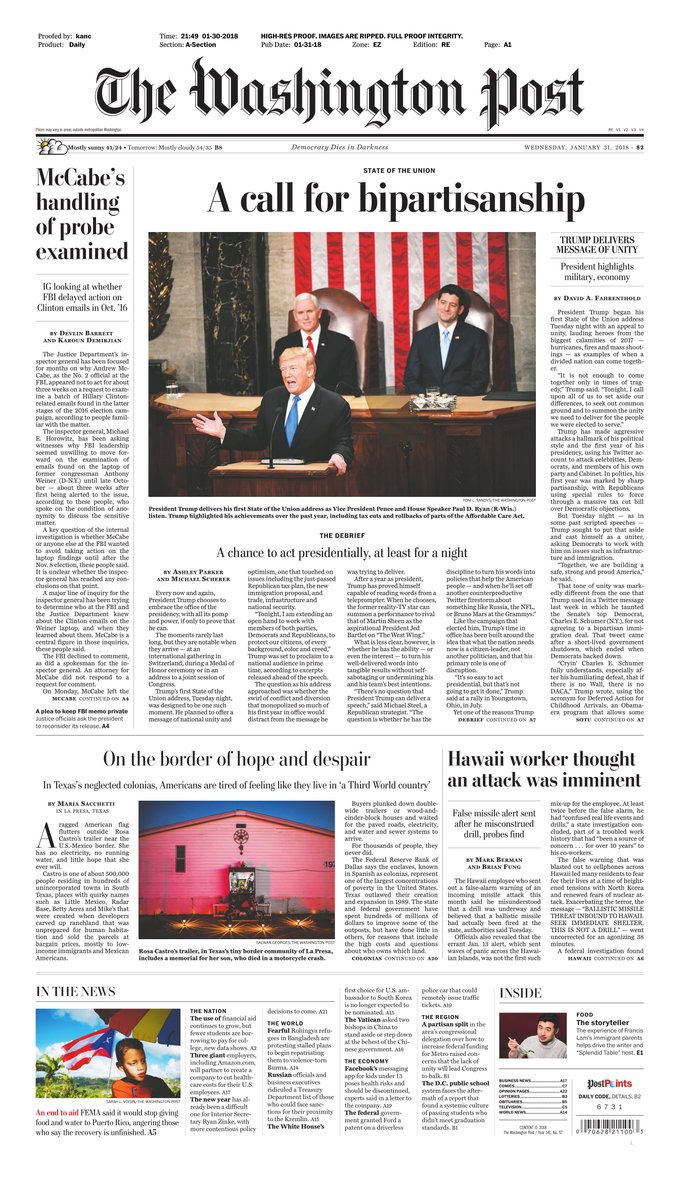 twitter.com/washingtonpost/status/958554913486884864
It’s not very clear why, but WaPo’s readers reacted with furor at the respective headline, erupting in anger on Twitter and saying that the Washington Post staff will regret it tomorrow and various other veiled threats, such as “I am canceling my subscription”:

Congrats on a headline you absolutely, positively won't regret tomorrow.

Are you actually kidding? His mouth said he wanted to work together but the policies he presented, the framing of the policies – it was all designed to be actively appalling to Democrats. There was nothing bipartisan about it at all.

I'm genuinely disappointed in the Washington Post for this headline. I expect you guys to be able to see through the rhetoric and actually see it for what it was – epic country-wide trolling designed to rally Republicans and set Democrats teeth on edge.

twitter.com/LikusPJ/status/958569460167790592
Like any respectable and politically correct establishment which kowtows to social justice and intellectual terrorism, the Washington Post chose not to disappoint its Twitter base and folded under pressure in two shakes of a lamb’s tail, quickly changing the headline of Trump’s SOTU speech:

READ  More than 700 soldiers in the Washington National Guard began deployment in support of NATO's mission in Poland.

This page was updated after the first edition. Here is the final front page. pic.twitter.com/nfR7p2wEPB

Truth be told, the Twitter backlash was pretty intense, with more than 3,000 replies, the vast majority of them being negative, coming from the Anti-Trump #resistance most probably, and maybe a couple hundred Russian bots which were imported from a Macedonian content farm, to quote Hillary Clinton in her infinite wisdom. Now, it’s absolutely mind-blowing to see one of America’s biggest newspapers in real time folding under pressure from social media and changing its headline in order to appease the social justice warriors/never Trumpers or whomever.

However, this is a good thing after all in the grand scheme of things, because it’s refreshing to see the left wing mainstream media constantly demonstrating how partisan they are while purporting to be neutral and objective. There’s a “school of thought” which claims that the Washington Post has to get on the Trump train as soon as possible (I really like the second second head-line better to be honest, but that’s not the issue here) as this week or the next, the FISA memo is going to hit the Democrats hard, and this year DEMs are expecting to get creamed in the mid-term elections, or at least that’s the theory.

And speaking about this year’s hottest issue, DACA/amnesty for illegal aliens, which was addressed in Trump’s SOTU speech last night: if there is an amnesty for these so called “dreamers” (to use the President’s own words, Americans are dreamers too!), they should not be given a path to citizenship. At most, they should be permanent legal residents, but having no recourse to social services such as welfare, voting or other government payments to the poor. If they are given a path to citizenship, it should be Starship Troopers time, where they have to serve in the military (and at best, pull a couple of combat duty tours). Make them show they care enough about America and Americans to put their lives on the line. Moreover: amnesty now and deals for afterwards? Reagan tried that – and regretted it. Trump wrote “the Art of the Deal”?  That works in business, not in politics: when you’re talking about Congress and demoKrats, deals for afterwards are meaningless. If they want a deal, do the opposite: first we build the wall, deport everybody else, outlaw and crack down on chain migration and anchor babies, enforce E-Verify, and end the damn lottery. Meanwhile the DACA people have to check in once a month or they get arrested and deported. Five years from now, when all that’s been taken care of, then those DACA people can have their amnesty.