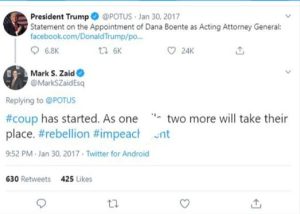 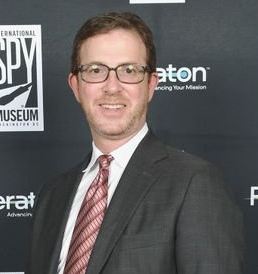 The attorney for the claimed whistleblower against President Donald Trump that the Democrats are desperate to try to hide his identity, Mark Zaid, defended his tweets calling for a “coup” against the Trump. Zaid claims to be nonpartisan but he is obviously not when he calls for a coup against the president of the United States. He wrote in early 2017 that a “coup” against Trump “has started,” and that “rebellion” would come, to be followed by “impeachment.” He is fully on board in the coup to overthrow Trump. He wrote back in July 2017: “We will get rid of him, and this country is strong enough to survive even him and his supporters.”

Anyone else would go to prison for 5 years under the law (18 USC §2385) for this type of statement. He should be immediately arrested and indicted. Then perhaps we will discover who is the whistleblower. He is rejecting democracy and if he choice does not win, then overthrow the government is what he advocates. That is NOT what you would call American or any supporter of democracy. He advocating tyranny which many would consider being treason.

Whoever, with intent to cause the overthrow or destruction of any such government, prints, publishes, edits, issues, circulates, sells, distributes, or publicly displays any written or printed matter advocating, advising, or teaching the duty, necessity, desirability, or propriety of overthrowing or destroying any government in the United States by force or violence, or attempts to do so; or

Shall be fined under this title or imprisoned not more than twenty years, or both, and shall be ineligible for employment by the United States or any department or agency thereof, for the five years next following his conviction.”

This proves beyond a shadow of a doubt that the refusal to reveal who is the whistleblower when his attorney was calling for a coup back in 2017, demonstrates that he is no way impartial. The Democrats are hiding the name for a reason and it violates every principle of Due Process. You have a fundamental right since the American Revolution to face your accuser. That is basic law!

Hunter Biden and his Ukrainian gas firm colleagues had multiple contacts with the Obama State Department during the 2016 election cycle, including one just a month before Vice President Joe Biden forced Ukraine to fire the prosecutor investigating his son’s company for corruption, newly released memos show.

During that February 2016 contact, a U.S. representative for Burisma Holdings sought a meeting with Undersecretary of State Catherine A. Novelli to discuss ending the corruption allegations against the Ukrainian firm where Hunter Biden worked as a board member, according to memos obtained under a Freedom of Information Act lawsuit.

This is starting to appear as yet another made-up story to disrupt and influence the 2020 election. There is absolutely no question that Biden’s son was hired only for influence as was Hillary’s brother in Hati. This is a common practice in politics on both sides that should be outlawed. Biden has no place in government.