Here’s a rundown of how the world economy uses USD and what it does to its value and underlying economy:

The American Dollar is the global reserve currency—an international medium of exchange and store of value for most major countries.

Think of USD like an international Gold Standard, a hedge against volatility or sudden changes in exchange values.

American dollars are the primary vehicle through which international commodities are purchased (e.g. oil) and debts are serviced.

If the world’s GDP PPP looked like a pie:

Where does the world’s supply of U.S. dollars come from?

Unlike a gold standard, the USD is tied to an economy creating inherent advantages/disadvantages, and a Trade Deficit within the U.S.

This deficit is self-reinforcing rather than planned:

Direct access to a high value currency has an unintended side affect on U.S. residents:

How much debt/USD is out there?

In other words, there is an extreme supply/demand issue for USD increasing its value over time.

The strength of the USD impacts growth of non-U.S. markets:

Here is a representation of past and potential future USD values: 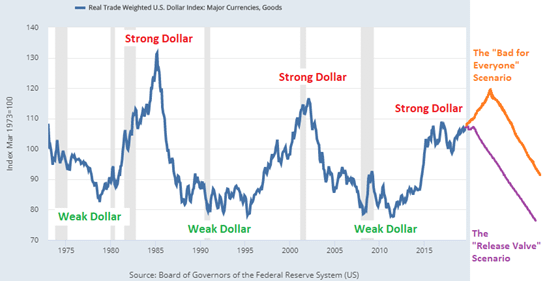 Why should you care?

As international S&P outstrips domestic S&P, the U.S. becomes vulnerable to its own rising dollar value.

In other words, the more revenue the U.S. generates outside of its own economy, the more they stand to lose when they exchange foreign currency back into their own rising USD (e.g.: S&P 500 now receives over 40% of its revenue from international sources).

They are. The effects are somewhat masked by higher equity valuations, corporate tax cuts (boosting after-tax profits), and stock buy backs at the end of each year, increasing per-share earnings, despite company-wide operating income stagnating.

More troubling, is that foreigner investors/governments have been buying very little U.S. treasury notes (debt) since 2015 due its rising cost. As a result, domestic sources have had to buy most of it:

This resulted in temporary, but large USD liquidity drain.

The takeaway from this wall of text:

Newly issued U.S. Treasuries are now funded by newly created U.S. dollars because foreign buyers can’t afford or don’t want to pay such a high price for it, despite needing it.

The global currency system is running into a supply issue as value increase, while the U.S. slowly loses share of the global GDP.

The inherent nature of a global reserve currency, and its underlying economy, makes it temporary albeit potentially long lasting.