You’re standing in the back yard, filling up a wading pool for the kids with a garden hose. If you turn the hose off, the pool stops filling. Allow enough time, and the sun evaporates the water. Over the course of the summer, the water slowly dries up, leaving you with an empty pool and unhappy children – unless you turn the hose back on.

Starting in late February, governors across the U.S. turned off (or severely restricted) their economies to try and mitigate the spread of COVID-19.

They first felt the consequences in March, and the negative ripple effects are likely to continue well into 2021. The virus is still circulating at high levels despite 10 months of lockdowns and travel restrictions (some of which are still in place).

As we enter 2021, the deeper economic impacts are starting to become increasingly apparent. Even the more optimistic economic forecasts don’t look that great.

When the bar for economic improvement is just “do better than 2020,” it isn’t hard to beat expectations. “We see really strong growth potentially starting in the second quarter,” says Barclays economist Jonathan Millar. “It’s a pretty strong year.”

That optimism seems misplaced once you factor in the rest of this outlook:

That doesn’t mean the economy will be back to normal. The pandemic is leaving a legacy of millions of jobless Americans and thousands of shuttered businesses that will take years to reverse.

According to Federal Reserve Chairman Jerome Powell, we’re lucky because 2021’s predicted unemployment rate fell from 5.5% to a mere 5%. That’s not much better than the current unemployment rate of 6.7%, and considerably worse than the pre-pandemic 3.8% unemployed in January 2020.

While that’s good news, it won’t offer much comfort to the millions of people who have already been out of work for much of 2020.

Plus, some of those people didn’t get paid some (or any) of their benefits for a variety of reasons, including states that were overwhelmed with unemployment applications. People with only a little money don’t spend that money on anything other than necessities. And that means less spending overall, and spending is the engine that drives the U.S. economy.

Lower spending indicates economic uncertainty, a sure sign of an unhealthy economy. You can already see how year-over-year U.S. GDP has suffered in the official chart below (see the purple column): 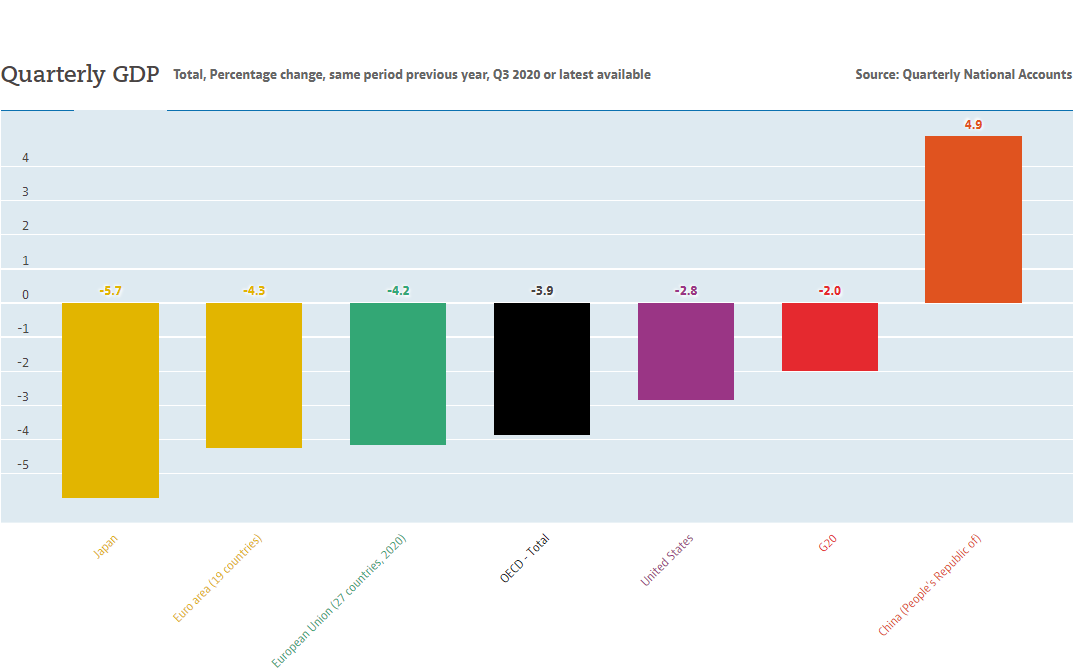 Interesting that China, where this virus seems to have originated, appears to be doing well economically, growing by almost five percent (on the other hand, Beijing is notorious for cooking its books). Other countries, including the U.S., are clearly suffering.

That trend looks to continue into 2021, according to Deloitte Insights: “The damage to the economy, from shutdowns and withheld aid, has already been done. The coming months will show the extent—and suggest the direction of the recovery.”

It also looks as though the Fed will keep doing more of the “same old, same old” to try to keep the U.S. economy afloat.

At their most recent FOMC meeting, the Fed also decided to keep rates between 0% and 0.25%. Aside from coming dangerously close to negative rates, this loose monetary policy punishes savers and will certainly bring its own set of consequences next year.

According to the CNBC graph below, the rates look about the same as the last financial crisis in 2008, but the Fed’s balance sheet (among other countries) is set to soar: 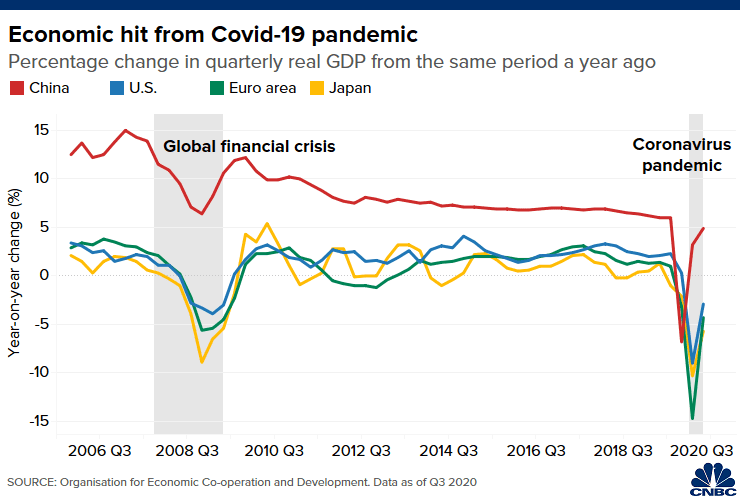 At some point in the future, the Federal Reserve will have to start unwinding their balance sheet. That didn’t work out so well the last time.

But any way you look at this, it sure seems like low rates, unemployment, and historically loose monetary policy will be with us for some time. Remember the phrase “The New Normal” from the Great Recession? Seems like we’re experiencing a new new normal that looks something like this:

As the economy sputters its way into 2021, we’re all on the train together. Biden’s in the cab, Janet Yellen’s shoveling paper money into the firebox. Americans cough and wheeze in the thick clouds of smoke, peering ahead, trying to figure out where we’re headed. The infamous bandit “Inflation” moves car to car, robbing those who still have money. Where are we going? When will we get there? No one knows. And even though we all have a ticket, no one wants to be on this ride…

Best to find ways to buckle up before it’s too late.

No matter how you look at it, the economic crisis that began in 2020 looks to continue into 2021.

An economic disaster doesn’t have to wreck your retirement plans like so many during the Great Recession. You can take action now to protect your savings.

It could be a good time to add physical assets like gold or silver. They can crisis proof the value of your retirement, and have been used worldwide to preserve savings for thousands of years. And despite his kleptomaniacal reputation, the infamous bandit “Inflation” won’t touch them.