by Pamela Williams
I have been searching through WIKILEAKS for information on the Clinton’s dealings with Russia; not only the Clintons, but, also Lobbyist Tony Podesta. It turns out there is a huge scandal with Russia…it is just not the one that has been publicized about President Trump. President Trump was wiretapped, but nothing was found. He shared no illegal communications with Russia.
On the other hand we have some big scandals between Russia, the Clintons, Tony Podesta, and the Democrats. Trump is right! This must be investigated now! But instead of putting the blame where it lies Congress is busy harassing AG Jeff Sessions. Trump aides had conversations with the Russian ambassador, or Russian officials. Trump Attorney General Jeff Sessions was a U.S. Senator at the time. That’s part of his job. They cannot seem to get into their heads that Sessions used to be a Senator!
The true scandals are below:
1. Washington Lobbyist Tony Podesta, Brother Of Clinton Campaign Manager John Podesta:
Tony Podesta, brother of Hillary’s national presidential campaign manager John Podesta is a super lobbyist who took huge money from the Russians in order to end U.S. government sanctions against Sberbank, Russia’s largest bank. Not only did the brother of Hillary’s campaign manager take huge money from the Russians to represent a foreign government’s biggest bank, but his firm accepted over $24 million in fees in 2016, much of it from foreign governments.
2. Democrats lied about meetings with Russian Ambassador. Democrat U.S. Senators had the same meetings. So did House Minority leader Nancy Pelosi. They all met with the same Russian Ambassador.
3. Hillary’s State Department approved giving one fifth of the U.S. uranium stock to Russia, at the same time top executives of the uranium company gave Hillary $500,000 for one speech and “donated” $145 million to her foundation. This treason! If phone calls to Russians merit an investigation, what is the significance of the Clinton Foundation accepting $145 million from the Russians, while Hillary is Secretary of State and being lobbied by these same people to sell off America’s valuable resources? Or Hillary’s campaign manager’s brother lobbying on behalf of Russia’s biggest bank while his brother runs her campaign for President?
I archived a page which shows exactly how the money from Russia went into the Clinton Foundation.
archive.is/1arDL

It is from the New York Times and starts out:

Donations to the Clinton Foundation, and a Russian Uranium Takeover

By WILSON ANDREWS APRIL 22, 2015
Uranium investors’ efforts to buy mining assets in Kazakhstan and the United States led to a takeover bid by a Russian state-owned energy company. The investors gave millions to the Clinton Foundation over the same period, while Secretary of State Hillary Rodham Clinton’s office was involved with approving the Russian bid. RELATED ARTICLE

Russians control of one-fifth of all uranium production capacity in the United States. Since uranium is considered a strategic asset, with implications for national security, the deal had to be approved by a committee composed of representatives from a number of United States government agencies. Among the agencies that eventually signed off was the State Department, then headed by Mr. Clinton’s wife, Hillary Rodham Clinton.
As the Russians gradually assumed control of Uranium One in three separate transactions from 2009 to 2013, Canadian records show, a flow of cash made its way to the Clinton Foundation. Uranium One’s chairman used his family foundation to make four donations totaling $2.35 million. Those contributions were not publicly disclosed by the Clintons, despite an agreement Mrs. Clinton had struck with the Obama White House to publicly identify all donors. Other people with ties to the company made donations as well.
And shortly after the Russians announced their intention to acquire a majority stake in Uranium One, Mr. Clinton received $500,000 for a Moscow speech from a Russian investment bank with links to the Kremlin that was promoting Uranium One stock.

Now that we see the Real Russian Scandal and who got rich off of it, it makes one wonder how these Liberal Democrats have gotten away with all of this. President Trump must go after these people now that he is President. The Clintons actually sold US land rich with uranium to Russia. Russia actually own US LAND!

Below is a picture of where that land is located. A Uranium One sign that points to a 35,000-acre ranch owned by John Christensen, near the town of Gillette, Wyo. Uranium One has the mining rights to Mr. Christensen’s property. 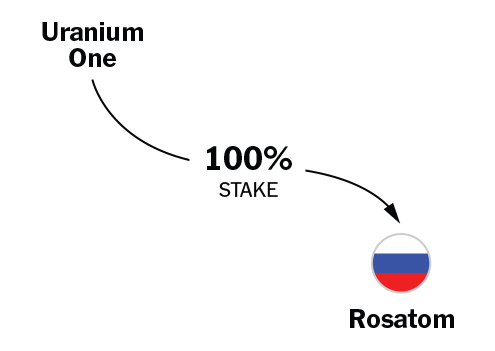 The Russian atomic energy agency is called Rosatom Rosatom had taken over a Canadian company with uranium-mining stakes stretching from Central Asia to the American West. The deal made Rosatom one of the world’s largest uranium producers and brought Mr. Putin closer to his goal of controlling much of the global uranium supply chain. Putin actually does control a large part of global uranium supply, and this is much because of the help from the Clintons. So I guess you could say Russia made the Clintons rich while they acquired more uranium from the US…basically from the American people. I don’t know about you, but I am tired of getting ripped off by these criminal globalists!
Rosatom seeks majority ownership of Uranium One, pending approval by the Committee on Foreign Investment in the United States, of which the State Department is a member.
Source:
archive.is/1arDL#selection-2179.0-2179.154

Here is the archive on the land picture –
archive.is/IUQPV

5 thoughts on “There IS A REAL RUSSIAN SCANDAL, And President Trump Is Calling For An Investigation!”