Businesses linked to members of Congress received millions in Paycheck Protection Program (PPP) loans, according to CREW’s analysis of new data released by the Small Business Administration. Many of the lawmakers who benefited from PPP loans opposed legislation to make the program more transparent.

Among the PPP beneficiaries was Rep. Vern Buchanan (R-FL), one of the top ten wealthiest members of Congress as of 2018. His car dealerships in Florida and North Carolina–Sarasota 500 and Nissan of Elizabeth City–received between $2 and 6 million in PPP loans. Buchanan has reported interests in the Florida and North Carolina dealerships, which he valued at exceeding $50 million and between $1 and $5 million, respectively.

Another one of Congress’s wealthiest members, Rep. Roger Williams (R-TX), benefitted from a PPP loan valued between $1 and 2 million for his car dealership in Texas. Williams is the Sole Director and President of the company that received the loan, JRW Corporation, which is valued at $50 million, according to his latest financial disclosure. Williams previously acknowledged receiving a PPP loan, but declined to specify the amount.

See also  Trump Admin. COVID-19 Advisor: There was never a chance this vaccine was going to work (Video)

The Florida Democratic Party is returning $780,000 it received through the federal Paycheck Protection Program after enduring criticism from state Democrats and Republicans alike for taking the small business loans.

In a statement, Florida Democratic Party spokesperson Luisana Pérez Fernández said Congress passed the PPP “to support employers and their efforts to provide funds to keep people working — and like many employers during the shutdown, FDP was concerned about meeting payroll and keeping our staff employed, so we applied. The bank, the loan processor and agents of the Small Business Association approved the funding.”

But Pérez Fernández added that the SBA “made a mistake in approving the funding, so we are volunteering to return it.”

According to Politico, the party applied for the loan in March, right after Congress passed the $670 billion PPP initiative, “even though there was discussion at the time that the money should go to neither lobbyists nor political causes.”

More than a year after the pandemic brought much of the economy to a standstill, mounting fraud cases underscore how the Small Business Administration’s (SBA) oversight of its massive taxpayer-backed lending programs proved to be inadequate as they became magnets for fraudsters.

The Justice Department has brought criminal charges against at least 209 individuals in 119 cases related to Paycheck Protection Program (PPP) fraud since banks and other lenders began processing loan applications on behalf of the Small Business Administration on April 3, 2020. And these cases are just the beginning. 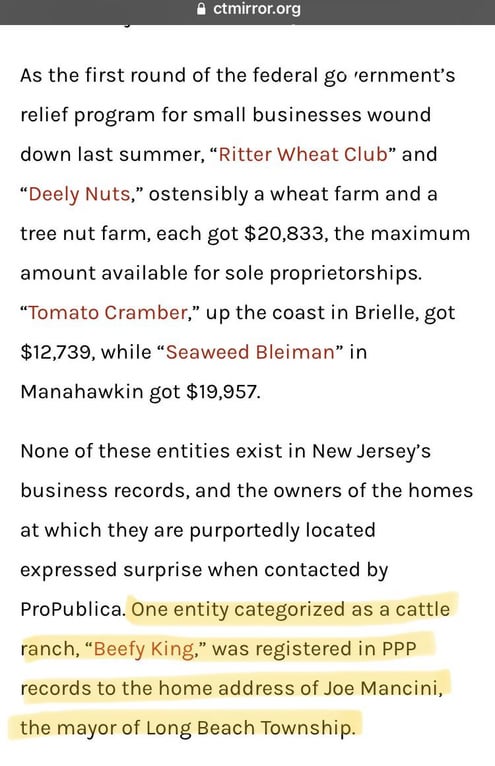