Nordstrom’s shares popped 12% this morning after it reported better-than-expected results. Where did the sales gains come from: e-commerce sales. Sales from Nordstrom.com soared 50% year-over year to $897 million. Including its other e-commerce sites, total online sales jumped 23% to $1.35 billion, or to 34% of its total sales.

During the first day of Nordstrom’s anniversary sale in July, it “achieved record digital demand, surpassing its previous peak by 80 percent,” it announced proudly.

Nordstrom’s total sales in the quarter grew by $263 million from a year earlier, to $4.07 billion.

Of that sales gain, $250 million came from e-commerce and $21 million came from credit card interest revenue (your Nordstrom card is a profit center). Both combined produced revenue growth of $271 million. But total sales only grew by $263 million, meaning that sales at its brick-and-mortar stores fell by $8 million.

Not many retailers give investors this detailed look into their online sales v. brick-and-mortar sales. Most just mention percentages. But all brick-and-mortar retailers that want to stick around have to create a vibrant successful online presence – that’s where the growth is, as sales at their brick-and-mortar stores are heading into hard times.

Walmart has been investing billions of dollars, including for acquisitions, to build its online businesses, in an all-out existential battle with Amazon. It announced yesterday that its online sales jumped 40% in the quarter year-over-year, and that it expects online sales for the entire year to grow 40%.

Best Buy, Macy’s and other brick-and-mortar chains are also succeeding with herculean efforts to grow their online businesses. But those that did not succeed online, such as most recently Toys “R” Us, Bon-Ton Stores, Sears, or J.C. Penney’s are being liquidated or will be liquidated.

People who still say that the threat from e-commerce is “overblown” because it makes up less than 10% of total retail sales refuse to see the structure of the brick-and-mortar retail industry.

There are retail segments that are for now largely “online resistant.” Most prominently, this includes gasoline stations, new- and used-vehicle dealers, and grocery and beverage stores. Online sales have made little progress into this arena for now. Combined, the three sectors make up 52% of brick-and-mortar retail sales.

This morning, the Commerce Department released the e-commerce data for the second quarter, and it confirms the biggest fears – as well as the Nordstrom scenario.

E-commerce includes sales by the online operations of brick-and-mortar retailers, such as Nordstrom, Walmart, and Best Buy, along with the sales of online-focused retailers, from Amazon down to the innumerable small operations. Over the past five years, e-commerce sales have nearly doubled.

Total retail sales in Q2 – including e-commerce but excluding sales at restaurants and bars – increased 5.7% year-over-year to $1.33 trillion (seasonally adjusted).

Sales at the “online resistant” bunch – at gas stations, auto dealers, and grocery and beverage stores, which account for 52% of all brick-and-mortar sales – rose 6.2% in Q2 to $621.5 billion.

Sales at the “under-attack” bunch – the remaining brick-and-mortar sectors – rose only 3.3% in Q2, not even keeping up with the combination of  inflation and population growth (CPI rose 2.9%, population rose 0.8%), even as e-commerce sales surged 15.2%. This chart shows how e-commerce is eating into the share of the brick-and-mortar retailers that are under attack: 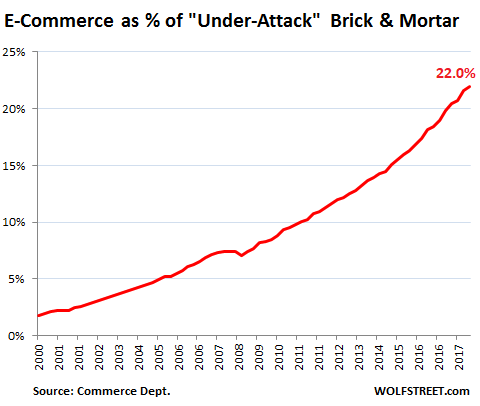 But even that chart averages out the long-drawn-out meltdown in specific sectors. Some brick-and-mortar sectors have already been largely wiped out, such as music stores and video stores. Others have been decimated by e-commerce, such as book stores (Borders is history, Barnes & Noble is struggling) and toy stores, including Toys “R” Us now being liquidated.

Department store sales peaked in 2001 and have since plunged 36%, despite inflation and population growth. The most iconic names in the sector have been shuttering stores and laying off people. Other department store chains, including Bon-Ton Stores, have been liquidated. Sears is going to get liquidated, it’s just a matter of when. J.C. Penney is looking very dreary.

The chart of e-commerce sales (red line) versus some of the other major categories of stores shows why the threat of e-commerce to brick-and-mortar retailers is not “overblown”: 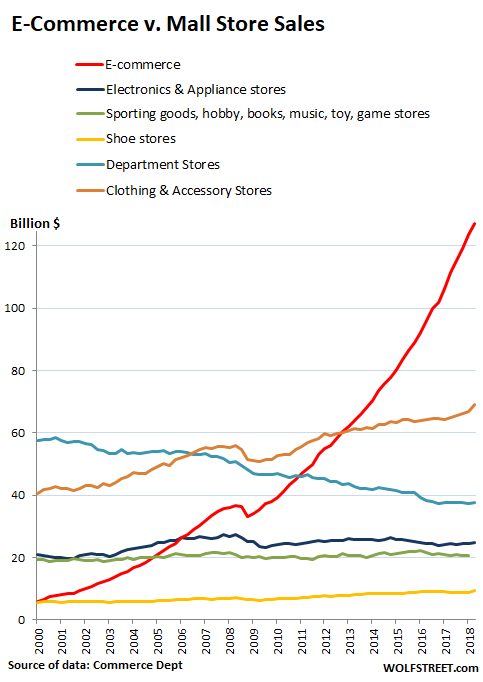 These under-attack brick-and-mortar retailers that are losing the battle against e-commerce are precisely the stores that populate shopping malls, with department stores – the most beaten-up segment – serving as the anchors. This problem for mall landlords, despite feverish landlord rhetoric to the contrary, is just going to get worse.

Consumers will continue to shift their purchases online. Entire brick-and-mortar sectors will essentially disappear – like music stores and video stores before them. But it took 20 years for online sales to get this far. And it’s going to take many more years to complete the structural transition. The environment for brick-and-mortar retailers and malls will get relentlessly tougher, where each liquidation creates some fake breathing room for the remaining brick-and-mortar competitors, but only briefly. Then the process continues.