Psychological Operations (Psyop) are planned operations to convey selected information and indicators to audiences to influence their emotions, motives, and objective reasoning, and ultimately the behavior of governments, organizations, groups, and individuals. In other words, it is the government or other powerful groups creating and spreading specific narratives. The purpose of a Psyop is to induce or reinforce behavior favorable to US government objectives.

So, which current political movement is most beneficial to the US government? Although there could be multiple movements simultaneously benefiting the status quo, I would say The Resistance takes the cake.

They absolutely despise the enemies of the US elites. For example, look at Russia. Most of The Resistance despises Russia because they think Putin helped get Trump (their sworn enemy) elected. Conveniently, Russia is also one of the main enemies of the US’s ruling-class. Russia has been going after their source of power (the US dollar) since before Trump was elected. The US and Russia are also involved in two proxy wars (Syria & Ukraine) against each other. If the US ruling-class cannot maintain their economic and geographical advantage in the world, they lose much more than the working- and middle-class Resistance. So, is The Resistance being primed to consent to harsher treatment of Russia? It sure seems like it.

The Resistance has also come to adore the individuals that comprise the status quo. Hillary, McCain, Mueller, Brennan, and even George W. Bush. Five or 10 years ago, most liberals would have despised these establishment Warhawks. These people never saw a poor Arab country they didn’t want to destroy for profit. They never missed an opportunity to erode your freedoms or to make government more oppressive. Now they are heroes of The Resistance.

Look at how they fawn over intelligence community personnel, the same intel community that has lied us into wars and tortured people.  Just this week, after Peter Strzok was fired from the FBI, The Resistance went on GoFundMe to help “support” (whatever that means) a guy who is almost guaranteed a cushy corporate job. 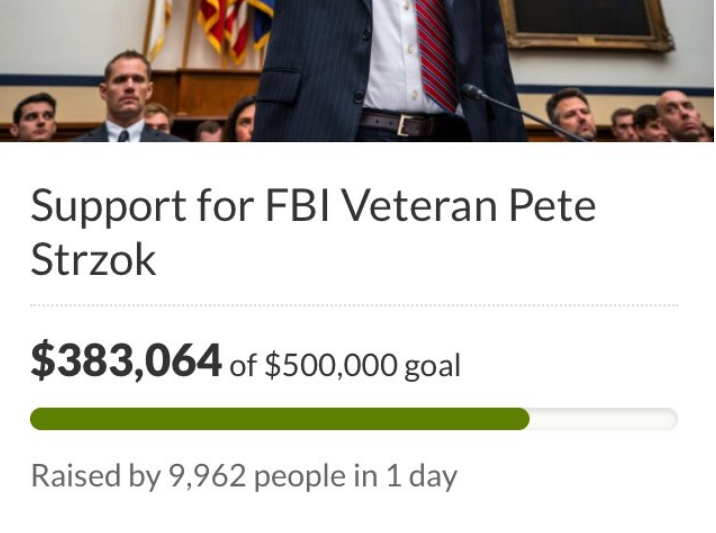 The Resistance is also very supportive of legislation and policy that furthers the ruling-class’ interests. In their minds, it would have proved Trump’s collusion with Russia if Trump didn’t impose sanctions on Russia. It would have also proved collusion if Trump didn’t bomb Syria (a Russian ally). It never enters their mind that the ruling-class is interested in building a natural gas pipeline through Syria, and the Assad regime is against it. The Resistance is nowhere to be found, however, when Pelosi and other Congress Democrats vote to keep warrantless surveillance in the hands of Trump. Or when McCain and others in the Senate voted to keep war declaration powers in the hands of Trump. The Resistance is perfectly aligned with the wishes of the ruling-class. How very odd.

It’s ironic, isn’t it? The Resistance is resisting everything that goes against the status quo. All because they can’t see through their hatred for Trump. They aren’t for positive change; they are for hatred. It is the perfect Psychological Operation. And although I dislike the intel community, war profiteers, powerful special interest groups and other members of the rent-seeking elite, I must give them credit for a job well done.