The coronavirus disrupted the global economy in more ways than we can count. With multiple European countries reimposing strict lockdowns in light of a predicted second wave of the virus, international trade is primed for another unstable period. With that being said, here are the top exports for every country in the world. 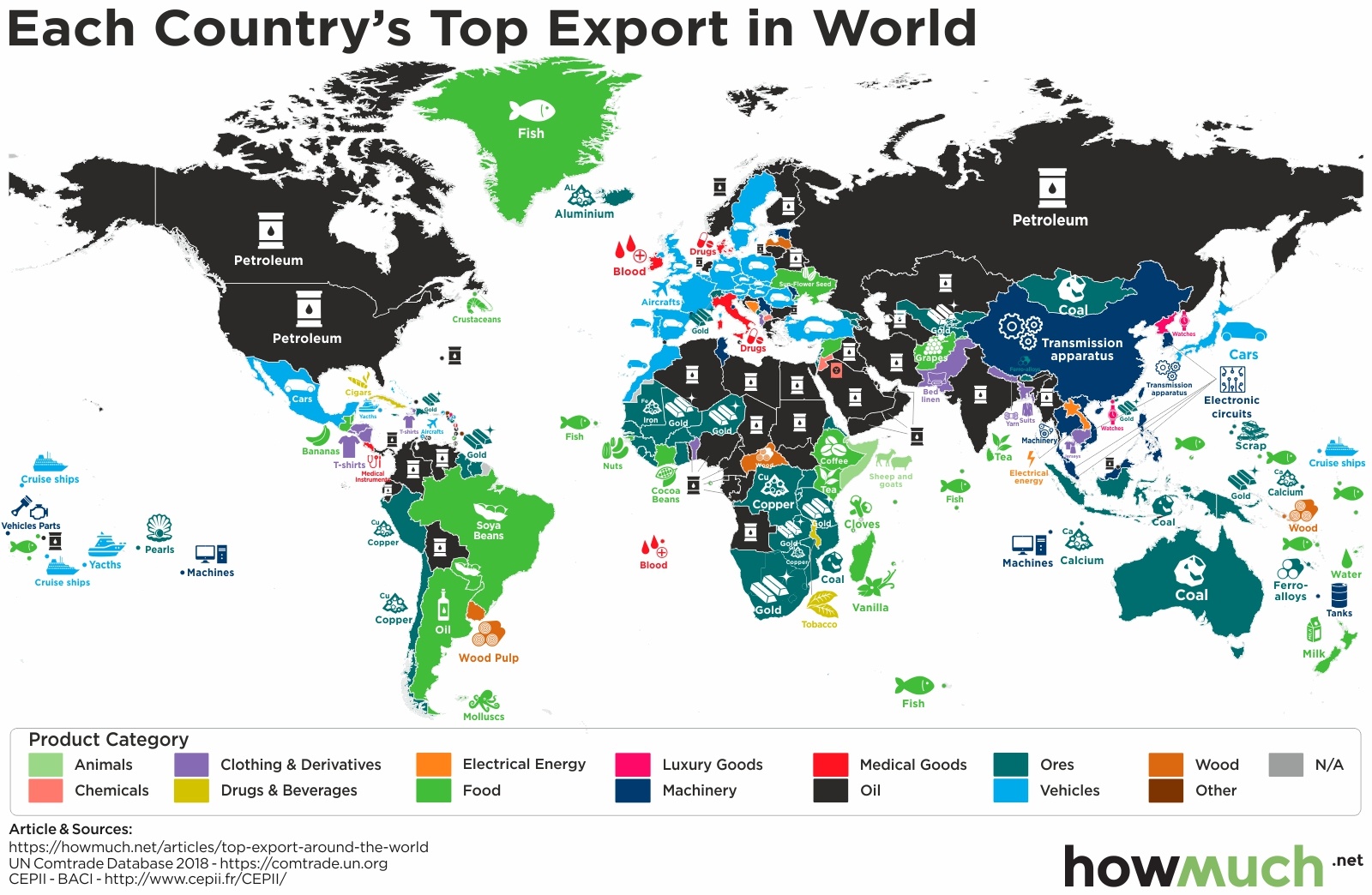 We found the data for our maps at CEPII, a leading French center for economic research and analysis. We located each country’s top export and classified its industry designation according to the UN Comtrade Database. We then applied a simple color-coding schema to create a snapshot of the world’s top export industries as of 2018, the latest year for which data were available.. 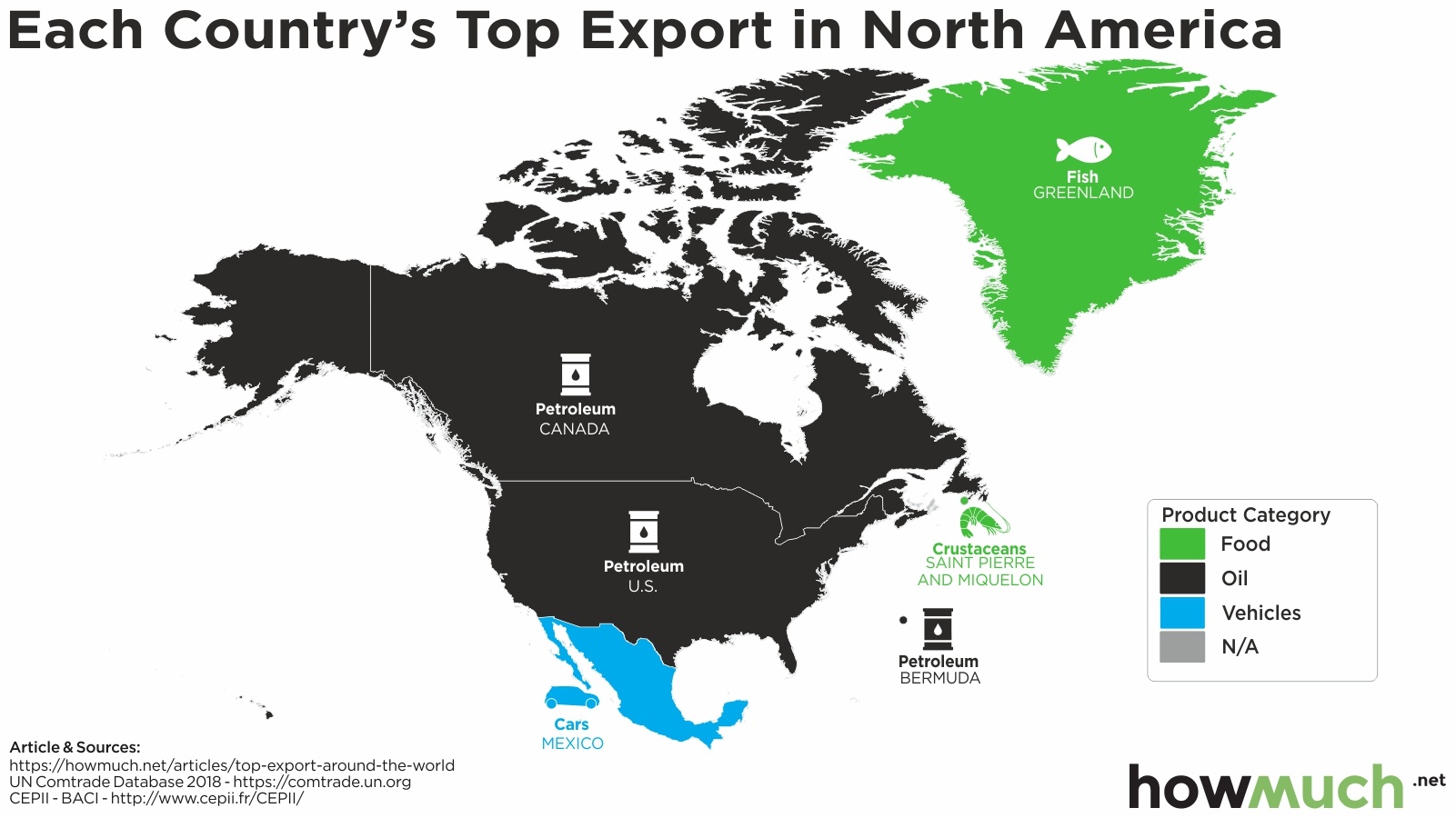 The petroleum industry looms large in exports for North America. According to the US Energy Administration, the US is both the single largest producer and the largest consumer of oil. Thanks to a boom in hydraulic fracking, the US dramatically slowed its importation of oil and now exports millions of barrels each year around the world ($95.8). That’s one reason why, when the coronavirus forced the Western world into a lockdown this spring, oil prices plummeted into negative territory. Mexico meanwhile remains a source of manufacturing vehicles primarily to be sold in US markets ($50.7B).

READ  Goldman Sachs: 'we're in a Roaring '20's redux'... Every Fed Gov: we don't see any bubbles and we need another year of QE at least 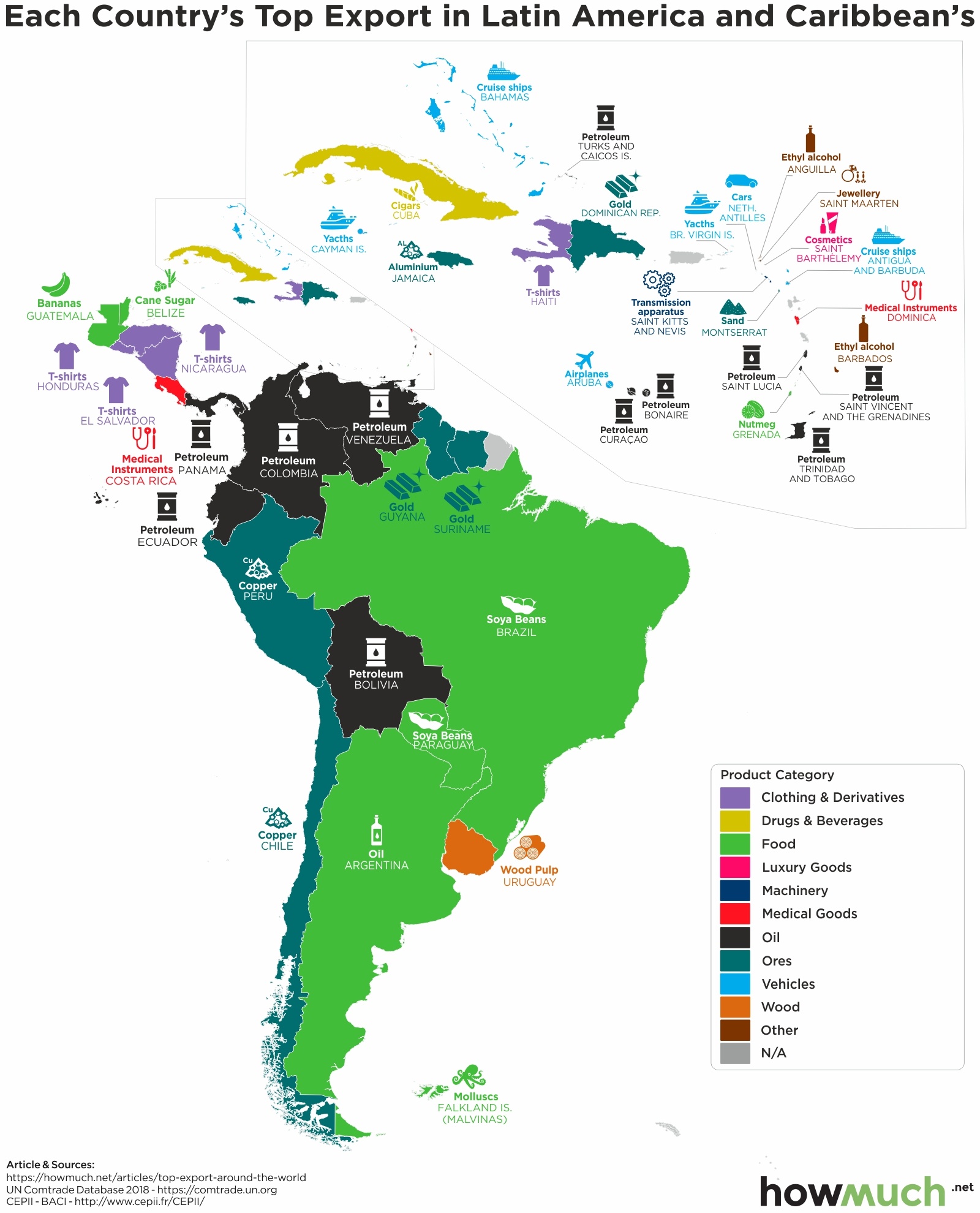 Exports look very different in South and Central America. There is a cluster of countries in Nicaragua, El Salvador and Guatemala that exports t-shirts around the world. Further to the south, countries increasingly rely on natural resources and agricultural products. Venezuela sent $23.2B of oil to foreign markets in 2018, while Brazil provided $33.2B of grains. And there are also a few obvious exports from Caribbean countries, including cigars from Cuba, yachts from the Cayman Islands and nutmeg from Grenada. 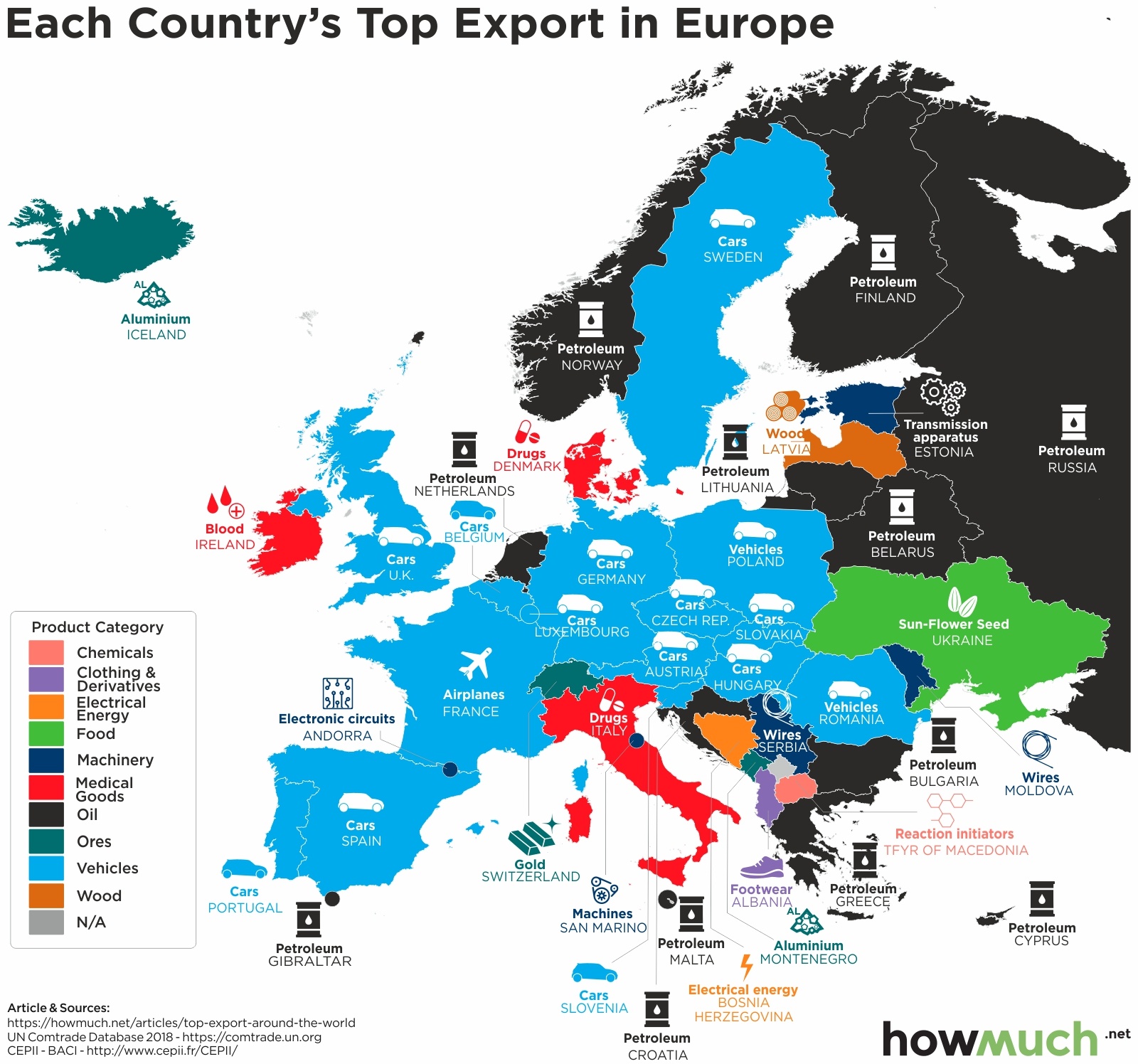 Our snapshot of top exports from Europe highlights an important aspect of how developed economies work. For the most part, European countries export finished manufactured products, like automobiles, airplanes and pharmaceuticals. The continent’s leading economic power, Germany, sells about $155.7B of vehicles to the rest of the world every year. France, home to Airbus, sends abroad $43.8B in airplanes every year. Even the UK, which isn’t known for its auto manufacturing sector, exports $43.4B of vehicles. 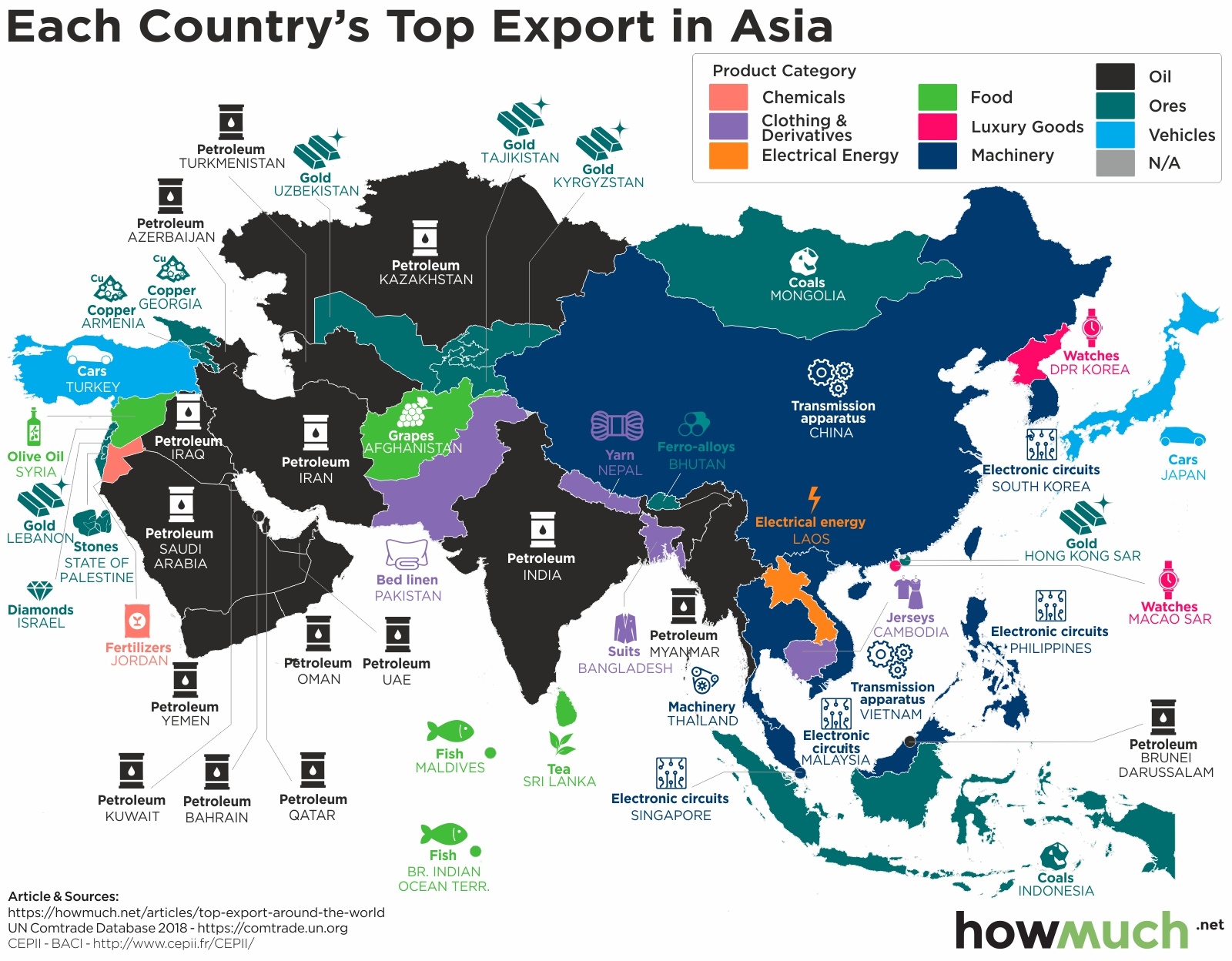 Our map of Asia stretches from Turkey to Japan, and there are therefore a few different stories to tell. For starters, Asia exports a lot of finished products to the rest of the world similar to Europe, but the types of manufactured goods and underlying industries are different. China alone sends over $223B of electrical machinery around the world on an annual basis. Saudi Arabia’s oil industry is predictably off the charts, topping $164.8B each year, or about $30B more than Russia. Perhaps most surprisingly, petroleum is the top export for both India ($41.5B) and Myanmar ($5.6B). Clearly there’s a lot of economic diversity across such a large continent.

READ  Published in USA Today on november 2nd, the last day you could raise these questions without being called a conspiracy theorist: 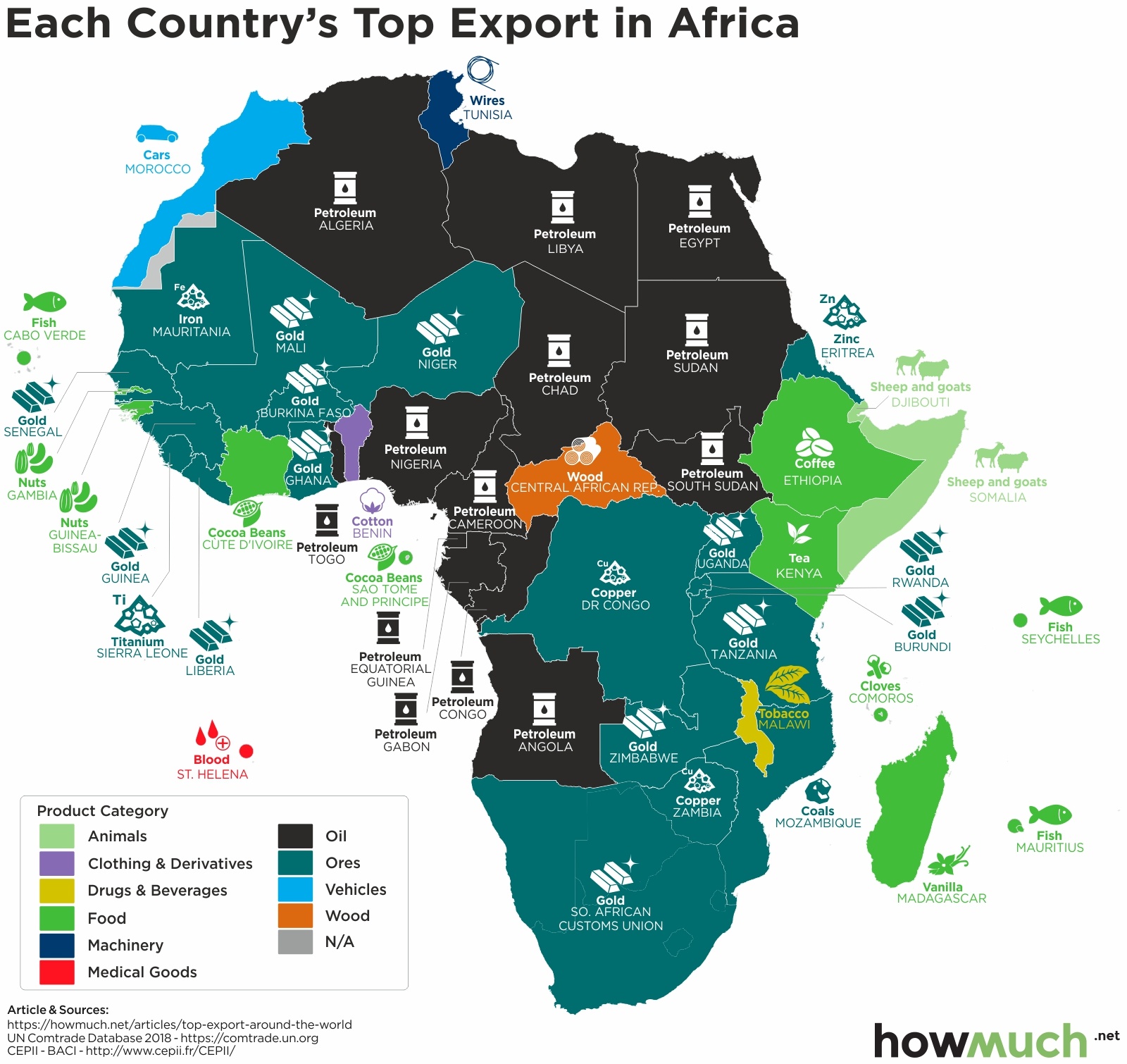 The single biggest takeaway from our export map of Africa is how the continent relies almost entirely on raw materials for its top exports. There isn’t a single country specializing in high-end industries like medicine, with the exception of St. Helena, which is a tiny island nation. Morocco is the only country supplying finished products as its top export (automotives) to the world. The rest of the continent is focused in heavy industries and raw materials like petroleum, gold and copper exports. 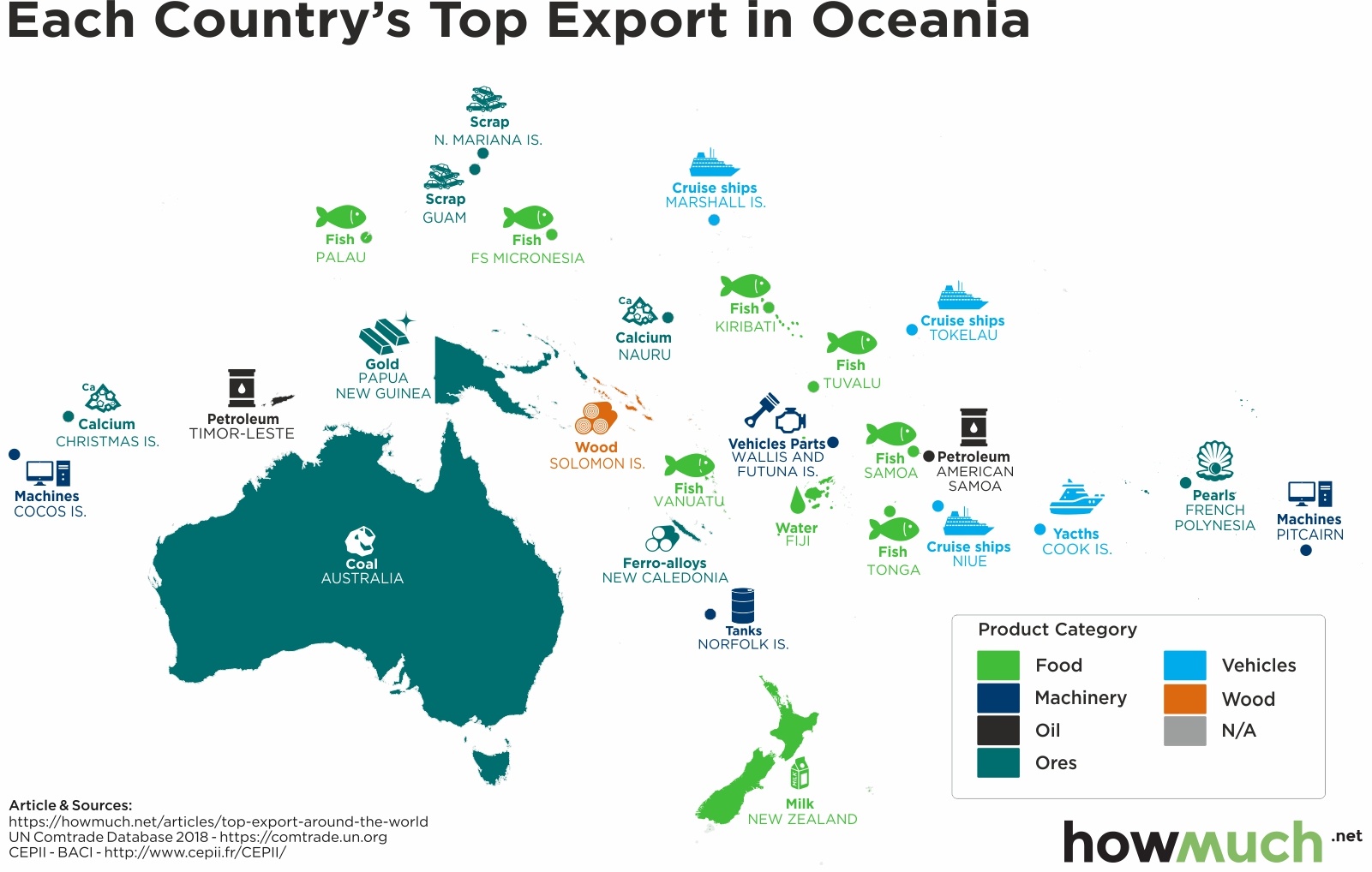 The top exports from countries in Oceania don’t come with any surprises. Island nations specialize primarily in fishing industries and the manufacturing of yachts and cruise ships. Australia’s single biggest export is coal ($57.2B), making it the second largest minerals exporter in the world behind Switzerland ($63.8B).

The coronavirus pandemic is scrambling the world’s supply chains and rewriting the norms of international trade. How do you think the pandemic will impact the world’s top exports like petroleum? Let us know in the comments.