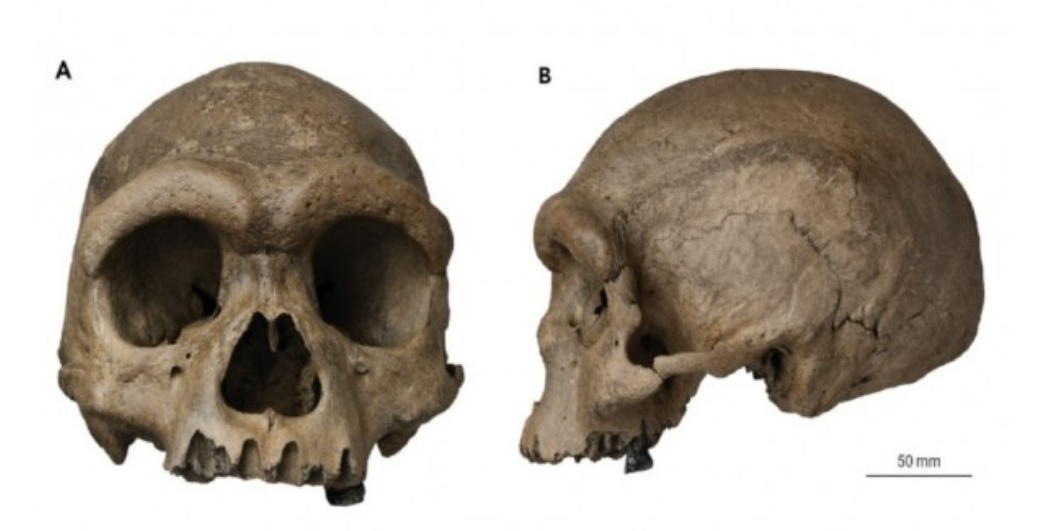 Truth is often stranger than fiction, and some people will never accept the truth no matter how much evidence you show them.  In this article, I am going to discuss two brand new discoveries that are radically shaking up how scientists view human history.  Many of the experts are having a really tough time explaining these new discoveries, because they seem to directly contradict long established narratives that have been taught as “truth” to young students for decades.  Unfortunately, we live at a time when narratives have become more important than facts, and scientific authorities have shown that they will go to great lengths to ensure that their most important narratives are carefully preserved.

Last week, news that a “new species of ancient human” had been identified in China made headlines all over the globe.  According to CBS News, the fossilized skull that has created such a fuss is “gigantic”…

A gigantic fossilized skull that was hidden in a well in China for 90 years has just been discovered by scientists — and it’s making them rethink human evolution.

The skull was originally found in 1933 by Chinese laborers building a bridge in Harbin, a northern Chinese city, during the Japanese occupation, researchers said. To prevent the skull from falling into Japanese hands, it was wrapped and hidden in an abandoned well. It was only rediscovered in 2018 when the old man who originally hid it told his grandson, shortly before his death.

In order to support a “gigantic fossilized skull”, a body that is also “gigantic” in size would be required.

In other words, what has been discovered in China is the skull of a giant, but nobody in the scientific community would ever dare to use that sort of terminology.

After all, certain narratives must be maintained at all costs.

But the skull is what it is.  We are being told that it is “massive” and that it is “significantly larger than the modern human skull”…

One of the most remarkable aspects of the Harbin cranium is its massive size, which, at 9 inches long and more than 6 inches wide, is significantly larger than the modern human skull.

Unfortunately, most news outlets in the United States are carefully avoiding any discussion about what the rest of the body of this creature must have looked like everyone though one paleoanthropologist is openly admitting that “the massive head should match a height higher than the average of modern humans”…

The researchers believe the skull belonged to a male, about 50 years old, who would have been an impressive physical specimen. His wide, bulbous nose allowed him to breathe huge volumes of air, indicating a high-energy lifestyle, while sheer size would have helped him withstand the brutally cold winters in the region. “Homo longi is heavily built, very robust,” said Prof Xijun Ni, a paleoanthropologist at Hebei. “It is hard to estimate the height, but the massive head should match a height higher than the average of modern humans.”

It only makes sense that a “gigantic” head should go with an equally “gigantic” body, but the scientific community will never, ever come out and tell us that evidence of “giants” has been found.

See also  Wasting Away In Bidenville! Dow Tanks -500 Points On Friday As Fed Reaffirms Their Fight On Bidenflation

Instead, they will just keep adjusting their established narratives to try to fit with the new evidence.  In this case, Chinese scientists are trying to claim that this is a “new species” of humans that has never been discovered before…

In three papers in the year-old journal The Innovation, paleontologist Qiang Ji of Hebei GEO University and his team call the new species Homo longi. (Long means dragon in Mandarin.) They also claim the new species belongs to the sister group of H. sapiens, and thus, an even closer relative of humans than Neanderthals.

A number of anatomical features tantalizingly suggest Dragon Man may be a Denisovan, such as extremely large molars and the lack of a third molar, Stringer said. “I think I’d stick my neck out and propose that [the skull] is Denisovan until otherwise proven,” Dennell said. Paleoanthropologist Matthew Tocheri at Lakehead University in Canada, who did not participate in this study, agreed, saying, “If it walks like a Denisovan and talks like a Denisovan…”

And that may actually be the case, because the Denisovans were giants as well.

Nesher Ramla Homo — named after the place southeast of Tel Aviv where it was found — may have lived alongside our species, Homo sapiens, for more than 100,000 years, and may have even interbred, according to the findings.

The early humans, who had very large teeth and no chin, may have also been ancestors of the Neanderthals, the study added, challenging the current thinking that our evolutionary cousins originated in Europe.

Needless to say, we already know that giants once lived in that part of the world.

See also  VIDEO: Children in China are still forced to eat with their masks on in school

In fact, one particularly famous giant that lived in the region was named “Goliath”.

But scientists will never admit the truth, because they have trained us to regard those stories as “myths”.

So they will never, ever make any connection between the discoveries that they are making and Genesis chapter 6…

And it came to pass, when men began to multiply on the face of the earth, and daughters were born unto them,

2 That the sons of God saw the daughters of men that they were fair; and they took them wives of all which they chose.

3 And the Lord said, My spirit shall not always strive with man, for that he also is flesh: yet his days shall be an hundred and twenty years.

4 There were giants in the earth in those days; and also after that, when the sons of God came in unto the daughters of men, and they bare children to them, the same became mighty men which were of old, men of renown.

5 And God saw that the wickedness of man was great in the earth, and that every imagination of the thoughts of his heart was only evil continually.

If we refuse to accept the truth about our past, that will make it far more difficult to understand our future.

Anyone that is intellectually honest should be willing to follow the evidence wherever it leads.

Unfortunately, free thinking has been brutally repressed in academic circles today, and serious deviations from established narratives are simply not tolerated.