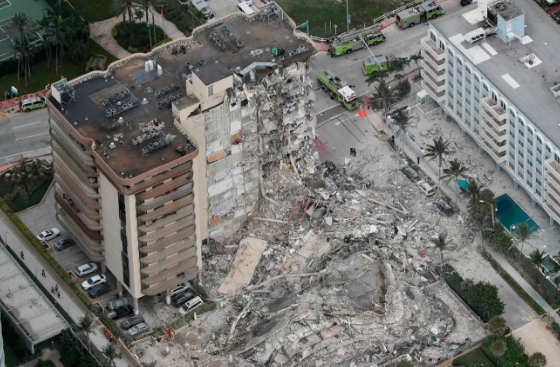 This is symbolic for the things to come … first slowly, then all of a sudden.

Are you familiar with the saying: you import the 3rd world, you become the 3rd world? Also known as “demographics are destiny”?

Well, Miami is becoming a 3rd world shithole, and just like many places in California et al. it doesn’t resemble America anymore. Here’s what happened last night in Miami:

JUST IN: Video I’ve obtained of the building collapse in Surfside, Florida. pic.twitter.com/BGbRC7iSI9

It’s crazy how news stories that used to be limited to the poorest parts of Africa, India, and Central America now happen nearly every week in the USA.

At least one person was killed in the collapse of a high rise condominium near Miami Beach. Dozens more are injured and more than fifty are unaccounted for.

The collapsed building is located in Surfside, a town in Florida’s Miami-Dade County.

What is the 3rd world thing in the title, you asked? In America, just like in 3rd world countries, buildings randomly fall down for no apparent reason.

How many buildings and bridges and other major structures regularly fall over is a pretty good measure of how well your civilization is doing.

From where I’m sitting, American civilization is really not doing all that well.

Well, that’s an easy one: third world people who are replacing white Europeans courtesy of “democracy” and “these are our values bigot” bring with them 3rd world ideas.

Why is the 3rd world a shitty place? Because shitty people with shitty ideas live there, doh. There’s no magic dirt in America, it’s the quality of the people who founded it.

So, welcome to the third world, Miami.

Did the construction company have any Chinese contractors?

Here’s my theory: when the collapsed building was being and built designed (circa 1981), there was a huge push for diversity in the architectural and engineering teams. Many older experienced men were let go or passed over to create a more diverse workforce.

A few remaining “non-diverse” engineers warned upper management numerous times that the architectural and engineering plans created by the new diverse teams were amateurish and not sound designs and in many instances very dangerous.

These “whistle blowers” were scolded and send to extended diversity and inclusion training to re-educate them.

It’s going to be an interesting decade of decline, theft and death.

See also  China, Hedge Funds gobbling up America. Congress to intervene
See also  America Is Only One Step Away From A South African-Style Social Implosion
2,314 views