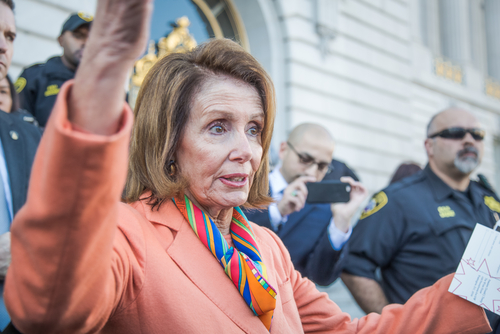 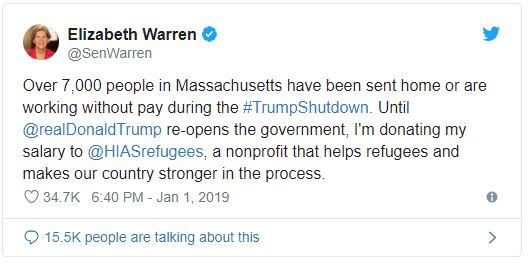 Believe it or not, member of Congress continue to get paid even when there is a shutdown on the basis that Congress refuses to fund the government. Elizabeth Warren has come out and stated that she will donate her salary during the shutdown. The Speaker of the House, Nancy Pelosi, is paid $223,500 per year. The Democrats fought to include a new top bracket raising it from $250,000 to $500,000 to reach 37% tax rate. It was embarrassing when you are earning close to $250,000 and you keep demonetizing the rich.

Of course, Congress is excluded from Obamacare. They get their own golden deals of unlimited care. That is worth more than $50,000 annually which they do not include in a salary.

So any wonder why the member of Congress can let a shutdown go on and on? Easy, they still get paid when everyone else does not. Nancy Pelosi reiterated that Democrats will not agree to a border wall but joked that she’d give Trump $1 for it.

They believe they can make Trump look like the bad guy here and the shutdown can be a long one indeed. They have dug in their heels and it is hard to see how they can back down now without losing face. The fact that the wall would be $5.7 billion and one week’s interest bill to keep rolling the debt comes in at $6.7 billion. This is simply a political standoff demonstrating that Congress has lost all civility and is incapable of managing the country going forward. There is no reversal in sight and we simply cascade in this death spiral into 2032. Perhaps now we can see that indeed the United States will cease to exist as we know it after 2032. The USA will be prone to separatist movements as well after 2024. That appears to be the target for absolute political disintegration.