Have you checked the returns on your dividend-paying stocks lately?

See, most value stocks also pay dividends. And value stocks have been on an incredible run over the last month. They’ve outperformed growth stocks by 9%, according to Bank of America Merrill Lynch.

This isn’t normal. Value stocks haven’t outpaced growth stocks by this wide of a margin since 2010. And this is probably just the start.

Once they break ahead like this, value stocks usually outperform growth stocks for another nine months. This pattern has held up around 75% of the time since 1986.

Those are pretty good odds, making now the perfect time to load up on value stocks. Three in particular…

When investors talk about “value stocks,” they mean stocks with strong fundamentals that are relatively cheap. A lot of these stocks also pay high dividends.

Value stocks have shot up 236% since the lows of the financial crisis in February 2009. At the same time, growth stocks like Amazon, Alphabet (Google’s parent company), and Netflix have soared 387%. 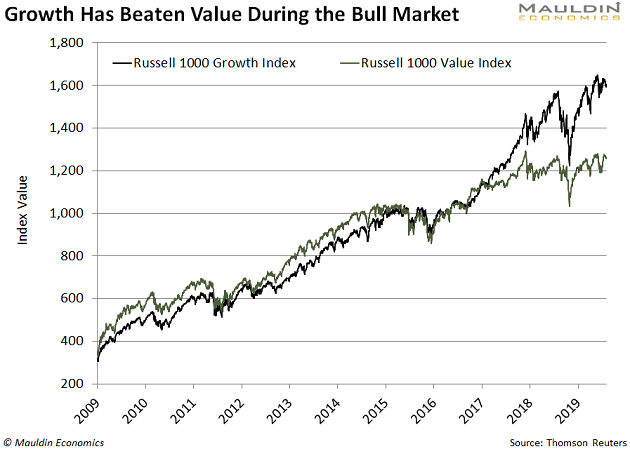 According to this widely used measure, growth stocks haven’t been this expensive since the height of the dot-com bubble in 2001: 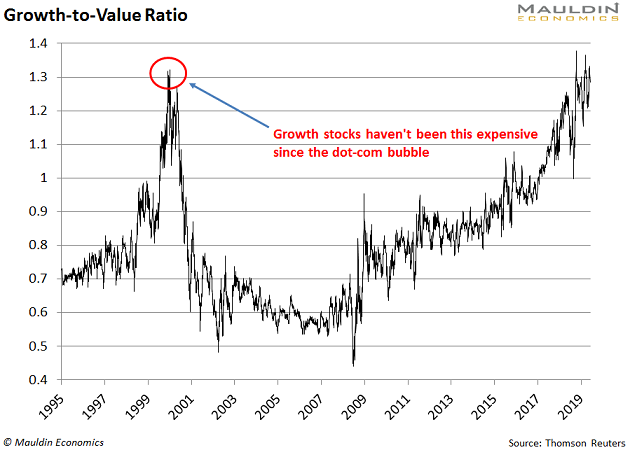 In case you forgot what happened next, the growth-stock-heavy Nasdaq fell 78% when the dot-com bubble burst: 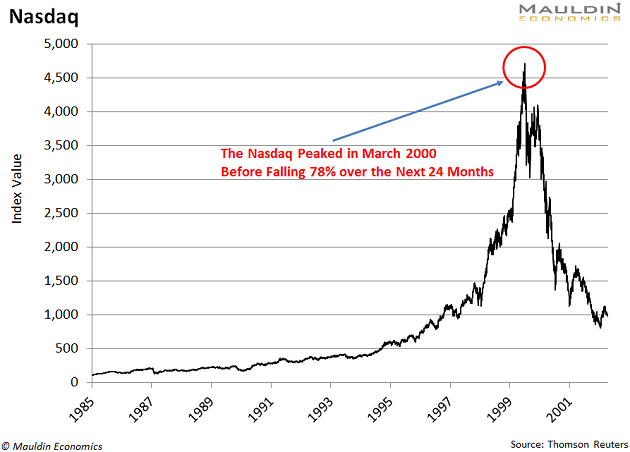 I don’t expect a dot-com-style crash any time soon. But I do expect growth stocks to pull back over the next 12 months. Value stocks, however, should continue to rise, making now a good time to load up on them.

All told, US stocks have risen nearly 200% over the past decade. This is the longest bull market in US history, as I’ve mentioned before.

When a bull market gets long in the tooth, investors start selling their growth stocks and buying value stocks.

That’s exactly what Hugo Rogers, who manages a $5 billion fund at Deltec International Group, is doing. He sees the recent shift to value as a long-term reversal that will last for many years.

It all comes back to interest rates. Many analysts think central banks can’t lower interest rates much further. And for good reason.

Rates in Europe and Japan are already at historic lows. And the Fed has been coy about whether it will continue to cut rates over the long term.

Low interest rates fuel stock prices, particularly for growth stocks that depend on easy money. If the cheap money dries up, many investors will dump growth stocks and pour money into safe and reliable value stocks.

Remember: Value stocks should continue to outperform growth stocks for the next nine months or so.

This shift should boost defensive stocks in particular, according to investment bank UBS. Think consumer staples, telecom, and utilities.

My top consumer staples company is Procter & Gamble (PG). You probably have some of its products in your house right now. Maybe Crest toothpaste, Dawn dish soap, or Bounty paper towels.

Consumer staples are boring. But boring is good. These companies keep making money, day in and day out.

P&G is also a Dividend Aristocrat, meaning it’s raised its dividend at least 25 years in a row. So its 2.4% dividend yield is very safe.

I’m also a big fan of telecom giant AT&T (T). The company is the second-largest wireless carrier in the US. One in three Americans use AT&T. So there’s a good chance you’re using its data network to read this article.

Finally, you should consider buying shares of retail giant Walmart (WMT). It’s the largest physical retailer in the US. And it’s nipping at Amazon’s heels in the e-commerce space.

Walmart is another Dividend Aristocrat. It pays a safe and reliable 1.8% dividend yield.