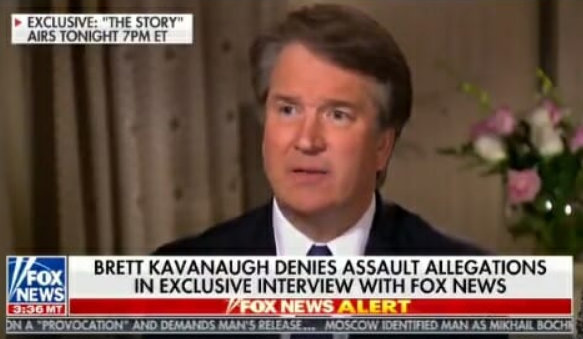 Motto: ei incumbit probatio qui dicit, non qui negat (the burden of proof is on the one who declares, not on one who denies)

If I am not mistaken, this Schumer character, who, amazingly enough, serves as Senate Minority Leader, is a trained lawyer. I wonder where he went to school, and what would his professors have to say about him if they were alive today. Here’s Chuck Schumer on Tuesday, during a presser, saying that SCOTUS nominee Kavanaugh is a non-person, as one of the fundamental principles in common law do not apply to him, i.e. he can’t benefit from the presumption of innocence. Since he’s a straight white man, and apparently a conservative, Judge Kavanaugh must be presumed to be guilty by mere accusation, hence he must prove his innocence before the leftist inquisition. Which is so dumb, I wonder how this guy can find his way home without a GPS. Maybe that’s why he has a personal driver, but I am already ranting. Here’s the video:

Schumer has lost it here. What he says turns our entire legal system upside down. Sorry, Chuck, but it doesn’t work that way. Maybe in Soviet Russia, or in your beloved China the accused must prove his innocence. In the US, we play by other rules. And you’re waaay over the line Chuck.

What Chuck is saying is forget about due process. When it comes to a woman accusing a man of anything, all bets are off, right? This is the leftist utopia the Dimms envision for all of us , if they ever acquire power again. This is why these Midterms are crucial for the future of America. Make no mistake: if these idiots on the left had their way, Kavanuagh would be executed, convicted and tried, Judge Dredd style! In that exact order! And if you think I am kidding, go study what happened during the so-called Cultural Revolution in China. Or Soviet Russia. Or North Korea, after the communist take-over. Modern day Dimms are socialists, and socialism is mere communism without guns. The end-game of socialism is communism.

See also  PARTY OF THE LITTLE GUY: The Rich Get Richer When Democrats Hold Power.

Judge Kavanaugh  has already gone through multiple FBI investigations/background checks throughout his career. Enough is enough. The Republicans must go on with the process and confirm BK for SCOTUS. This pathetic circus must end NOW. That if the RINOs really want to win these Midterm elections. And judging from how they’re reacting to Dimms’ dirty tricks, they would rather prefer to lose and allow the crazies to take over the House and maybe the Senate.

Schumer’s statement tells you all you need to know about Democrats. These people are totalitarians and will discard the most basic principles of American jurisprudence whenever convenient, in order to get what they want. These are very dangerous people and should never be allowed in government.

According to these commies, the Fifth and Sixth Amendments do not apply to conservatives. “Doctor” Ford (cough cough) is presumed truthful, insightful, wise, trustworthy and a candidate for the Mother Teresa Memorial Award. Brett Kavanaugh is presumed aggressive, deceitful, perverted, bad at baking and generally despicable.

To quote Victor Davis Hanson, in our 1984 world, the accused is considered guilty if merely charged, and the accuser is a victim who can ruin a life but must not under any circumstance be made uncomfortable in proving her charges.

The left have managed to put their crazy Marxist ideology into high school and college curriculums, and then use liberal teachers /professors to promote their agenda via indoctrinating our children. This is the exact same method employed by communist governments, and it accelerates more and more every time they gain or hold positions of political authority anywhere in this country. They have filled the minds of millions of Americans with Marxist crap, and they mostly target the youth because they know they are the most vulnerable and the easiest to indoctrinate. I think the time is long over due to get their leadership rounded up and put them behind bars to protect this country from further damage. But I am just a dreamer.