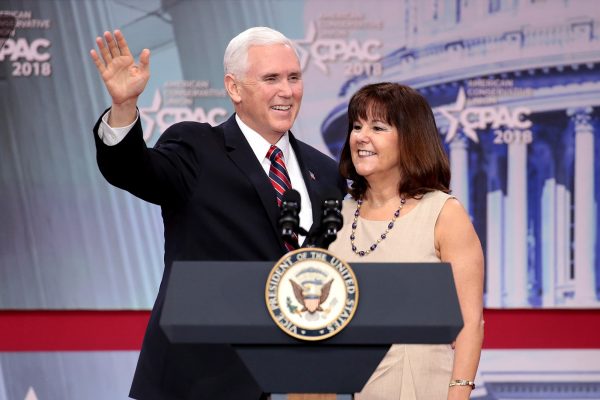 Mike Pence is the most hated vice-president in modern American history, and mountains of abuse have been heaped upon his wife Karen Pence.  The left hates them with a passion, and the reason they are hated so much is actually very simple.  It is because they are Bible-believing Christians.  In America today, there is so much fuss about the political rancor between “the right” and “the left”, but what we are facing in this country is so much deeper than that.  In reality, we are in the midst of a culture war that has been raging for decades, and the anti-Christian worldview that the left espouses has been winning that war.  But now Donald Trump and Mike Pence are attempting to reverse the tide of the battle, and this is driving the left nuts.  And even though Mike Pence is a very mild-mannered individual, celebrities such as Lady Gaga and Joy Behar have made national headlines by viciously attacking his Christian faith.

But many of us were shocked by how vicious this most recent attack on Karen Pence has been.  The fact that she is returning to teach art at a Christian school that requires teachers to live according to Biblical standards of morality has created a tremendous uproar…

According to a job application for the Immanuel Christian School, a private school, applicants must initial a passage promising to “live a personal life of moral purity”.

It lists homosexuality along with premarital sex, polygamy, sexual harassment and sex abuse, among other factors, as examples of moral misconduct.

“I understand that the term ‘marriage’ has only one meaning; the uniting of one man and one woman,” the document states.

For most of American history, basic moral values such as those united the nation, but in 2019 everything has been turned upside down and suddenly those views are considered to be “scandalous”.

In fact, one school has already announced that it will no longer send their sports teams to Immanuel Christian School because of these values…

In a letter to parents, the headmaster of Sheridan School, located in the nation’s capital, announced her students will no longer be participating in sports games with Immanuel Christian School, the private school where second lady Karen Pence is serving as an art instructor, unless they are home games.

Jessica Donovan explained to parents that, even though the self-described “progressive” institution has played games against Immanuel for years, they will no longer be doing so because of the recently revealed doctrinal beliefs espoused by the Springfield, Virginia, school.

For Mike and Karen Pence, this is nothing new.

They have been immersed in the culture war for a very long time, and when he served in Congress even members of his own party would speak derisively about him…

To his colleagues on Capitol Hill—an overwhelmingly secular place where even many Republicans privately sneer at people of faith—everything about the Indiana congressman screamed “Bible thumper.” He was known to pray with his staffers, and often cited scripture to explain his votes. In a 2002 interview with Congressional Quarterly, for example, he explained, “My support for Israel stems largely from my personal faith. In the Bible, God promises Abraham, ‘Those who bless you I will bless, and those who curse you I will curse.’ ” He became a champion of the fight to restrict abortion and defund Planned Parenthood.

But through it all, Mike and Karen have never let the pressure change who they are, and this is especially true when it comes to defending the unborn.  Of course you probably already heard about the horrible abortion law that was proposed in Virginia this week, and the following comes from a wonderful editorial that Mike Pence wrote about that proposed law that was published by the National Review…

This week, a delegate to the Virginia state legislature introduced a bill affirming abortion up to the moment of birth. In shocking testimony, the delegate admitted that even when it was obvious that a child was about to be born — in the 40th week of a pregnancy, even in the midst of active labor — this proposed law would allow for the child to be aborted, so long as a single doctor approves.

Governor Ralph Northam, a supporter of the bill, went even further in a radio interview the next day. He tried to reassure its opponents that if a child survived an abortion, “the infant would be kept comfortable. [And] the infant would be resuscitated if that’s what the mother and the family desired, and then a discussion would ensue.”

There’s another word for this: infanticide. And it is morally reprehensible and evil.

Mike’s political views are deeply grounded in Scripture, and for the left that makes him a very “dangerous” enemy.  In one recent book that received a tremendous amount of publicity, the leftist authors referred to him as a “Christian supremacist”…

In “The Shadow President: The Truth About Mike Pence,” on sale Tuesday, authors Michael D’Antonio and Peter Eisner cast Pence’s background – congressman, Indiana governor, Trump VP – in a harsh light, arguing that “the most successful Christian supremacist in American history” is already functioning as a “kind of replacement president” and is preparing to “fashion a nation more pleasing to his god and corporate sponsors.”

There is an almost tangible feeling of hatred in those words, and one can only imagine the abuse that will be heaped upon the Pences if Mike eventually decides to run for president after Trump’s two terms are over.

In fact, many on the left already consider Mike Pence to be more dangerous than Donald Trump.  Just consider the words of the founder of the Satanic Temple…

In a Wednesday interview, Satanic Temple founder Lucien Greaves said that Pence’s Christianity poses a threat to the United States.

“Trump is too stupid to predict; the guy has no concept of his own limitations,” Greaves told the Daily Beast.

“The thing that makes me most comfortable with Trump is the fact that he has no vision. Mike Pence really scares me: Pence has a clear, theocratic vision for the United States.”

Yes, the United States definitely needs to return to the Christian values that this nation was founded upon.  Mike Pence is working very hard to try to do this, and he should be greatly applauded for doing so.

And he definitely needs reinforcements, and so we should do our best to send as many like-minded men and women to Washington as we possibly can.