This is election meddling in every sense of the word and SOROS has been linked to this as the money man.

More proof this whole thing is outside funded.

Remember the 1,600 caravan back in April? It was organized by a group called Pueblo Sin Fronteras [Communities without borders] — funded by George Soros… Along with CARA.

WASHINGTON – Hundreds of Central American migrants demanding asylum at the U.S. border with Mexico Sunday may be poor, but they have support of major foundations, corporations and billionaire George Soros for their well-organized caravan-style invasion.

President Trump has instructed the Department of Homeland Security not to allow the caravan into the U.S. to hear their asylum claims. They are expected to attempt to enter the U.S. Sunday.

The caravan is organized by a group called Pueblo sin Fronteras. But the effort is supported by the coalition CARA Family Detention Pro Bono Project, which includes Catholic Legal Immigration Network, the American Immigration Council, the Refugee and Immigration Center for Education and Legal Services and the American Immigration Lawyers Association – thus the acronym CARA. At least three of the four groups are funded By George Soros’ Open Society Foundation, WND has confirmed.

Other support groups are funded by the MacArthur Foundation, Ford Foundation and the Carnegie Corporation.

Alex Mensing is one of the organizers of the Pueblo sin Fronteras group, serving as an official spokesman at the border. While identifying himself as a paralegal at the University of San Francisco’s Immigration and Deportation Defense Law Clinic, he also works with CARA. He regularly briefs leftist website and magazine Mother Jones, also a major recipient of Soros grants.

Pueblo Sin Fronteras is a member of the National Day Laborer Network, which is affiliated with United for Justice and Peace, Caravan Against Fear and Freedom Road Socialist Organization. The connections run deep between left-wing activism and corporate and foundation sponsorship.

The Democratic Party links are also in strong evidence. Earlier this month, Oregon’s Democratic Governor Kate Brown accepted a contribution to her re-election campaign from Soros – his first direct involvement in that state’s elections. Three days later, Brown announced the Oregon National Guard would not be participating in President Trump’s effort to get the Guard providing border security.

James Woods: “So consider this: it is over 2,000 miles from Tegucigalpa, Honduras to Phoenix, Arizona. Hard to believe a bunch of people just randomly decided to pack a lunch and walk TWO THOUSAND MILES to anywhere. “ 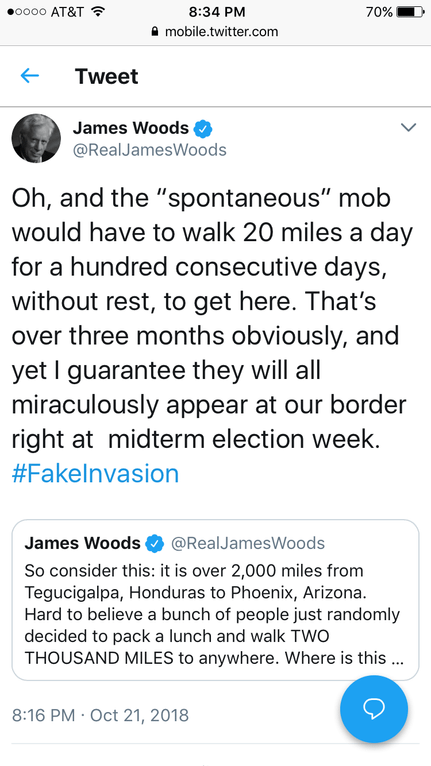