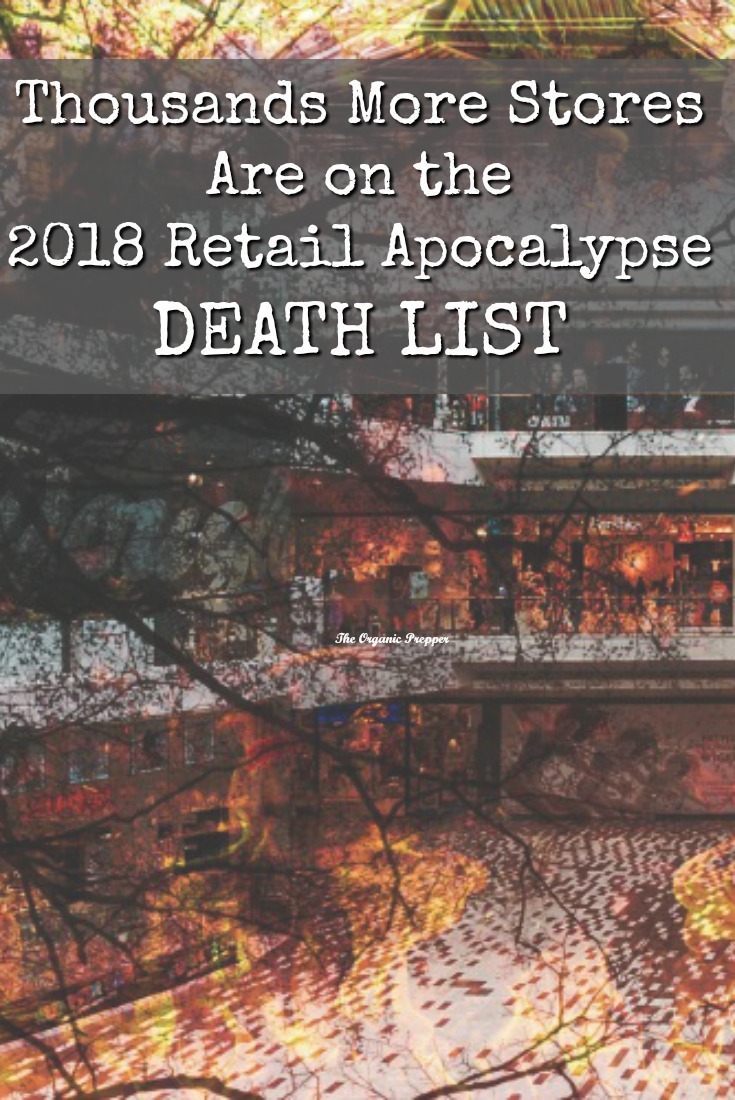 Every year, it seems like more and more retail outlets are going out of business, resulting in the loss of jobs and local supplies. Last year, hundreds of stores closed, and this year, even more shops are scheduled to shut their doors for good.

This year, in an effort to save their businesses, the following retailers will close hundreds of their stores, according to Fox Business.

And these are just the people who have announced store closures so far. In an environment hostile to brick and mortar businesses, more are sure to come.

Tens of thousands of jobs will be lost.

Even if you don’t like to shop, this is a sign of economic trouble. The malls that sit empty are a sign of massive unemployment.
Jobs in the retail sector are the most prolific in America, employing 4.3 million workers as salespeople and 3.3 million workers as cashiers. (source) The current store closures mean the end of employment for tens of thousands of workers.
All in all, the collapse of the retail industry could, at some point, put the livelihoods of more than 7 million people in jeopardy. Perhaps the doomsaying economists like Peter Schiff and Dave Kunstler are right when they warn that a Great Depression the likes of the one in the early 1900s is upon us. That means not only massive unemployment but also massive hyperinflation, making it nearly impossible to stay fed.
Let’s add to rising retail unemployment the move to more self-checkout, more AI, and more computerized systems instead of human staff. It’s not too hard to understand why people could soon be dependent on a Universal Basic Income and a return to an almost feudal society.

A Great Depression now would be far worse than the historic one we all look back on.

And if that’s the case, it’s bound to be even worse. Back in 2006, our urban population exceeded our rural population for the first time ever. This means that people will be unlikely to have the space to grow food for self-reliance.
As well, we’ve gotten so far away from the skills of self-reliance that it’s practically a lost art. Our society is one of consumers, not producers, and this means that in a depressed economy, many more people will be at the mercy of government handouts. And let’s face it, in a depression, those handouts, if they happen at all, will be very sparse.
These days, most folks don’t know how to grow food, preserve food, sew, or build. For a list of self-reliant skills and links to places that will help you learn them, go here to my Self-Reliance Manifesto. No matter where you live, some of these skills will be applicable you, and it’s more urgent now than ever to put them into practice. To learn more about living through a societal and economic collapse, check out articles by Jose, who is currently trying to get his family out of Venezuela due to their own crisis. (Here’s one that is really enlightening.)

What do you think?

Is the retail apocalypse a sign of impending financial doom or merely a move toward a more digital society? Will unemployment begin to rise even further?

5 thoughts on “Thousands More Stores Are on the 2018 Retail Apocalypse DEATH LIST: Are your local stores on the list?”