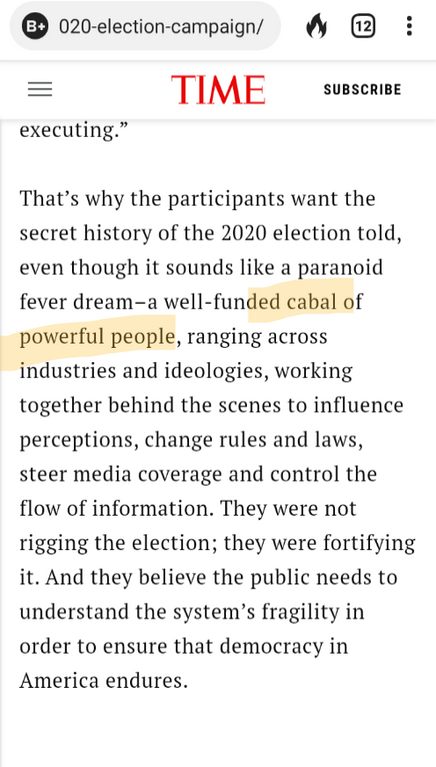 HMMMMM: The Secret History of the Shadow Campaign That Saved the 2020 Election.

As President Trump refused to concede, the response was not mass action but crickets. When media organizations called the race for Joe Biden on Nov. 7, jubilation broke out instead, as people thronged cities across the U.S. to celebrate the democratic process that resulted in Trump’s ouster.

A second odd thing happened amid Trump’s attempts to reverse the result: corporate America turned on him. Hundreds of major business leaders, many of whom had backed Trump’s candidacy and supported his policies, called on him to concede. To the President, something felt amiss. “It was all very, very strange,” Trump said on Dec. 2. “Within days after the election, we witnessed an orchestrated effort to anoint the winner, even while many key states were still being counted.”

In a way, Trump was right.

There was a conspiracy unfolding behind the scenes, one that both curtailed the protests and coordinated the resistance from CEOs. Both surprises were the result of an informal alliance between left-wing activists and business titans. The pact was formalized in a terse, little-noticed joint statement of the U.S. Chamber of Commerce and AFL-CIO published on Election Day. Both sides would come to see it as a sort of implicit bargain–inspired by the summer’s massive, sometimes destructive racial-justice protests–in which the forces of labor came together with the forces of capital to keep the peace and oppose Trump’s assault on democracy.

Time’s article is going to anger a lot of Trump voters, giving them plenty of evidence that the system was rigged against them — and possibly firing the opening salvo of the 2024 presidential campaign.