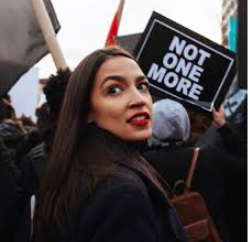 In the most shocking political upset since Trump defeated Hillary, Alexandria Ocasio-Cortez defeated Joseph Crowley in New York’s 14th Congressional District. Crowley was a 19-year incumbent and had not faced a primary challenger in 14 years. Crowley was also the number four Democrat in the House of Representatives and was expected to rise to the speaker’s lectern if Democrats retook the lower chamber this fall. This was a true David and Goliath moment in politics.

Although it seems good that an establishment figure like Crowley was defeated, this election result could be the beginning of a new and dangerous chapter of United States politics. Ocasio-Cortez is a Democratic Socialist and has many radical views on economics. She has promised to fight for things such as Medicare for all, tuition-free universities and trade schools, universal jobs guarantee and housing as a human right. These programs would require an astronomical level of spending for a country already $21 trillion in debt. 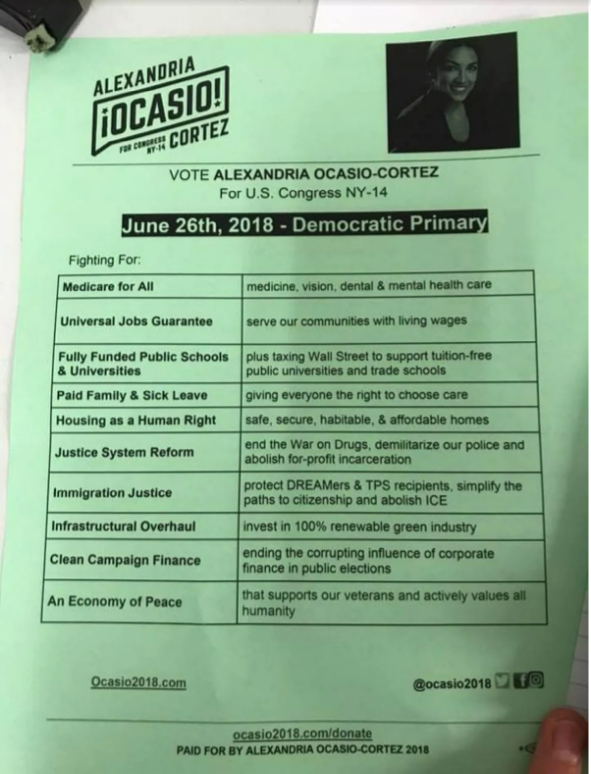 Ocasio-Cortez is appealing to the fast growing, socialist-leaning group of young leftists. And for a country that has been ravaged by endless war spending and banker-made financial catastrophes, why wouldn’t her platform sound appealing. The problem with socialism is that free stuff always sounds appealing. But as economist Thomas Sowell said:

READ  Hero Bystanders Save Female Officer after Man Attacks Her, Brings Her to the Ground

Who lives by words more than politicians? And who would eat up those words more than a population in economic decline? People are feeling the strain of a declining US empire and are desperate for someone or some institution to come to their rescue. However, if you give the government the power to “solve” all your problems, you are also giving the government the power to strip you of your freedom. Inevitably, this tradeoff is how dictatorships are born.

No one was more aware of this than Scottish historian Alexander Fraser Tytler. In 1787, Tytler wrote the following about the newly-formed United States Republic and the nature of freedom:

READ  Hero Bystanders Save Female Officer after Man Attacks Her, Brings Her to the Ground 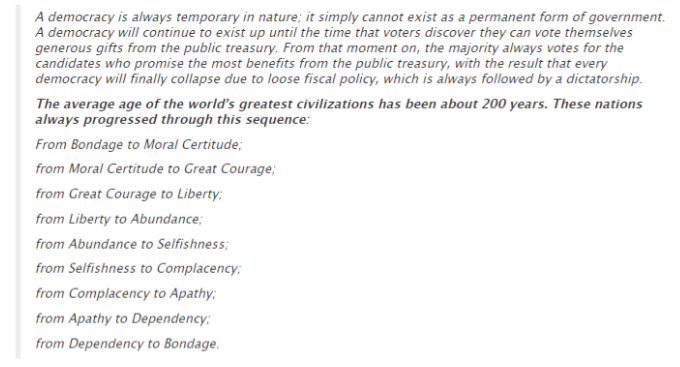 Tytler examined the path of every great civilization before him and noticed a cycle. He believed that the democratic process was temporary and would inevitably lead to dictatorship.

The US has eroded its republic and moved closer to a pure democracy. Voters have figured out how to vote themselves generous gifts from the public treasury by voting for candidates that promise the most. In the modern US, these candidates call themselves Democratic Socialists. We have clearly fallen a long way from a courageous society fighting for freedom.

The infuriating part about this is that we saw this play out in Eurasia last century, yet we continue to make the same mistakes that led to 100 million deaths at the hands of government. With socialism on the rise in the US, we are likely to suffer the same fate as Russia, China, Romania, Vietnam, East Germany and many others. We can try to turn the tide, but it will be one of the most difficult things a civilization has ever accomplished.