Given that political power in America is a pay-to-play auction in which the highest bidder wins, how this incomprehensibly lopsided ownership of wealth plays out is an open question.

Wealth inequality easily falls into an abstraction unless we contextualize it in meaningful ways. I’ve annotated two St. Louis Federal Reserve (FRED) charts–the net worth of America’s top 1% and the net worth of America’s bottom 50% of households, roughly 66 million households–to show their net worth and their share of all household net worth, and put this in the context of inflation and GDP (gross domestic product) of the U.S. and other nations.

These charts may look complicated but the idea is actually pretty simple: I’ve noted how each group (the top 1% and the bottom 50%) did at the top and bottom of each bubble: the dot-com bubble in 2000, the stock/housing bubble that topped in 2007, and the current bubble, noting the pre-pandemic data at the end of 2019 and the most recent totals (2nd quarter 2021).

Next, I pose a simple question: if the net worth of each group had tracked the growth of America’s GDP (i.e. its real economy), where would its net worth be now? All else being equal, the assumption that net worth would rise more or less in lockstep with the expansion of the entire economy makes sense.

I note both the dollar amount of each group’s net worth and their share of total household wealth to track their slice of wealth relative to the entire pie of wealth and to each other’s slice. In other words, as the net worth pie expands, does each group expand its share of the pie or not?

What we find is a stunning asymmetry: if the top 1%’s net worth has risen along with GDP since 2000, it would now be about $21 trillion. Instead, it’s now over $43 trillion, a $22 trillion gain above where it would be had it tracked GDP growth.

For context, this is larger than the GDP of the U.S. ($21 trillion) and the combined GDPs of the six largest economies behind the U.S. and China: Japan, Germany, UK, France, India and Italy which total about $20 trillion. It’s more than the nominal GDPs of China and Japan.

See also  Stumbling into World War 3: The US and Germany Agree to Send Battle Tanks to Ukraine

In other words, the $22 trillion gained by America’s top 1% as a result of Federal Reserve bubble-blowing is literally beyond comprehension: s sum larger than entire economies, a sum totally disconnected from America’s real-world economic expansion.

The bottom 50% has lost ground in terms of its share of total household net worth: its already-marginal 3.3% of total wealth in 2000 has slipped to an inconsequential (i.e. signal-noise) 2.3%.

The top 1%’s fortunes have climbed in a series of higher lows and much higher highs: each spot of bother (collapse of the bubble du jour) dented the net worth of the top 1%, but their wealth never even declined to previous troughs. At the bottom of the oh-so horrendous market drop in 2020, the top 1%’s wealth was still double what it had been at the trough in 2009, $30 trillion vs. $15 trillion.

All of this upward shift of wealth accelerates as we approach the apex of wealth-power: a handful of billionaires own more than the bottom 50% (by some measures, the asymmetry is even worse than depicted by FRED data.)

Given that political power in America is a pay-to-play auction in which the highest bidder wins, how this incomprehensibly lopsided ownership of wealth plays out is an open question. The pendulum of wealth-power concentration has reached an extreme, and when it swings back, it will reach an equally extreme position at the other end of the spectrum. 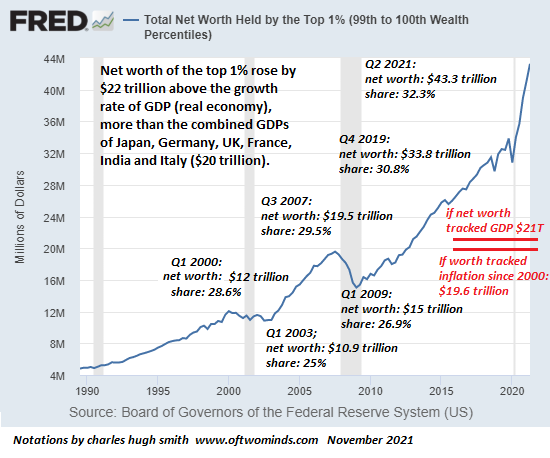 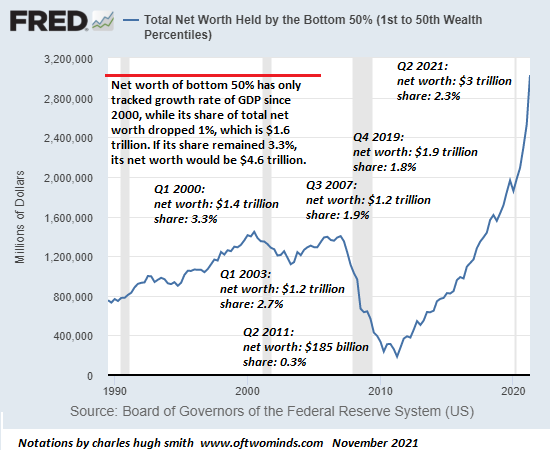