President Trump wants Apple to move all its manufacturing to the U.S., repeatedly warning that he will slap tariffs on Apple products in an escalating trade fight with China. He might be onto something because the economy is generating factory jobs at an impressive clip, growing 3.1% over the first 21 months of his administration. This made us wonder what the best American manufacturing companies are regardless of where they locate most of their facilities. 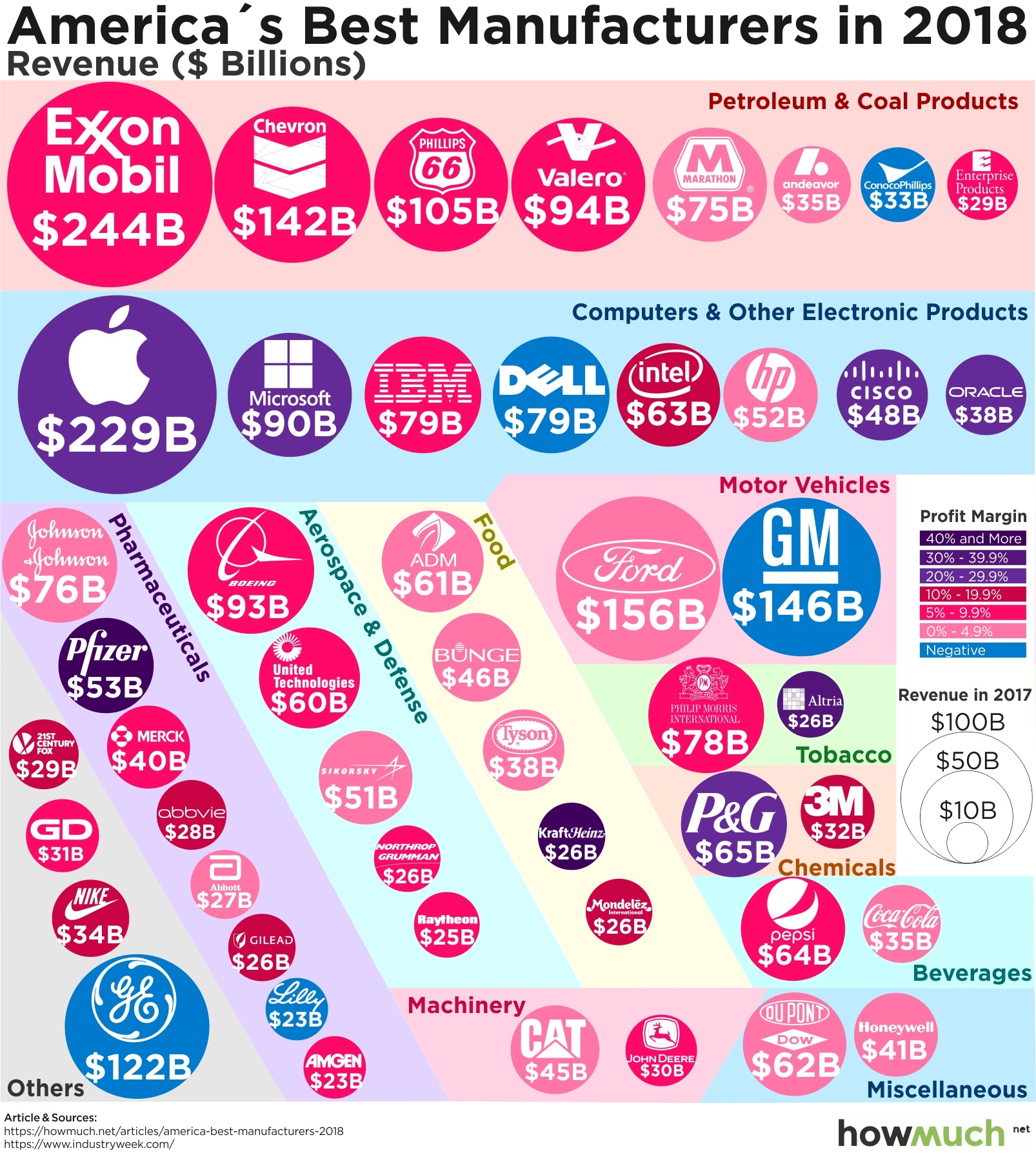 We took IndustryWeek’s ranking of the 50 best manufacturers in the U.S., which looks at financial performance across several different indicators to uncover the strongest companies. These include profit margin, sales turnover and return on assets, among other metrics. Our visual lets you immediately digest the rankings across several different industries, focusing in particular on revenue and profitability.

We would argue that profitability is the single most important thing to measure. These are the top ten manufacturers in IndustryWeek’s list ranked in order of net income ($B).

Apple is clearly in a class of its own with net income approaching $50B last year. To be fair, that figure includes income across its multiple businesses, including App Store purchases, iTunes and device sales. Microsoft, Oracle and Cisco each have multi-billion dollar business models with profit margins over 20%. But the combination of revenue and profitability at Apple, together with the other technology companies in our visual, clearly indicate where the big bucks are to be made.

The tech setor isn’t the only manufacturing sector with revenue exceeding $100B. Petroleum and coal companies remain massively profitable, albeit at much tighter margins. Exxon Mobil actually generates the most revenue of any company at $244B.Chevron and Phillips 66 both hold their own at $142B and $105B, respectively. Auto manufacturers likewise crack the $100B mark, but GM deserves special mention for its negative profit margin of -2.65%, one of only five companies in our visual that’s actually losing money.

Speaking of losing money, GE is still in these rankings because the numbers come from 2017. GE is a case study in how easy it can be for major companies to fall from grace. The company’s stock has plummeted throughout 2018, and as of this writing is now trading at$7.10. And columnists are now publishing serious articles wondering if the company will even survive, much less make it back into the Dow.

All of this goes to show that manufacturing, like any of industry, is prone to ebbs and flows. Only time will tell if GE will be around long enough for next year’s rankings to come out.