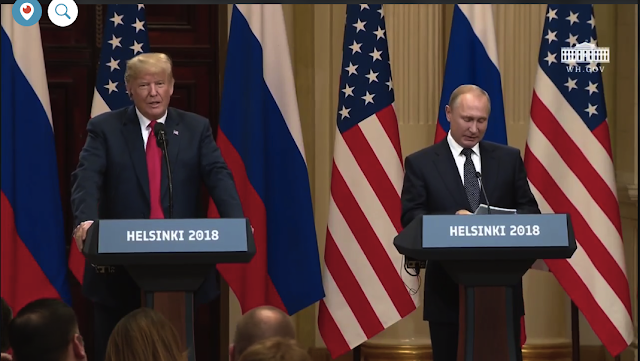 Trump declared: As of today the Cold War is over.
So far it is just words & we shall have to see what happens, but the words from both Putin & Trump were very encouraging.
The #DeepState & the Neocons will do everything in their power to prevent Peace breaking out#HelsinkiSummit pic.twitter.com/4US2hhdwsg

Trump: “We discussed a wide range of critical issues for both our countries. Our talks were deeply productive.
From America’s earliest days our leaders have understood that engagement & diplomacy are better than conflict & hostility.”
Putin #HelsinkiSummitpic.twitter.com/qP158DPfhZ

Trump: “The US has been foolish, we’ve all been foolish. We should have had this dialogue a long time ago.”

Putin rejects allegations of meddling in US elections.

Putin: “We had frank and businesslike discussions, I think we can call it a success & a very fruitful round of negotiations.”
“We examined the present and future of US-Russia relations.”
Trump Putin #HelsinkiSummit#Helsinki2018pic.twitter.com/7ef3xFgzQd

Trump asks why did the FBI never take the DNC servers to do a proper investigation?
What happened to the DNC servers?
Why did 33,000 of Hillary’s emails disappear?
Brings up the Awan Dem IT scandal.

Putin offers to cooperate with Mueller in the questioning of the Russians he has indicted.
(Because Putin knows there is nothing to the baseless and ridiculous, politically motivated, charges Mueller has made.)
Helsinki#Helsinki2018pic.twitter.com/xdCE9CX12j

Trump Putin Press Conference
Trump “This just the beginning of a longer process. It has been a constructive day in the interests of both of our countries. This is just the start of our dialogue and conversations.”
Helsinki#Helsinki2018pic.twitter.com/XxKEAYRcZO