It all started as a joke to describe the high level of hysteria coming from the Trump haters. However, there appears to be a great deal of truth to the joke known as Trump Derangement Syndrome. As it is defined in the Urban Dictionary, Trump Derangement Syndrome (TDS) is a mental dysfunction causing those detractors with hateful thoughts and feelings about Donald Trump to go unhinged.

There are many things Trump has decided to do (or not do) that deserve harsh criticism. He hasn’t jailed Hillary or any other corrupt politicians. He has added to the swamp, not drained it. He has continued the reckless spending that will eventually bankrupt the US. Unfortunately, the constant unhinged reactions from people with TDS diminishes and distracts from these important issues.

The constant hysteria has not only distracted us from important issues, it has sent us hurtling toward the most dangerous war in human history. First, consider the supposed Trump-Russia collusion story that began to take off as soon as Trump won the election. Like I said before, many people could not mentally grasp the reality of a Trump administration. To help them cope, they immediately bought in to the mainstream media narrative that Russia helped Trump win the election.

For over a year straight, the mainstream media has bombarded us with story after story about the possible link between Trump and Russia. This added more fuel to the fire of Trump’s haters because it called into question the legitimacy of his presidency. But it also helped the Deep State in a very meaningful way.

In 2015, Russia decided to send its military to Syria to help its ally against invading rebel groups. The US was furious with Russia’s strategic move because the US has had their sights set on overthrowing Syria for several decades. The reason the US wants to overthrow Syria is obvious: to further control the distribution of Middle Eastern oil and natural gas. To justify an invasion of Syria, the Deep State had to first demonize Russia because they are in the way. To do that, they simply implied that Trump is acting on behalf of Russia and Putin. Then, people with TDS automatically considered Russia the enemy. Trump haters are so blinded by their emotions, they can’t possibly recognize that they are being manipulated into hating a target of the Military Industrial Complex.

With another chemical weapons attack in Syria (which many consider to be a false flag) recently being reported, the US establishment is again calling for yet another regime change. Let’s see what the people afflicted with Trump Derangement Syndrome have to say. 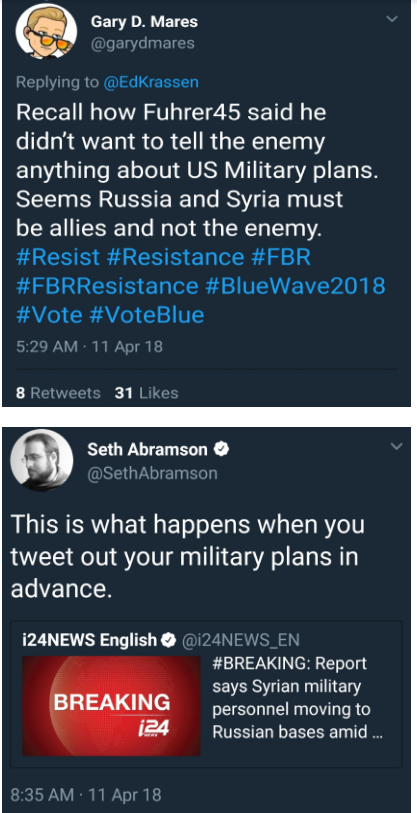