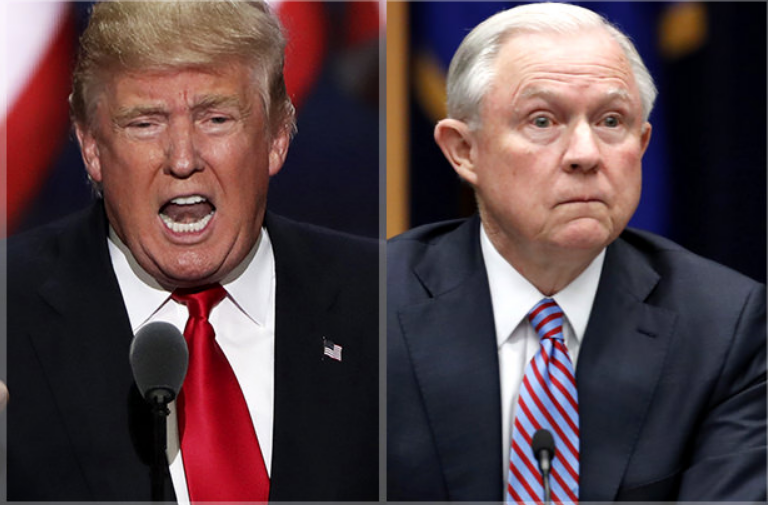 President Trump finally said what we’ve all been thinking since like, forever. In this case, forever means since 2017, when that weird elf-looking southerner became Trump’s AG. Here’s the Donald for hill.tv, whatever that is. I mean, one would expect an actual video of the God Emperor saying those holy words, but we’ll have to settle for Mika:

It’s very enjoyable to see Mika reading (like she means it) the words of the God Emperor, doesn’t it? I find it hugely refreshing. Actually, if you come to think about it, Mika reading President Trump’s speeches in audio-docs or something like that, would make for a cool business idea. I’d definitely buy into that. I mean, she’s really good at this stuff. Now that I’ve mentioned how much I like Mika reading Trump’s words, I’d really enjoy seeing the original “tape”, since NBC is a cable news (that would require them to own at least a video-camera) channel and all that. Anyway, until that day, here’s from The Hill:

“President Trump in an Oval Office interview with Hill.TV launched one of his most ferocious broadsides to date against Jeff Sessions, suggesting the attorney general was essentially AWOL and performing badly on a variety of issues.

“I don’t have an attorney general. It’s very sad,” Trump told Hill.TV in an extensive and freewheeling interview Tuesday from the Oval Office.

The president has long excoriated Sessions for his March 2017 decision to recuse himself from the Russia collusion investigation. But on Tuesday he suggested he is frustrated by Sessions’s performance on far more than that.

I wonder if “Slow Jeff” actually did anything to make the POTUS happy. If I recall it correctly, Queen Ann Coulter has said about Sessions that he was pretty good at “border things”. Like, there’s no wall or anything, but he’s doing a pretty decent job at deporting illegal aliens. If you ask me, anyone could do that, as it’s one of Trump’s administration core policies. And truth be told, Jeff Sessions could do way more than deporting “meskins” and prevent others from entering the country illegally. I really believe Jeff Sessions sucks at everything. To me, it looks like Sessions is more like an immigration minister. His recusal from “all things Russia” means he can’t do much. He can’t even weigh on Trump’s declassification order, because it involves Russia. He should have resigned  a long time ago, because the title is Attorney General; that is what the public is paying for; they are not paying for half or a quarter of an Attorney General.

Here’s more from The Hill:

Trump suggested he had a personal blind spot when it came to nominating Sessions as the nation’s top law enforcement officer.

“I’m so sad over Jeff Sessions because he came to me. He was the first senator that endorsed me. And he wanted to be attorney general, and I didn’t see it,” he said.

“And then he went through the nominating process and he did very poorly. I mean, he was mixed up and confused, and people that worked with him for, you know, a long time in the Senate were not nice to him, but he was giving very confusing answers. Answers that should have been easily answered. And that was a rough time for him.”

The president suggested Sessions’s experience going through the nominating process in the Senate may have impacted his performance as attorney general.

“He gets in and probably because of the experience that he had going through the nominating when somebody asked him the first question about Hillary Clinton or something he said ‘I recuse myself, I recuse myself,’” Trump said.

The FBI in an early 2017 email to a Sessions aide, made public last December, concluded that Sessions did not need to reveal contacts with foreign government officials that were made in the course of his work as a senator.

At this point, my thoughts and prayers are with Rudi Giuliani for attorney general. Actually, Trump requires a brand-new cabinet, if you ask me. And everything depends on these midterms. So, do everything you can and convince your friends to register to vote ASAP, and then get them to the polls. Trump needs a Republican dominated Congress to get things done. We need to win hard on this one. If Trump gets what he needs, he’ll be able to start making some serious moves.

If you think I am exaggerating, here’s Democrats’ state of mind regarding these midterm elections:

The left wants to win this, by any means necessary, and if they achieve their goal, Trump’s agenda will be totally destroyed and he’ll get impeached ASAP. Incitement to commit a federal crime is not protected under the first amendment. Not that this ever stopped any of these leftists from spouting off at the mouth before. Only someone with the intent to ignore US law would say something like this. Call a spade a spade. These dimms are godless Communists.

Now, think of your children.

What kind of a future are you leaving them?