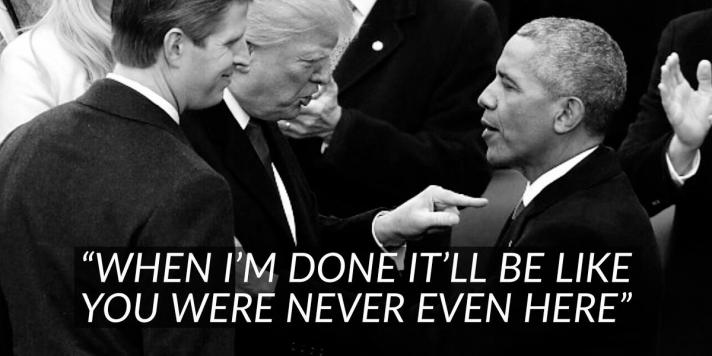 Dwight and Steven Hammond are 2 Oregon ranchers who were convicted of arson back in 2012 by Barack Obama’s administration. The prosecutors used a 1996 anti terrorism law to do that, a law that carries a minimum sentence of 5 years.  However, Federal Judge Hogan cut both ranchers’ sentences short, on the grounds of cruel and unusual punishment. After serving Judge Hogan’s sentence, the 2 Oregon ranchers were freed, yet in 2014, the 9th Circuit (aka the 9th circus) ordered the Hammonds back into prison, to serve out the rest of the 5 year minimum sentence. Local protests ensued following the 9th Circus ruling, leading to an armed protest in Oregon’s Malheur National Wildlife Refuge from Jan 2. to Feb. 11, 2016. On Tuesday, President Trump issued full pardons to 76 years old Dwight Hammond and his son, Steven, who is 49.

Absolutely terrific news. Every now and then, the ‘good guys’ do win. It’s a shame, however, the price that had to be paid before justice prevailed. Thank you President Trump. Keep up the good work. While it may not seem like it, the majority of the citizenry is behind you. Hopefully the ‘silent majority’ will show you the level of support come the mid-term elections. God Bless the Hammonds, the Bundys, their supporters and the soul of LaVoy Finicum. God Bless Our President, Donald Trump. And, God Bless America, as she shall surely need it, as Patriots and freedom loving people continue the push against the never ending insanity of the ‘Progressive Movement’.

People who have followed the Bundy and Hammond sagas know that no crimes were committed by either family in these cases. In the Hammond case, the fire that is referred to was a backfire set to save BLM land. Let me explain: it wasn’t the Bundys who set the fires on the public grazing lands. It was the BLM themselves! The Bundys set a back fire along their own fence line to control the burn from coming onto their own grazing lands, and that’s why the BLM claimed they were setting fire to the public grazing lands. No, the Bundys were trying to SAVE their OWN grazing lands from the BLM contractors who had set the fires, themselves!

This happened because former president Barry Obama, in his quest to implement Kenyan socialism in the US, wanted the BLM to steal everyone’s land. That’s what communists always do,  as they don’t believe in private property. Moreover, the US government already (and illegally) owns almost entire states, but that’s another story. Obama is also a firm believer in the UN Agenda 21 program, under which  the “country” (as in the state) owns all of the land, and needs to start taking it back. It’s all part and parcel of the New World Order, which is international communism rebranded for millenials.

Now Trump needs to pardon Julian Assange. Why? Well, if Assange comes out and says that Seth Rich gave him the Wikileaks info on Clinton, the whole Russiagate and Mueller investigation will be dismantled. Clinton would be indicted for Seth Rich’s murder and it would lead down the entire rabbit hole, down which the entire swamp would be drained! Seth Rich was aware and angry that the DNC violated campaign laws in order to take the nomination from Sanders to give it to Clinton. Donna Brazile has come out with proof that the Clinton’s rigged the primary against Sanders.  Seth Rich likely leaked the DNC servers to Wikileaks, and Russiagate is the cover up for the DEM snafu. Rich’s murder was to silence the smoking gun. Russiagate is the bait and switch of the real crimes. I wonder if Trump would ever pardon Assange and strike a deal for that information? He kind of REALLY owes his presidency to Wikileaks!!