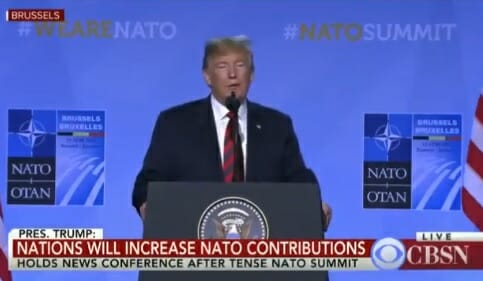 For those of you who are reading just the first couple of paragraphs (and eventually the title if you’re having a good day) from an article, let me put you at ease from the beginning: yes, President Trump asked (rhetorically) if it was finally the time for the US to pull out of NATO, but, he continued, we most probably won’t. The POTUS addressed this issue during his EU tour, in Brussels of all places. Now, you can go back to sleep, or play Pokemon, peck at your smartphone or whatever. Getting a little bit more serious, even if it’s summer and the living is easy, this question is like a splinter in many conservatives’ minds: is NATO becoming obsolete?

The thing about NATO (the North Atlantic Treaty Organization for millenials) is that it was created to protect Western Europe from the possible expansion of the Soviet empire, also known as CCCP/The Evil Empire (in President Reagan’s parlance), during the Cold War era. The problem with NATO today is that Russia is no longer a real threat to anyone (except from snowflakes and libtards fantasizing about Russian bots and election meddling), as it makes for the biggest country in the world with the most resources, yet struggling between 2nd and 3rd world status, with a limp economy the size of Italy (maybe) and an aging and lacking a middle class population. Russia is a sad story by any metrics, and except from their respectable nuclear arsenal, they’re not a threat to anyone, realistically speaking. Their military spending  is like what, 5 percent of ours? Get serious dude. And by that, I mean Hillary.

READ  Rasmussen is pretty fair. They're the organization that had Trump's approval #s at over 50 percent for much of last year.

China, now, that’s another story and way more interesting, both in term of their economy and military spending, but nobody’s talking about China. I wonder why. Here’s the speech the POTUS delivered in Brussels to a stunned audience. It’s worth watching it all:

To sum it up, Trump said that we may pull out of NATO, but, obviously, we most probably won’t. The problem with NATO is that its budget is basically 85% US. The same goes for the troops and military equipment, the vast majority is US. NATO is practically the  US Army overseas rebranded. And I can’t see a single benefit for the US in this deal. Can you? The US has the biggest military on the planet anyway. We have military bases in God knows how many countries (over 1000 bases all over the world), we’re the new Roman Empire with a twist (Pepsi Twist and Coke, plus Internet, for winning hearts and minds while dropping democracy bombs all over the place).

We have huge military spending, as we spend maybe a trillion dollars a year on defense (read military industrial complex, to quote from classics) only. And we are not your daddy Germany. NATO is an obsolete thing and the war is over, Germany. The cold war, that is. NATO and the Europeans who love migrants from the third world, but hate to contribute their fair share to NATO’s budget (they are all below the 2% target of GDP spending on defense, all except from Poland and UK maybe) were put on notice today.

Trump also blasted Germany, for becoming energy-dependent on Russia, instead of buying US gas/coal/oil etc (Exxon approves of this message). Pretty interesting statement, considering that Russia’s economy  relies heavily on energy exports, and if Germany (the EU’s biggest economy) turns off the spigot, Russia enters a horrible recession. And all that coming from Trump, who’s Putin’s puppet and all that retarded rhetoric from the left. Boggles the mind, really.

That’s the message from the POTUS in not so many words. What do you think?