by Daniel Carter
Trump continues to make a mistake so costly that it could relegate him to the title of worst president of all time. Let me say first, if you are a Trump supporter, I am not your enemy. I am generally indifferent toward Trump and want the United States to succeed no matter who is president. The purpose of this article is to warn you about what the Deep State has in store for Trump and his supporters. Unfortunately, Trump’s rhetoric plays right into their hands.
Recently, Trump made the mistake yet again by tweeting this:

The Dow just broke 24,000 for the first time (another all-time Record). If the Dems had won the Presidential Election, the Market would be down 50% from these levels and Consumer Confidence, which is also at an all-time high, would be “low and glum!”

President Trump also points to the soaring consumer confidence index as proof of his positive impact on the economy. But again, things may not be as bright as he makes them appear. As you can see from the 50-year chart below, it is not uncommon for consumer sentiment to spike right before a recession (gray shading). The Animal Spirits concept helps explain why enthusiasm and euphoria are so high near an economic crash. Near the end of the economic cycle, people take excessive risks (e.g. taking out loans, investing in risky assets). They don’t do this because the economy is good but because they have a fear of missing out an opportunity.

Trump takes credit for the stock market as well. With stock market valuations at extreme levels and in the territory of becoming the longest and largest bull market of all time, the party will be over very soon. 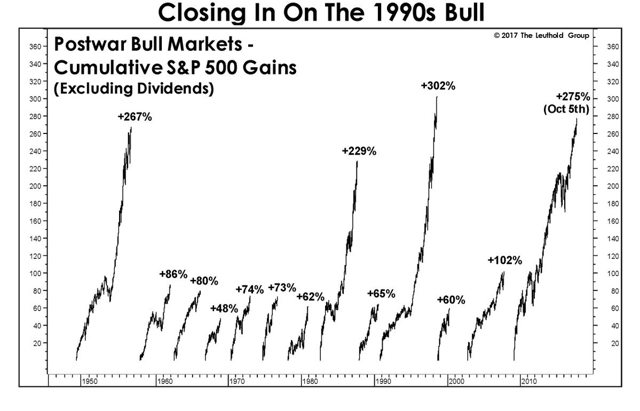 The media has wasted no time in giving President Trump more rope to hang himself. They have begun to attribute every market move to the developments of his tax reform bill. The media will connect every up move, down move and side move in the market to the likelihood of tax reform passing. The media undoubtedly works for the Deep State, and the Deep State wants Trump to take ownership of the economy.
The Deep State, including the banking cartel, knows they have set our nation up for another massive collapse. They sunk interest rates to near zero and pumped trillions of dollars into the banking system. This has encouraged people to take unnecessary risk, and the whole mess will be liquidated very soon.
If you care about Trump or the conservative message, it would be in your best interest to dispel the idea that Trump is responsible for the thriving economy. If you think social unrest is bad now, wait until the net worth of millions of people is cut in half in a matter of months. That situation could be truly terrifying this time around. Trump may be setting himself up for the hardest fall we have seen since the economy collapsed on Herbert Hoover’s watch.