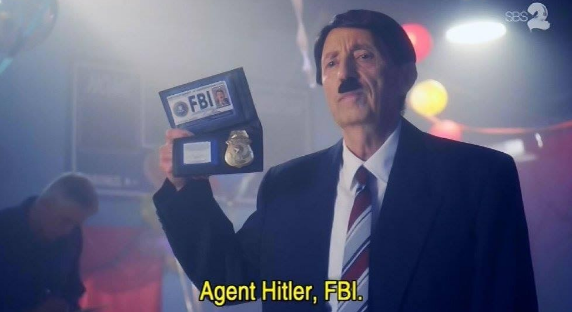 Motto: People who can’t make it through Antifa’s basic training wind up at the FBI.

The tl;dr version of one of the biggest psyops in Amerika since 9/11 is that the FBI was deeply involved in the so-called Capitol Riot on January sixth. As in, they were planning and instigating it.

I already covered the topic back in the day in this article:

This is a hard pill to swallow, but this is what happened, and is continuing to happen.

Everything in 2021 is part of a complex psyop, aimed at right wing Americans, Trump voters mostly, who are designated as white supremacists and domestic terrorists. The end goal is to dissolve the US into Globo Homo Shlomo, or Global Capitalism as they call it, with as little resistance as possible.

Revolver News wrote a piece yesterday in which they detailed the FBI’s role in the “insurrection” and Tucker Carlson covered the story during his night-show.

Why are there so many factual matters that we don’t understand about that day?” “Why is the Biden administration preventing us from knowing?

Why is the administration still hiding more than 10,000 hours of surveillance tape from the US capitol on January 6th? What could possibly be the reason for that – even as they call for more openness… they could release those tapes today, but they’re not. Why?”

“We know that the government is hiding the identity of many law enforcement officers that were present at the Capitol on January 6th, not just the one that killed Ashli Babbitt. According to the government’s own court filing, those law enforcement officers participated in the riot – sometimes in violent ways. We know that because without fail, the government has thrown the book at most people who were present at the Capitol on Jan. 6. There was a nationwide dragnet to find them – and many are still in solitary confinement tonight. But strangely, some of the key people who participated on Jan. 6 have not been charged.”

Look at the documents, the government calls those people ‘unindicted co-conspirators.’ What does that mean? Well it means that in potentially every case they were FBI operatives… in the Capitol, on January 6th.”

“For example, one of those unindicted co-conspirators is someone government documents identify only as “person two.” According to those documents, person two stayed in the same hotel room as a man called Thomas Caldwell – an ‘insurrectionist.’ A man alleged to be a member of the group “The Oathkeepers.”

Person two also “stormed the barricades” at the Capitol on January 6th alongside Thomas Caldwell. The government’s indictments further indicate that Caldwell – who by the way is a 65-year-old man… was led to believe there would be a “quick reaction force” also participating on January 6th. That quick reaction force Caldwell was told, would be led by someone called “Person 3,” who had a hotel room and an accomplice with them. But wait. Here’s the interesting thing. Person 2 and person 3 were organizers of the riot. The government knows who they are, but the government has not charged them.

BREAKING: @DarrenJBeattie of Revolver News breaks down the involvement of FBI operatives who organized and participated in the January 6th Capitol riot. pic.twitter.com/t1UOnT5zgc

Just remember folks: a Klan meeting is always 33 FBI agents and 2 actual “white supremacists”. Also, 90% of “terrorists” would never commit acts of terror if the US government wasn’t coercing them to commit said acts.

The wrong people are in jail.

See also  Tucker Carlson: This is scary (Tucker nails it)

The whole thing was staged. Your own government’s agents and paid informants planned and instigated the ‘insurrection’.

Moreover, the left is now trying to pass legislation akin to the 9/11 war on terror. Just this time, it’s against “domestic terrorists”, i.e. white people who voted for Trump.

Moreover, Biden’s DOJ is building cases against 575 people who participated in the riots, many of whom are held in jail without bail in solitary confinement, beaten and abused by diversity-hires, even if most of them are being charged with trespassing, a minor offense.

Nobody was killed in the riots except from Ashli Babbitt, who was executed point-blank by a Capitol cop, whose name was not released. No congressmen or senators were physically harassed, or even touched, except from AOC who was still somehow almost “literally murdered”, though.

The Capitol riots erupted because the powers that be didn’t want to hear two days of Reps and Senators going on about obvious voter fraud. Trump was unseated in a coup d’etat, and those who helped orchestrating it (the entire DC power structure) are guilty of high treason.

Too bad America is an occupied country.

Prepare for the worst.