It is day 3 of the jury in Kenosha trying to decide if Kyle Rittenhouse should have just allowed himself to be beaten to death or shot to death instead of fighting back.

They know Kyle’s innocent but they are concerned about appearances…the absolute state of America’s  justice system.

They are getting desperate:

Last night a person who is alleging to be affiliated with a national media outlet was briefly taken into custody and issued several traffic related citations. Police suspect this person was trying to photograph jurors. This incident is being investigated much further.

#BREAKING: @MSNBC was barred from the remainder of the #Rittenhouse trial after an employee allegedly followed the jury bus.

Judge Bruce Schroeder called the matter deeply disturbing and serious during a brief statement from the bench.t.co/yHJUNlwp7r

BREAKING: Judge Schroeder bans MSNBC from the Rittenhouse trial after a possible doxxing attempt by a crazy producer, James G. Morrison, was caught following the jury bus transporting them away from the courthouse. Morrison blew through a red light trying to keep up with the bus. pic.twitter.com/Q0v9smBCgr

This is the America that the Left wanted to create, and it’s here 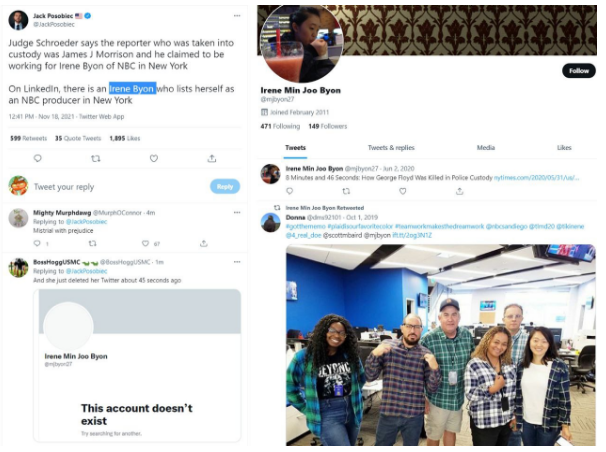 These people want to know the names and addresses of jurors.

They have names and addresses too.

Let’s see if they also have jail time?