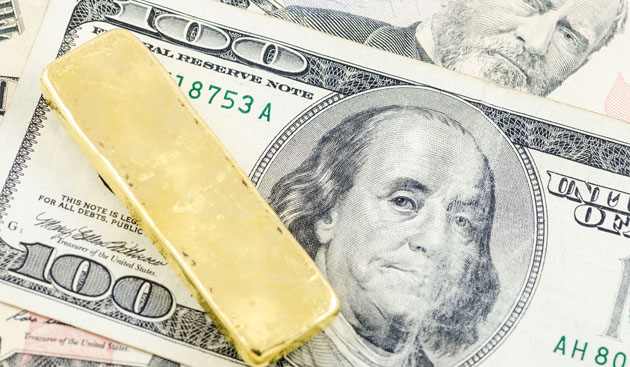 There was an article written a few days back where the author vehemently denied that the U.S. dollar could go any lower and where the phrases “face-ripping,” “face ripper,” and “rip your face off” (as well as derivatives thereof) were mentioned no fewer than nine times in a fifteen-paragraph article. The reasons given were all highly subjective and based in Modern Portfolio Theory, but what was concluded is that, once again, the U.S. dollar remains the “least smelly shirt in the laundry hamper” with aromas emitted by the euro, yen, pound and yuan all significantly more pungent than the Yankee greenback. I whole-heartedly disagree and it has nothing to do with anything taught in the CFA course or at the Rotman School of Business but rather in The Academy of Common Sense and The Ballanger Institute for Non-BS Learning.

Before I proceed, I am growing increasingly tired of the dominance of the machines over market trends with particular reference to “correlations.” Back in the 1980s, the there was a brilliant arbitrageur named Ivan Boesky who specialized in the art and science of risk arbitrage. He was a master of identifying market inefficiencies and capitalizing on them by simultaneously buying and selling items such as corn against wheat, copper against silver, and 10-year bonds against 2-year bonds, always mindful of the significance of the rate of risk-free return. This was long before terms like “alpha” and “beta” and “theta” became favorite cocktail hour buzzwords and used in everyday colloquialisms such as “Excellent alpha, dude!” and “Skin me some beta, bro!” Interestingly, Ivan Boesky was crushing the competition on Wall Street back in 1978 until he was mysteriously arrested a few years later for insider trading and sent to jail. He was replaced by a certain Mike Milliken who was also mysteriously sent to jail for insider trading, which totalled over $6 billion in fines and penalties. The non-bank wizards were all trotted out and summarily shot and were mysteriously replaced by JP Morgan, Goldman Sacks, Citi, Lehman Bros. and Merrill Lynch (to name just a few) who collectively vaporized the financial system and miraculously avoided the slammer. Go figure.

Returning now to the topic of the U.S. dollar (having wandered off in a sexagenarian fade-out), I ask you to look at the chart posted below.

Three times in the past three years has the RSI (relative strength index) for the USD moved above 70. In late 2015, the USD traded up to 100.50 with RSI briefly above 70; it then reversed and went directly to 92. (It did not pass GO and it did not collect $200.) Immediately following the U.S. elections in November, the Trump victory set off such a sublime celebration of U.S. dollar supremacy that it screamed from 97 to 104 where there were two brief interludes above RSI 70 but with the first price peak at around 99 but the second one at 103. (RSI is not always perfect.) It then proceeded to mimic the 2018 playoffs for the two Toronto teams (Maple Leafs and Raptors) and crashed to 91. The bounce to 95 late last year (2017) was anemic after which the market sank to new lows below 90 recently before the current “face-rip” began taking the RSI ONCE AGAIN back above 70 and which as of tonight resides at 76.31 but which will most certainly be higher tomorrow when John Murphy’s charts are updated. This is the fourth time since late 2015 that RSI is bellowing a “SELL SIGNAL,” so why is it again that “EM swap rates” or a “3% 10-year yield” is going to create a panic OUT OF “all other fiat currencies” and INTO the one with the greatest debt threat on the planet?

The entire Western system of banking was totally flawed until around 1990 after which the Americans took the Chinese leaders under their wing and explained so very carefully how the aspirational mechanics of American capitalism work. They explained in meticulous detail how they use MONEY to influence votes and how VOTES can influence money not unlike the symbiosis of moss and lichens or Lewis and Clark. There is no better analysis than in George Orwell’s brilliant novel “Animal Farm” where a cruel despotic farmer is overpowered by the animals he has been abusing whereby it is agreed that they shall now run the farm and divide all spoils equally. Over time, without the protections put in place by any sort of constitution, one group of animals, most aptly being the pigs, decide that they are going to take control of the farm and within weeks, conditions have returned to the same horrific nightmare of overwork and starvation that existed before the farmer was deposed. That in my view is the continuous revolving door called “party politics” where bank-controlled candidates are lured into power on the promise of “hope and change” but wind up being transformed into the same hideous creatures that preceded them. Whether it is a Democrat or Republican, Tory or Labour, Liberal or Conservative, once elected to power they ALL feed at the same trough of avarice, corruption and influence-peddling.

The predominant theme for all of the gold bears in the past five trading sessions was their unanimous conviction that the American greenback was about to embark upon a “face-ripping rally” that would “rip the faces off” those positioned in trades intended to benefit from a declining buck (like commodities including the PMs). This “face-ripping” rally, like the one that arrived just after the Donald was elected, was borne out of a sub-30 RSI reading and unanimous negativity from the resource players (and everyone else). The rally off the April lows is about 5.5%, which compares to the post-2016-election rally of 8.84% but the major difference is that the index is 9.7% lower today than it was at the height of the “Drain-the-Swamp” hysteria. Bottom line: If the past is indeed prologue, then this last ten days that RSI for the USD has resided above 70 represents a major top and from where I sit, it is headed back to the mid-to-low 1980s and that will be silver friendly and is the reason I bought another 3,500 ounces last week.

One week ago. . .bullish reading and last week we got a modest rally.

The gold and silver markets rallied strongly last week as the May 1 COT was especially positive. This week’s COT was neutral for gold but continuing to be quite positive for silver. (From Fred Hickey: “One very interesting detail in today’s COT report for gold. Managed Money (mostly hedge funds) longs taken down to 109.5K contracts-lowest since early 2016 when gold bottomed ($1050). At 2016 gold peak over 300K longs ,2017 peak nearly 270K longs. Huge potential buying pressure…)

Fido was found on Wednesday hiding once again under the shed as I was stopped out of the UXXY trade for a 9.8% loss which is especially aggravating seeing as the earnings season is over and the news flow was not exactly super bullish. I was stopped out at $13.04 after buying the position at an average of $14.45 so with the Friday close of $12.04, it is now $1.00 below the stop-loss exit price and back firmly on the acquisition radar screen and in my crosshairs. I learned a very long time ago that learning to take a “hit” was the singular most-important facet of investing successfully. Now, learning the IMPORTANCE of avoiding a bus is not the same as actually AVOIDING a bus because while the former is easy, the latter is lethal.

And while I have been pretty good at exiting flawed trades away from gold and silver, my cognitive bias towards the precious metals has been an especially costly endeavor over the years. You see, I made so much money in the junior mining sector from 1980 until 1997 that I am forever longing for the adrenalin rush that occurs when you suddenly recognize that you’ve made a major discovery and that your net worth is about to expand geometrically. Riding the euphoria elevator from the outhouse to the penthouse after a major discovery is like getting an injection of morphine in the bum after your broken leg has finally been treated. Problem is, once you are discharged from the hospital with your little pill bottle of Codeine 30s, you are downing the little buggers voraciously trying in vain to repeat that rush of “Madame Morphine” that saved you from the agony of the tib-fib fracture.

So when I saw Mountain Province go from $0.47 in January 1995 to $9.75 in 1996, and because I had been the only broker in North America financing it under $0.50, it was easy to accumulate a 1.5 million share position that I wheeled at north of $7.00 in late 2006. There are more than enough stories like that where people make investments that turn out ridiculously profitable through luck more than intellect but in the 1980 through 1997 period, world-class discoveries were actually rewarded as opposed to being seen as a “liquidity event.”

The problem we have in the junior exploration sector is twofold: 1. We need a sustained advance in all of the inflation-barometer commodities (like oil and copper) and 2. We need a new BIG discovery to jump-start investor greed and envy, which, by the way, we have NOT had recently (with great respect to the Pilbara region of Australia where NOVO (NVO.V) is laying claim to being the next Witwatersrand). Perhaps the next mining cycle will allow enough money to be raised so as to deliver the next Voisey’s Bay or Ekati or Gaucho Ku to the market but since we have no idea when (or whether) that is going to happen, investors like us are going to need to be REWARDED from the fruits of in-depth research and determined due diligence lest we exit the sector forever. Perish the thought but money gravitates to locales where it is best treated.

Originally trained during the inflationary 1970s, Michael Ballanger is a graduate of Saint Louis University where he earned a Bachelor of Science in finance and a Bachelor of Art in marketing before completing post-graduate work at the Wharton School of Finance. With more than 30 years of experience as a junior mining and exploration specialist, as well as a solid background in corporate finance, Ballanger’s adherence to the concept of “Hard Assets” allows him to focus the practice on selecting opportunities in the global resource sector with emphasis on the precious metals exploration and development sector. Ballanger takes great pleasure in visiting mineral properties around the globe in the never-ending hunt for early-stage opportunities.