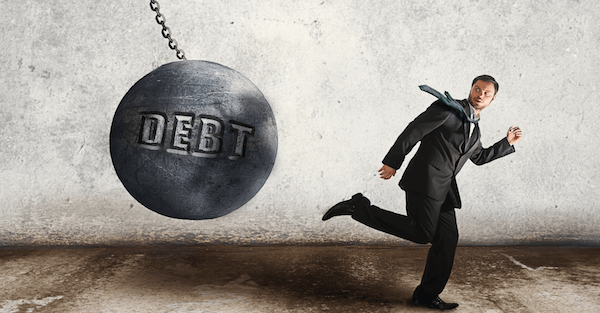 On October 22, 1981, the national debt in the United States crossed the $1 trillion threshold for the first time in history.

It took nearly two centuries to reach that unfortunate milestone.

And over that time the country had been through a revolution, civil war, two world wars, the Great Depression, the nuclear arms race… plus dozens of other wars, financial panics, and economic crises.

Today, the national debt stands at more than $21 trillion– a milestone hit roughly two months ago.

That’s an average of nearly $1.5 BILLION added to the national debt every single day… $62 million per hour… $1 million per minute… and more than $17,000 per SECOND.

But the problem for the US government is that this trend has grown worse over the years.

Think about that: on average, the US national debt increases by more in a split second than the typical American worker earns in an entire year.

And there is no end in sight.

At 105% of GDP, America’s national debt is already larger than the size of the entire US economy. (By comparison the national debt was just 31% of GDP in 1981.)

Plus, the government’s own projections show a steep increase to the debt in the coming years and decades.

READ  BREAKING: in Paraguay, the streets are filled with protestors, who are upset with government corruption and mismanagement.

The Treasury Department has already estimated that it will borrow $1 trillion this fiscal year, $1 trillion next year, and another trillion dollars the year after that.

They’re also forecasting the national debt to exceed $30 trillion by 2025.

To be fair, debt isn’t always bad. In fact, sometimes debt can be useful.

Businesses and individuals use debt all the time to shrewdly finance productive investments.

Real estate investors, for instance, often borrow most of the money they need to purchase a property once they determine that the rental income should more than cover the debt service.

In this way, when applied prudently, debt can actually help build wealth.

And the US federal government did the same thing in its early history.

It was an incredibly astute move on the government’s part, for example, to go into debt to finance the Louisiana Purchase back in the early 1800s, which dramatically expanded the size of the budding nation.

These days, however, the government flushes money down the toilet in the most wasteful ways imaginable, both big and small.

We’ve covered some of the more ridiculous examples in our normal conversations, from that $2 billion Obamacare website to the $856,000 that the National Science Foundation spent teaching mountain lions to run on treadmills.

Even the government’s more legitimate expenses are absolutely colossal now.

Last year the government spent HALF of its budget just to pay for Social Security and Medicare.

The situation is so dire that the government spends more than its entire tax revenue just on these mandatory entitlement programs, plus Defense and interest on the debt.

Even if you could eliminate entire departments of government, they would still be running a budget deficit and going deeper into debt.

The larger the national debt becomes, the more interest the government has to pay each year.

And interest payments increase even more rapidly as rates continue to rise… which is exactly what’s happening now.

A few years ago, the government paid less than 1.5% on its 10-year Treasury note. Today the rate has doubled.

This has a profound impact on Uncle Sam’s cash flow: they have to borrow MORE money just to pay interest on the money they’ve already borrowed… and spend a larger and larger share of the budget on debt service.

It’s foolish to think that this trend has a consequence-free outcome. No nation in history has ever become prosperous by borrowing record amounts of debt to finance reckless spending.