Over the past few months, we have focused – for obvious reasons – on the pandemic and the following economic crisis. However, there are also other important developments happening in the background, apart from media attention that still focuses on the coronavirus. As they can substantially affect the gold prices, precious metals investors should be aware of them.

One of the most important of such issues is the U.S. presidential election that is approaching fast. And the polls suggest that we could see the change of the President in the White House. As the chart below shows, Joe Biden (blue line) has an average polling margin of 9 percent over incumbent President Donald Trump (red line). 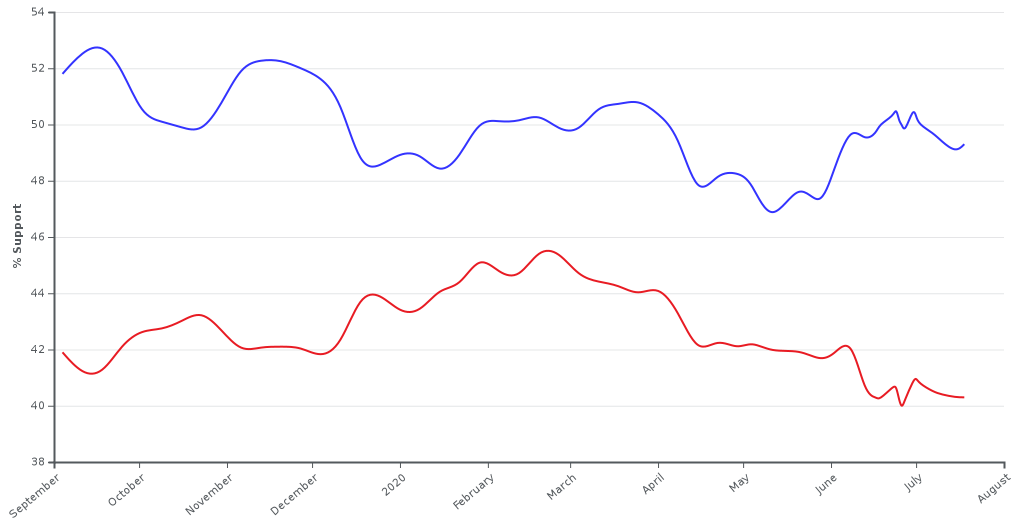 Will Biden win? That’s a great question. Polls say so, but who trusts polls these days? We believe that it is certainly possible, given that some voters could be dissatisfied with Trump administration’s handling of the epidemic, and especially if the second wave of the coronavirus is not contained quickly and the double-dip recession arrives. Trump could share then the fate of George H.W. Bush, who lost to Bill Clinton amid the early 1990s recession following jobless recovery. However, if the economy improves, the race could tighten between now and election day.

What would President Biden imply for the US economy and the gold market? Well, although I don’t support Trump’s trade policy, I’m neither impressed with Biden’s economic agenda. Under his economic revival plan, the federal government would spend $700 billion on research and development for new technologies and energy initiative and on American goods and services. What is key here is that Biden plans to pay for these and other programs by raising taxes “on corporations and the wealthy”. In particular, he wants to hike the corporate tax rate from the current 21 to 28 percent. I can be wrong, but Wall Street would not welcome lifting taxes, especially during the fragile recovery from the economic crisis. So, the stock market could tank, if Biden wins.

But it does not have to… So far, investors are totally unfazed by the polls giving Biden higher chances. After all, still a lot can happen before November, so the markets can be waiting until the outcome of the presidential race looks more certain. It’s also possible that investors expect that Biden would moderate his proposals after elections or that they focus more on other parts of Biden’s agenda. For instance, Biden’s trade policy is less protectionist than Trump’s and he could end the trade wars with China (and other countries) that worried the markets so much last year.

Hence, the possible effect of Biden’s triumph on equities and gold market is ambiguous. Theoretically, given that the stock market rallied, while the price of the yellow metal plunged, after Trump’s victory in 2016 (see the chart below), we should expect the reverse if Trump loses. 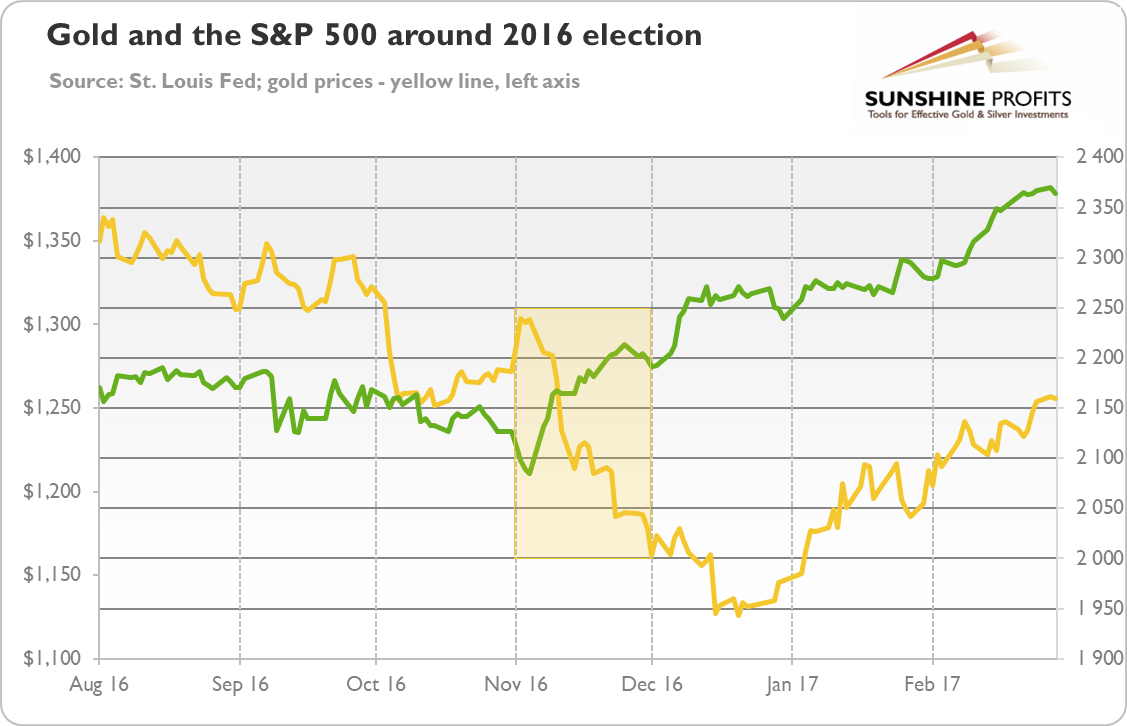 But it should be too simplistic reasoning and both the stock and gold market could easily interpret Biden’s possible victory in a bullish manner, as investors tend to do during bull markets. Or, after an initial, short-term volatility, the underlying upward trends could resume. After all, Biden is generally acceptable to the investors. He is not as radical as Bernie Sanders or Elizabeth Warren. He is actually more mainstream in several aspects than Trump. And the financial markets managed to operate or even thrive under both Trump and Obama, whose vice-president was Biden.

In other words, no matter who will reside in the White House, the current macroeconomic conditions should remain generally favorably for the precious metals. We mean here the environment of  the soaring fiscal deficits (according to the CBO, the federal budget deficit was $2.7 trillion in the first nine months of fiscal year 2020, $2.0 trillion more than the deficit recorded during the same period last year!) and federal debt (according to the IMF, general government debt is expected to rise to 160 percent of GDP by 2030 even without further rounds of fiscal stimulus!), as well as negative real interest rates, and the fastest pace of growth in the money supply in the modern history, as the chart below shows. 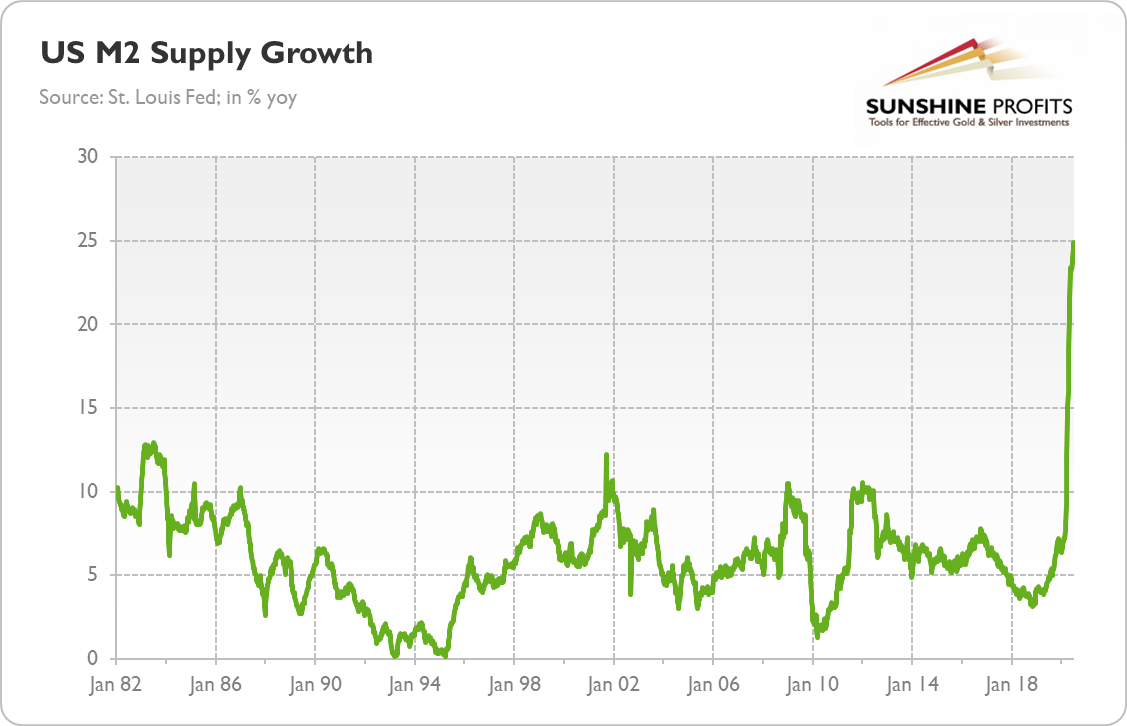 Moreover, no matter who wins, we do not expect radical changes in the accommodative fiscal and monetary policies, and the overall macroeconomic outlook, until the economy fully recovers from the coronavirus crisis. Investors should remember that although politics is important, what the Fed does is also, if not more, important for the stock and gold markets – and the U.S. central bank will not abandon its dovish bias, no matter who would reside in the White House. Neither Trump nor Biden would give up extravagant government spending and stimulus packages. If there is no difference, maybe we should vote for gold?