While the U.S. Shale Industry produces a record amount of oil, it continues to be plagued by massive oil decline rates and debt.  Moreover, even as the companies brag about lowering the break-even cost to produce shale oil, the industry still spends more than it makes.  When we add up all the negative factors weighing down the shale oil industry, it should be no surprise that a catastrophic failure lies dead ahead.

Of course, most Americans have no idea that the U.S. Shale Oil Industry is nothing more than a Ponzi Scheme because of the mainstream media’s inability to report FACT from FICTION.  However, they don’t deserve all of the blame as the shale energy industry has done an excellent job hiding the financial distress from the public and investors by the use of highly technical jargon and BS.

For example, Pioneer published this in the recent Q2 2018 Press Release:

Now, the information Pioneer published above wasn’t all that technical, but it was full of BS.  Anytime the industry uses terms like “Version 3.0+ completions” to describe shale wells, this normally means the use of  “more technology” equals “more money.”  As the shale industry goes from 30 to 60 to 70 stage frack wells, this takes one hell of a lot more pipe, water, sand, fracking chemicals and of course, money.

However, the majority of investors and the public are clueless in regards to the staggering costs it takes to produce shale oil because they are enamored by the “wonders of technology.”  For some odd reason, they tend to overlook the simple premise that…

Of course, the shale industry doesn’t mind using MORE MONEY, especially if some other poor slob pays the bill.

According to a recently released article by 40-year oil industry veteran, Mike Shellman,  “Deep The Denial,” he provided some sobering statistics on the shale industry:

I recently put somebody very smart on the necessary research (SEC K’s, press releases regarding private equity to private producers, etc.) to determine what total upstream shale oil debt actually is. We found it to be between $285-$300B (billion), both public and private. Kallanish Energy Consultants recently wrote that there is $240B of long term E&P debt in the US maturing by 2023 and I think we should assume that at least 90 plus percent of that is associated with shale oil. That is maturing debt, not total debt.

… By year end 2019 I firmly believe the US LTO industry will then be paying over $20B annually in interest on long term debt.

Using its own self-touted “breakeven” oil price, the shale oil industry must then produce over 1.5 Million BOPD just to pay interest on that debt each year. Those are barrels of oil that cannot be used to deleverage debt, grow reserves, not even replace reserves that are declining at rates of 28% to 15% per year… that is just what it will take to service debt.

Using its own “breakeven” prices the US shale oil industry will ultimately have to produce 9G BO of oil, as much as it has already produced in 10 years…just to pay its total long term debt back.

Using Mike’s figures, I made the following chart below: 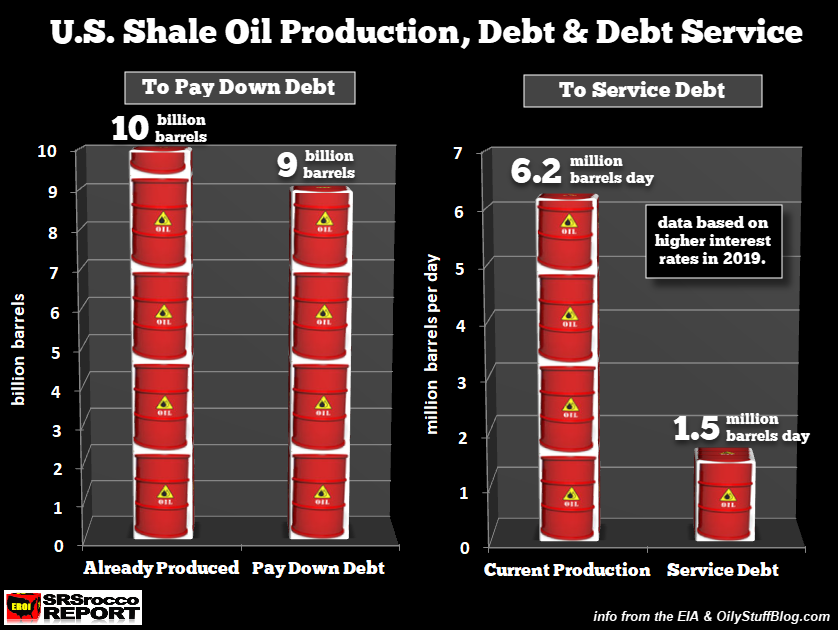 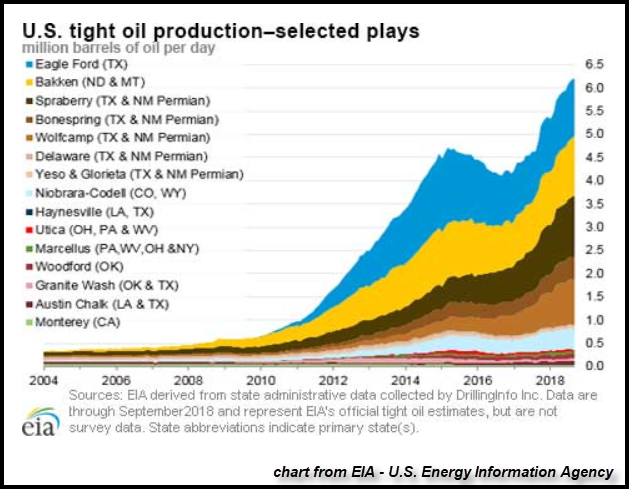 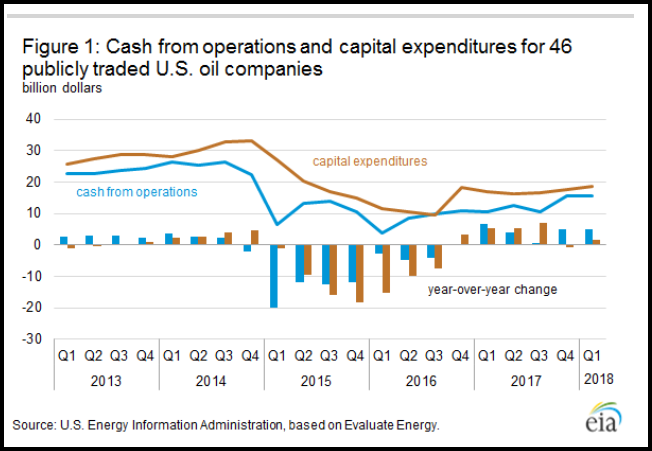 You will notice that capital expenditures (brown line) are still higher than cash from operations (blue line).  So, it doesn’t seem to matter if the oil price is over $100 (2013-2014) or less than $70 (2017-2018), the shale oil industry continues to spend more money than it’s making.  The shale energy companies have resorted to selling assets, issuing stock and increasing debt to supplement their inadequate cash flow to fund operations.

A perfect example of this in practice is Pioneer Resources… the number one shale oil producer in the mighty Permian.  While most companies increased their debt to fund operations, Pioneer decided to take advantage of its high stock price by raising money via share dilution.  Pioneer’s outstanding shares ballooned from 115 million shares in 2010 to 170 million by 2017.  From 2011 to 2016, Pioneer issued a staggering $5.4 billion in new stock: 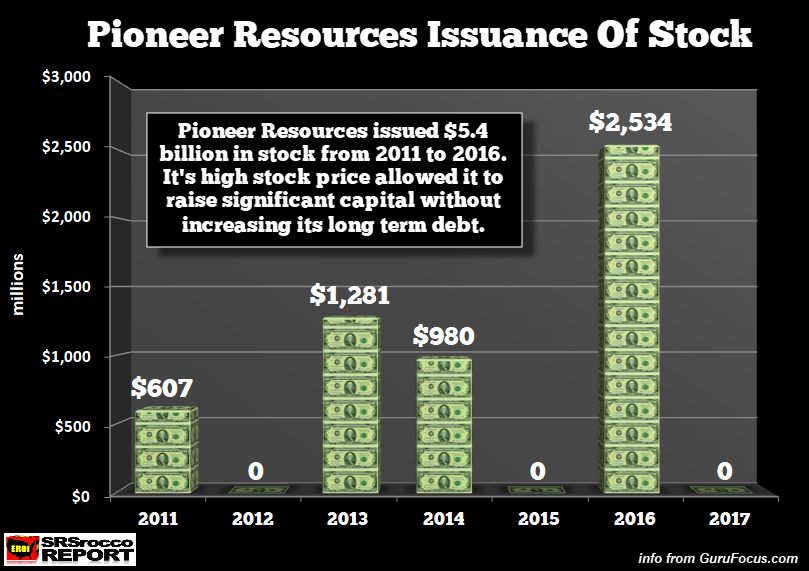 So, as Pioneer issued over $5 billion in stock to produce unprofitable shale oil and gas, Continental Resources racked up more than $5 billion in debt during the same period.  These are both examples of “Ponzi Finance.”  Thus, the shale energy industry has been quite creative in hoodwinking both the shareholder and capital investor.

Now, there is no coincidence that I have focused my research on Pioneer and Continental Resources.  While Continental is the poster child of what’s horribly wrong with the shale oil industry in the Bakken, Pioneer is a role model for the same sort of insanity and delusional thinking taking place in the Permian.

To be able to understand what is going on in the U.S. shale industry, you have to be clever enough to ignore the “Techno-jargon” in the press releases and read between the lines.  As mentioned above, Pioneer stated that it was going to add a lot more of its “high-tech” Version 3.0+ completion wells in the second half of 2018 because they were outperforming the older versions.

Well, I hope this is true because Pioneer’s first half 2018 production results in the Permian were quite disappointing compared to the previous period.  If we compare the increase of Pioneer’s shale oil production in the Permian versus its capital expenditures, something must be seriously wrong.

First, let’s look at a breakdown of Pioneer’s Permian energy production from their September 2018 Investor Presentation:

READ  Financial Blowout Ahead: Lobotomized Economists Clash On The Deck Of The Titanic

Secondly, by comparing the increase of Pioneer’s quarterly shale oil production in the Permian with its capital expenditures, the results are less than satisfactory: 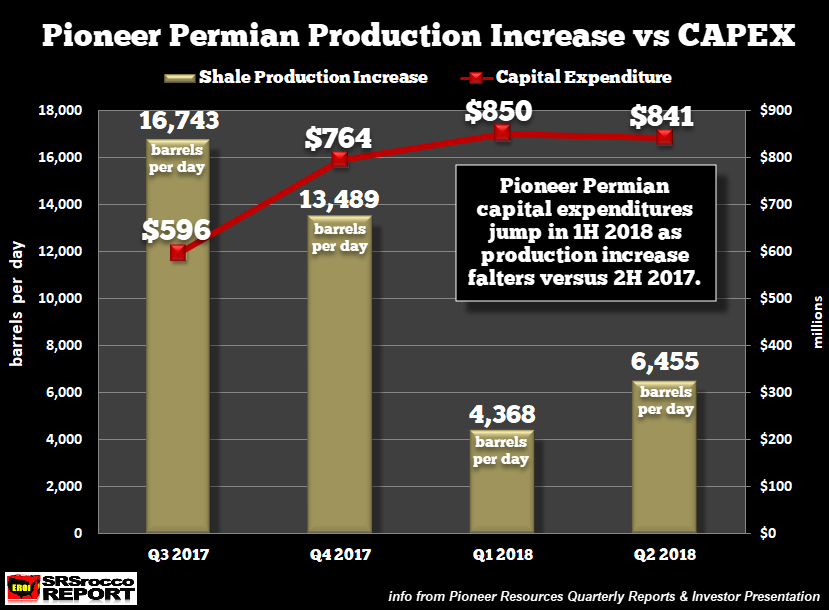 The RED LINE shows the amount of capital expenditures spent each quarter while the OLIVE colored BARS represent the increase in Permian shale oil production.  To simplify the figures in this chart, I made the following graphic below: 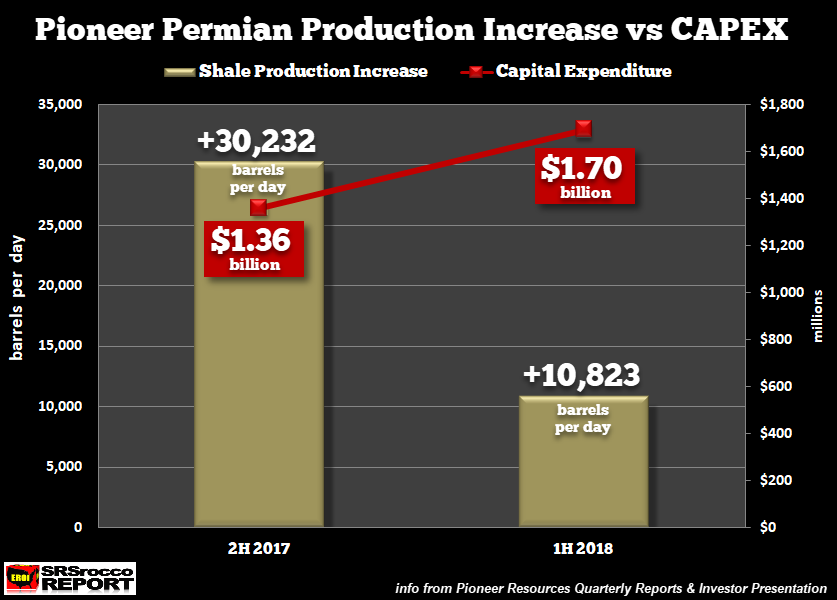 Pioneer spent $1.36 billion in the second half of 2017 to increase its Permian shale oil production by 30,232 barrels per day (bopd) compared to $1.7 billion in the first half of 2018 which only resulted in an additional 10,832 bopd.  Folks, it seems as if something seriously went wrong for Pioneer in the Permian as the expenditure of $340 million more CAPEX resulted in two-thirds less the production growth versus the previous period.

Third, while Pioneer  (stock ticker PXD) proudly lists that they are one of the lowest cost shale producers in the industry, they still suffer from negative free cash flow: 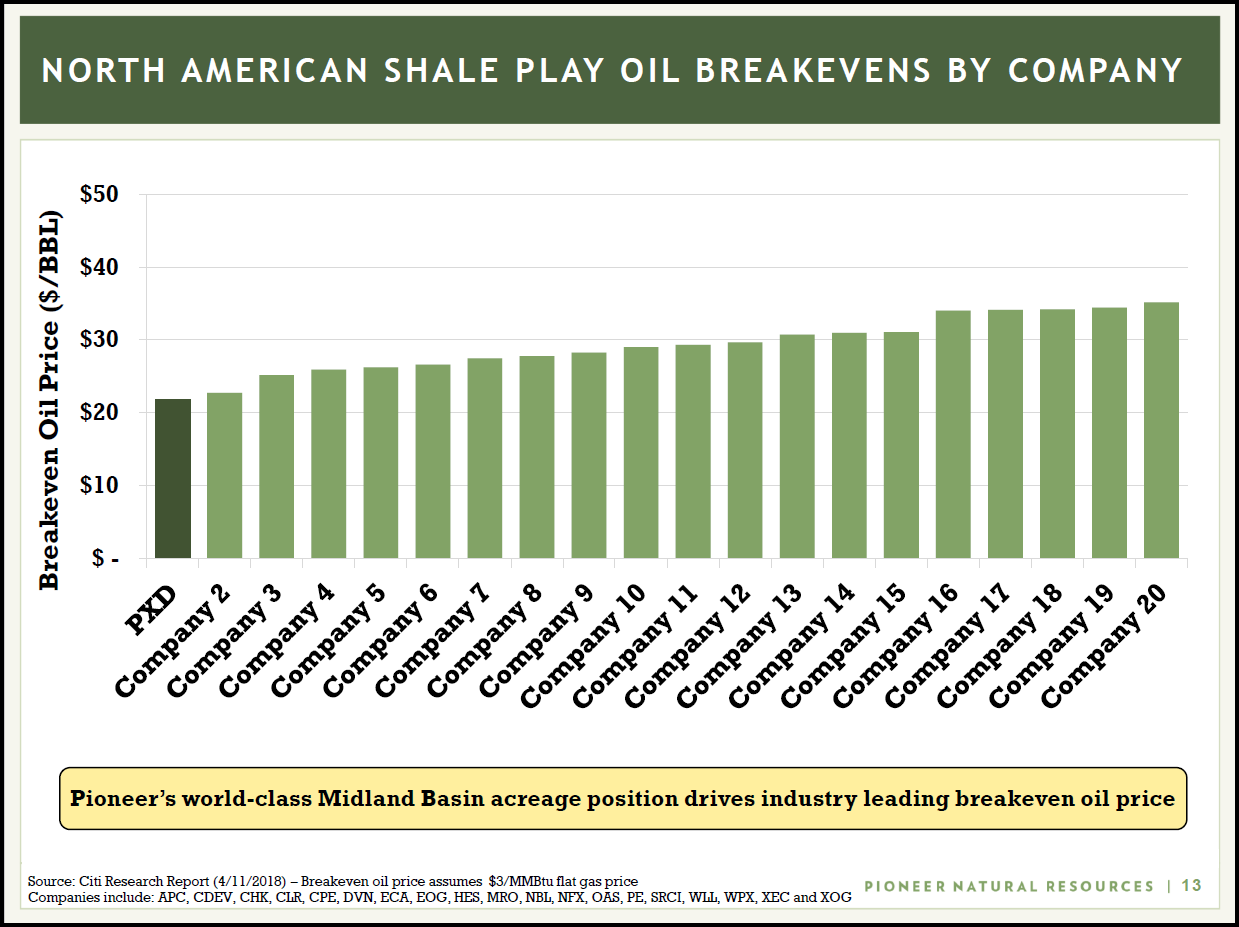 As we can see, Pioneer lists their breakeven oil price at approximately $22, which is downright hilarious when they spent $132 million more on capital expenditures than the made in cash from operations: 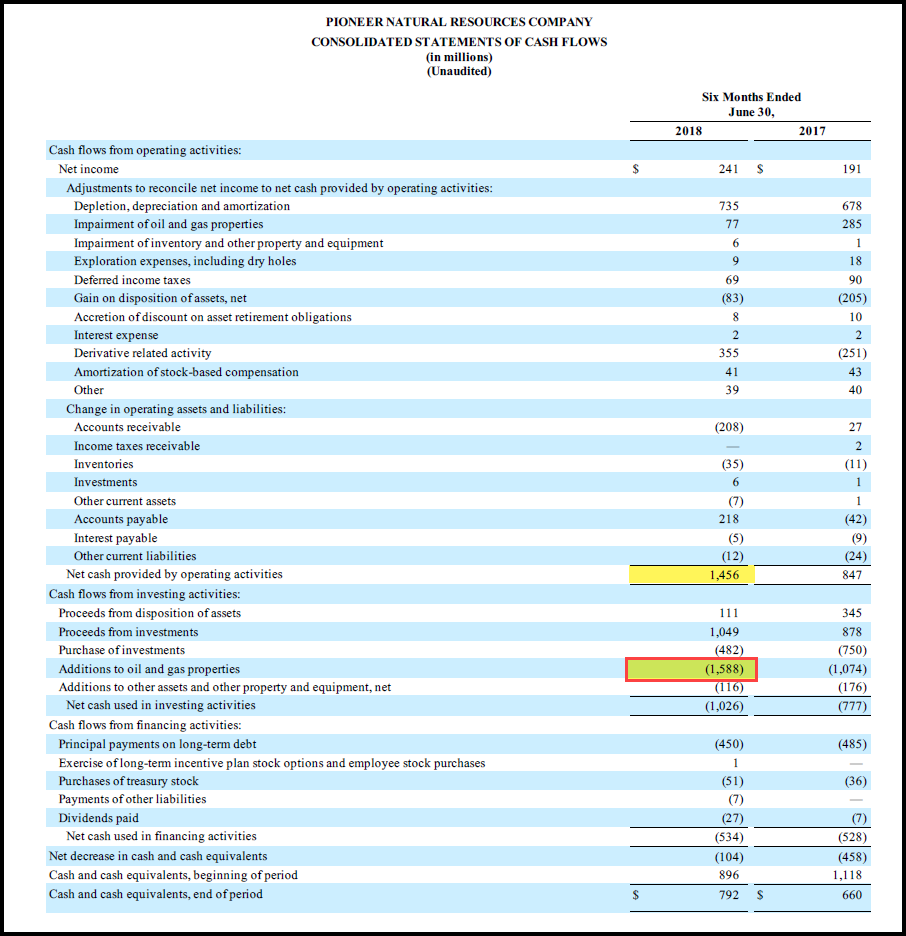 For example, Pioneer brought on 130 new wells in the first half of 2018 and spent $1.7 billion on CAPEX (capital expenditures) versus 125 wells and $1.36 billion in 2H 2017.  I have seen estimates that it cost approximately $9 million for Pioneer to drill a horizontal shale well in the Permian.  Thus, the 130 wells cost nearly $1.2 billion.

Regardless, the U.S. shale oil industry continues to spend more money than they make from operations.  While energy companies may have enjoyed lower costs when the industry was gutted by super-low oil prices in 2015 and 2016, it seems as if inflation has made its way back into the shale patch.  Rising energy prices translate to higher costs for the shale energy industry.  Rinse and repeat.

Unfortunately, when the stock markets finally crack, so will energy and commodity prices.  Falling oil prices will cause severe damage to the Shale Industry as it struggles to stay afloat by selling assets, issuing stock and increasing debt to continue producing unprofitable oil.

I believe the U.S. Shale Oil Industry will suffer catastrophic failure from the impact of deflationary oil prices along with peaking production.  While U.S. Shale Oil production has increased exponentially over the past decade, it will likely come down even faster.