Rasmussen Reports surveyed 1,000 people earlier this week and found Republicans are significantly madder than Democrats about the treatment of Supreme Court Justice Brett Kavanaugh during his confirmation and the GOPers are also more likely to vote as a result.

Rasmussen also says its latest generic ballot survey shows voters split evenly, 45-45, on which party’s candidates they plan to support on election day. Remember, Rasmussen only talks to likely voters, who are routinely better barometers for election day than folks who are only registered voters.

Go here for the rest of the story, he says modestly.

To be clear, that’s a Five followed by two Zeros.

Both Republicans and Democrats are reporting a massive fundraising surge in the past few weeks as a result of the bitter and contentious confirmation process for Supreme Court Justice Brett Kavanaugh — but Republicans seem to have the edge.

“We’ve seen a 500 percent increase in our fundraising at the end of the month as tensions have been boiling over in Washington and voters have started to pay attention,” Republican National Committee Chairwoman Ronna McDaniel explained on Fox News Tuesday.

DON’T GET COCKY: What to Expect in the Midterm Elections for the GOP.

Consider the dichotomy that has emerged in the last week: We saw people like Erick Erickson, who once wrote a piece headlined “I Will Not Vote For Donald Trump. Ever,” suggesting they will vote for Trump in 2020, and people like Tom Nichols, formerly of The Federalist, saying Kavanaugh’s confirmation was the final straw (he quit the GOP).

Nichols and Erickson reacted to the exact same news in exactly opposite ways.

The Kavanaugh hearing essentially radicalized Never Trumpers. Some—as part of the GOP base’s backlash against the left’s attacks—are coming home and supporting Trump. Others—perhaps because their hatred of Trump has only intensified—were pushed completely from the fold. This process has been going on for a long time, but one gets the sense that the fight over Kavanaugh was the end of the road.

Where you stand on this probably depends on where you sit. Personally, I see the group who submitted to their Trumpy fate as making an understandable submission to the inexorable forces of tribalism and partisanship. Consider Erickson’s plight. If you are a conservative, you, too, might well be repelled by the left’s behavior last week.

The allegations against Kavanaugh were never shown to have any merit — that is, those that weren’t debunked, refuted, or recanted. Nevertheless, the Left’s smear job was as nasty as it was vociferous, and amplified around the world, 24/7, by the Resistance-MSM.

So no matter what else anyone might think of President Trump, the fact that he stood by his nominee throughout this unprecedented savaging is itself unprecedented — and praiseworthy in the extreme. I can’t imagine how Trump’s selection and protection of a good man and a well-qualified jurist could cause any conservative or right-leaning libertarian to put moredistance between themselves and Trump.

Except of course, for those whose iron rice bowls or NOKD-snobbery have become more important than their oft-stated principles. 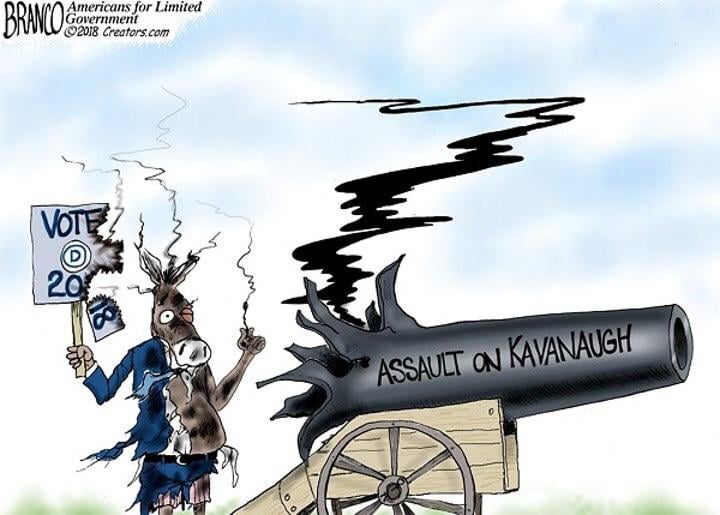