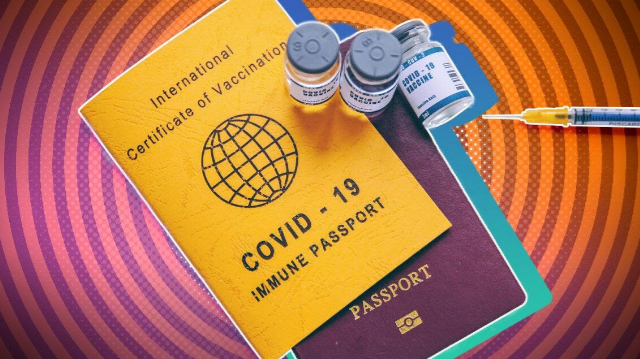 This is not a theory of mine, but full admission on behalf of the UK government. Yeah, I know, no one could ever have predicted it, amirite?

The government is using the threat of domestic vaccine passports to coax and cajole people into getting fully vaccinated, the foreign secretary has admitted.

Dominic Raab said ministers did not want to “hold the country back” just because some individuals were not coming forward to get inoculated, confirming publicly what many suspected about Boris Johnson’s sudden decision to throw his weight behind certification for nightclubs.

In a U-turn last week, the prime minister announced that documentation would be compulsory for those gathering in crowded indoor venues across England from the end of September.

Nor did Johnson and Raab rule out university students needing to be fully vaccinated to live in halls of residence, and the Cabinet Office minister, Michael Gove, recently suggested it may be a requirement for fans at Premier League matches next season. Chelsea FC has already said it will require people attending matches at Stamford Bridge to provide proof of being fully vaccinated.

Raab said he had seen first-hand in France that when people were told they would need domestic vaccine passports to access certain venues and events there was a “big surge” in people coming forward for their jabs.

He also said that if businesses required a certain level of safety from customers, then people who remained unvaccinated by choice should not be surprised if they were barred, accusing them of “putting other people’s health and lives at risk”.

Will university students in England have to be double vaccinated to attend in person teaching? Foreign Secretary Dominic Raab tells @JustinOnWeb decisions will be taken in September t.co/Nu3EgnXXKO #R4Today pic.twitter.com/057IJRDM60

It’s pretty obvious that forcing people into medical procedures (vaccines are medical procedures, never mind gene altering technology like mRNA) against their will is illegal, and this has been pointed out by people all over the world.

This kind of behavior from so-called democratic/liberal (oh the irony) governments violates the Nuremberg Code adopted post WW2, which was established as international law to prevent people from being coerced into medical experiments.

See also  More people have been dying this year due to irregular heartbeat, official figures suggest

The mRNA vaccines are highly experimental, they are not approved by the CDC, and we have zero official data on short/medium/long term effects. What we already know is that a lot of people are dying from complications and many had their lives destroyed after getting jabbed.

Needless to say, people in the UK are not happy about becoming cattle:

#Coercion, by any other name – "the action of making somebody do something that they do not want to do, using force or threatening to use force" OED #Coax #Cajole #Raab #GMB t.co/OBF4LV2GGU

Let's just remember that once upon a time @DominicRaab was a staunch believer in civil liberties and opponent of ID cards. t.co/C29DMT3zZP

This is disgraceful, this is not governing, this is dictating, coercing and emotionally manipulating on a scale never before seen in this country. We must fight this, especially as Christians, church leaders please stand up and be counted:t.co/UpEJz4xwGW

Obviously, it doesn’t matter that the people are complaining or protesting in the streets. The only thing that matters to these psychopaths in power is full control over society, and in order to achieve it, they will force everyone to bend to their agenda by hook or by crook.

The more people are getting the covid jab, the more power the psychopaths have. And while the vaccination passport is about coercion on one level, that isn’t its long term agenda.

The long term agenda is to create a permanent technological control grid, which forces everyone to totally submit to having their every movement tracked by a centralized government.

It’s pretty obvious that once people were forced into this high-tech grid, they will not be able to opt out and the government will never give us back our freedoms.

It’s just like what happened after 9/11: all the so-called temporary anti-terror security measures are still in place 20 years later, just like the anti-Constitutional Patriot Act, which has obliterated civil liberties, and it’s now used against White patriotic Americans who disagree with the illegitimate Biden regime.

In the same way, the Vaxx Pass will be used to stop people from doing too much global warming, i.e. to travel by airplane, by car, eat too much meat, you name it.

In the UK is the government doing it, in the United States it will be corporations enforcing vaccine passports, because “muh private companies can do whatever they want”. And if you don’t agree, you’re a socialist and you’re a Putin shill.

It’s all so very obvious, but people are just incredibly stupid

You should read this by the way. Here’s an excerpt:

This amazing FDA document goes to say the Agency has granted emergency approval to 59 different PCR tests since the beginning of the (fake) pandemic. 59. And, “…it is not feasible to precisely compare the performance of various tests that used contrived specimens because each test validated performance using samples derived from different gene specific, synthetic, or genomic nucleic acid sources.”

Translation: Each of the 59 different PCR tests for SARS-CoV-2 told different lies and concocted different fabrications about the genetic makeup of the virus—the virus we didn’t have. Obviously, then, these tests would give unreliable results.

BUT, don’t worry, be happy, because NOW, the CDC and the FDA say, they really do have actual virus samples of SARS-CoV-2 from patients; they have better targets for the PCR test, and labs should start gearing up for the new and improved tests.

In other words, they were lying THEN, but they’re not lying NOW. They were “contriving,” but now they’re telling the truth.