On Friday we got some insight into the state of play of UK output and GDP in April with the caveats I pointed out at the time. This morning has seen us receive the official figures on employment, unemployment and wages which shed with caveats further insight as to where we are. So let us take a look at the opening line.

Early indicators for May 2020 suggest that the number of employees in the UK on payrolls is down over 600,000 compared with March 2020. The Claimant Count has continued to rise, enhancements to Universal Credit as part of the UK government’s response to the coronavirus (COVID-19) mean an increase in the number of people eligible.

There is quite a bit going on in that paragraph and it is hard to avoid a wry smile at us being directed towards the Claimant Count that was first regarded as unreliable and manipulated back in the 1980s in the Yes Minister TV series,

Sir Humphrey: We didn’t raise it to enable them to learn more! We raised it to keep teenagers off the job market and hold down the unemployment figures.

There is also an episode where Jim Hacker tells us nobody actually believes the unemployment ( Claimant Count) numbers. The tweek to the Universal Credit system is welcome in helping people in trouble but does also add more smoke to the view.

We can dig deeper and let us start with a little more precision.

Let me give our statisticians credit for looking at other sources of data to glean more information. But in this area there is an elephant in the room and it is a large one.

The International Labour Organization (ILO) definition of employment includes those who worked in a job for at least one hour and those temporarily absent from a job.

Regular readers of my work will be aware of this issue but there is more.

Workers furloughed under the Coronavirus Job Retention Scheme (CJRS), or who are self-employed but temporarily not in work, have a reasonable expectation of returning to their jobs after a temporary period of absence. Therefore, they are classified as employed under the ILO definition.

As the estimate for them is of the order of 6 million we find that our employment fall estimate could be out by a factor of ten! Breaking it down there are all sorts of categories from those who will be unemployed as soon as the scheme ends to those who have been working as well ( sometimes for the same employer) who may be getting an official knock on the door. Also the numbers keep rising as HM Treasury has pointed out today.

So the best guide we have comes from this in my opinion.

In terms of a graph we have quite a lurch. 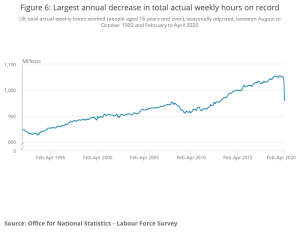 I doubt many of you will be surprised to learn this bit.

The “accommodation and food service activities” industrial sector saw the biggest fall in average actual hours; down 6.9 hours to 21.2 hours per week.

With hotels shut and restaurants doing take out at best I am in fact surprised the numbers have not fallen further.

The conventional measures are simply not cutting it.

For February to April 2020: the estimated UK unemployment rate for all people was 3.9%; 0.1 percentage points higher than a year earlier but unchanged on the previous quarter.

We can apply the methodology I used for Italy on the 3rd of this month where we discovered that a flaw  meant that we found what we would regard as unemployed in the inactivity data.

The single-month estimate for the economic inactivity rate, for people aged 16 to 64 years in the UK, for April 2020, was 20.9%, the highest since August 2019. This represents an increase of 0.7 percentage points on the previous month (March 2020) and a record increase of 0.8 percentage points compared with three months ago (January 2020).

I doubt anyone is going to be too surprised by the fall here.

Estimated annual growth in average weekly earnings for employees in Great Britain in the three months to April 2020 was 1.0% for total pay (including bonuses) and 1.7% for regular pay (excluding bonuses).

It is quite a drop on what we had before.

Annual growth has slowed sharply for both total and regular pay compared with the period prior to introduction of the corona virus lockdown measures (December to February 2020), when it was 2.9%.

We see that bonuses plunged if we throw a veil over the double negative below.

The difference between the two measures is because of subdued bonuses, which fell by an average negative 6.8% (in nominal terms) in the three months February to April 2020.

If we look at April alone we get an even grimmer picture.

Single month growth in average weekly earnings for April 2020 was negative 0.9% for total pay and 0% for regular pay.

Already real wages were in trouble.

The 1.0% growth in total pay in February to April 2020 translates to a fall of negative 0.4% in real terms (that is, total pay grew slower than inflation); in comparison, regular pay grew in real terms, by 0.4%, the difference being driven by subdued bonuses in recent months.

So even using the woeful official measure driven by Imputed Rents we see a real wages decline of 1.8% in April. A much more realistic measure is of course the Retail Prices Index or RPI which shows a 2.4% fall for real wages in April.

On this subject there has been some research from my alma mater the LSE giving more power to the RPI’s elbow.

Aggregate month-to-month inflation was 2.4% in the first month of lockdown, a rate over 10 times higher than in preceding months.

I will look at this more when we come to the UK inflation data but it is another nail on the coffin for official claims and if I may be so bold a slap on the back for my arguments.

Today’s journey shows that with a little thought and application we can do better than the official data. Our estimate of the unemployment rate of 5.1% is more realistic than the official 3.9% although the weakness is an inability to allow for what must be underemployment on a grand scale. Shifting to real wages we fear that they may have fallen by over 3% in April as opposed to the official headline of a 0.4% fall. So we get closer to reality even when it is an unattractive one.

Staying with wages the numbers are being influenced by this.

Pay estimates are based on all employees on company payrolls, including those who have been furloughed under the Coronavirus Job Retention Scheme (CJRS).

Also Is it rude to point out that we are guided towards the monthly GDP statistics but told that the monthly wages ones ( a much longer running series) are less reliable?. Someone at the UK Statistics Authority needs to get a grip and preferably soon .