2020 has been quite a ride and although we’ve still a month to go, lets review US debt and interest rates. 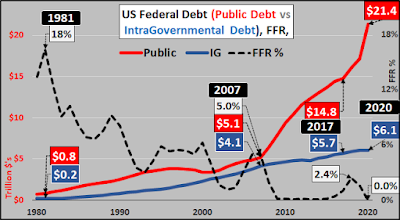 Looking at annual change in marketable and IG debt (below), the aberration that is 2020 should be clear.  It is an explosion of federal marketable debt but concurrently, it is an unexpected and unplanned collapse in under 60 year old population that is coinciding with ZIRP, and an orgy of debt. While population growth in 2019 fell to just 1.55 million, 2020 will likely see less than total population growth of 1 million.  All the net growth will be among 60+ year olds (+1.9 million?) while the under 60 year old population will decline by 800,000…or perhaps a decline as in excess of 1 million. This inverting demographic pyramid, countered by the Federal Reserves ZIRP, QE, and federal government deficit spending is a bridge to nowhere (oh, where could I have heard this before???). 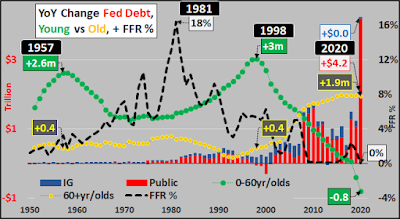 As for who is buying all this Treasury debt, it isn’t foreigners, and it isn’t banks, insurers, or the general US public looking for 1% yields.  It is the Federal Reserve that is maintaining a bid at anything near these rates. 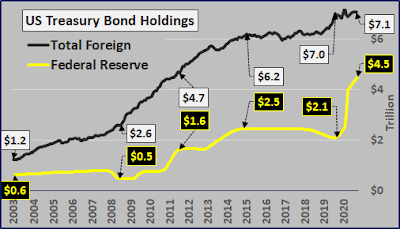 Below, reviewing the Federal Reserves balance sheet, split between holdings of collective Treasury debt and MBS (Mortgage backed securities) vs dollar swap lines, repo’s, etc. “Markets” have become dependent on the Federal Reserves consistent and reliable purchasing of US debt to maintain “confidence” in what is otherwise a broken market. 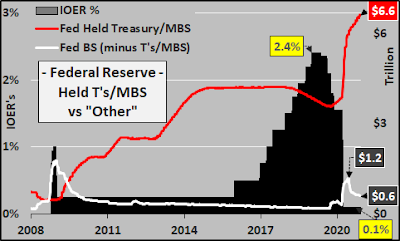 The only duration of US Treasury debt which the Federal Reserve has not yet broken new high ground during the latest round of QE is the 5 to 10 year duration (below)…but that is only a month or two away at the current pace. 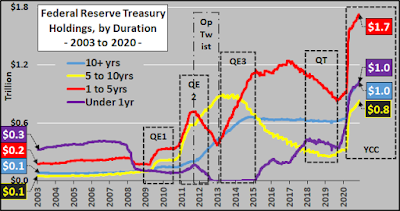 To understand the impact that the Fed’s purchasing has had to distort and avoid free market pricing, consider the following charts showing the Fed’s holdings and the impact on relevant interest rates.

Federal Reserve held less than one year Treasury debt and the resultant 3 month Treasury interest rate.  The short rates continues to be pegged to the floor while Fed net purchasing continues. 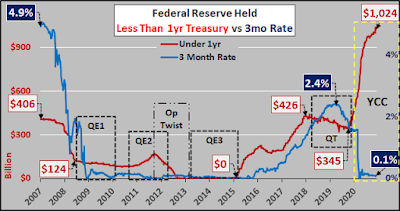 Like the three month Treasury, the three 3 year continues to lurk near the lowest rates in US history…as long as the Fed continues to remain a net purchaser. 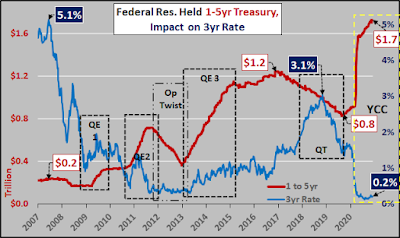 Mid duration Fed holdings have nearly made it back to the peak QE holdings, and although the 10yr is lurking at 2020 highs, rates continue to be lower than any previous time in history. The 10 year is the foundation upon which the 30 year mortgage is based, and between the Fed’s T purchases and MBS buying, the Fed is dead set on pushing mortgage rates ever lower…to maintain the last of the air in the refi and housing bubbles. 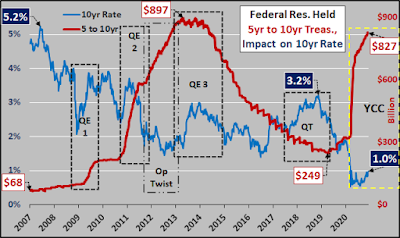 As for the long bond, Fed holdings continue skyrocketing and funny enough, rates just haven’t been able to return to any of the previous range that rates inhabited prior to the Fed’s Yield Curve Control.  Any breakout from here will almost surely be countered by a quickening of Federal Reserve purchasing. It’s that serious and that important that the Fed not allow “free markets” to determine the true rates of US debt. 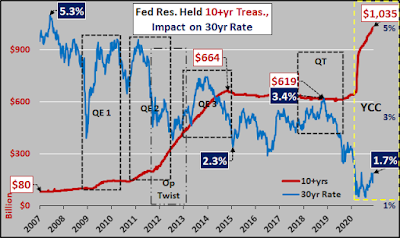 No time for further thoughts tonight…big day of late season hiking tomorrow…and not really sure what I’d say, anyway, beyond the fact that the Fed will control rates, even if they have to print unlimited money to do so. You could probably (almost) take that one to the bank.