The official US government-released unemployment rate is meaningless.

The LFPR measures the employment rate of adults in their prime working years, 25-54. LFPR has fallen 4.4% since 2000. But if you don’t show up as having actively sought employment for a four-week period, poof, you’re magically not ‘unemployed’ anymore.

Think about that. The most disenfranchised workers, those who have (at least temporarily) given up hope of finding a job, are essentially counted as employed in the oft-touted official government unemployment number. So the next time someone cites all-time low unemployment numbers, think of the able-bodied 28-year-old sitting home on a Monday afternoon watching daytime TV while he collects welfare, as he has done for all of the past month.

Because according to the government, he’s employed.

The unemployment rate is calculated using a narrow definition of the workforce. But there are millions of able-bodied men and women between the ages of 25–54 capable of work who are not included in the workforce.

These are not retirees or teenagers but adults in their prime working years. They are, in effect, “missing workers.” The number of these missing workers not included in the official unemployment rolls is measured by the Labor Force Participation Rate, LFPR. 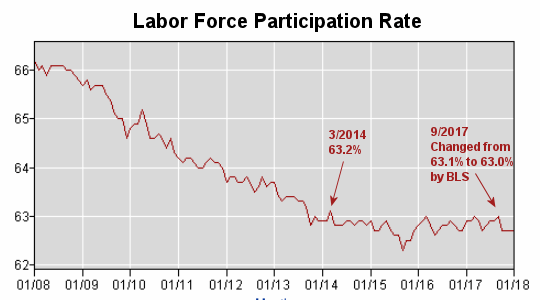 Investors should be reminded that the stock market peaked on Jan. 26, 2018, and is down about 10% since then notwithstanding occasional one-day rallies. The market has traced out a series of “lower highs” after each rally. That’s a sign of a dying bull market and more declines to come.

So don’t believe the TV happy talk. Rigorous analysis of employment, debt, deficits, growth and stock markets reveals a dismal picture. Investors should lighten up on equities and increase their allocations to cash and gold.

ORIGINAL SOURCE: Economic Numbers Are Less Than Meet the Eye by James Rickards at Daily Reckoning on 5/11/18